This update is quite a long one (a lot happened), so let’s dive right in and visit the currently only dorm of Robinson University! Last season, Molly, Jacob and Alvin moved into a little rental home on campus, so we’re now left with three students.

Here’s Thalia Harris, who has three semesters left. She’s a Philosophy major and her LTW is to Max all 7 skills.

Then we’ve got Robin Burke, who has four semesters left and has also chosen a Philosophy major. She wants to be a Media Magnate. 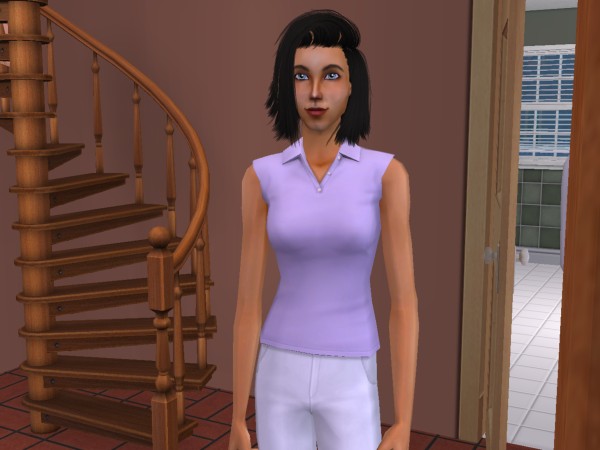 Last but not least there’s Robin’s twin sister Amber Burke, who’s a Drama major because she wants to become a Prestidigitator. 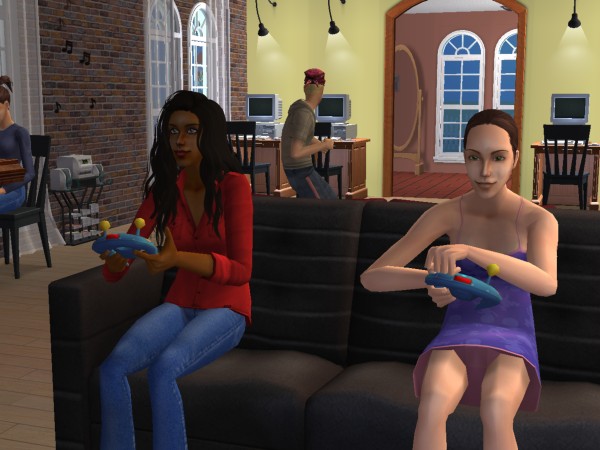 At the start of the new semester, nobody really had much studying on their mind. My general rule is that I make them all go to class and other than that I just let them study (or write papers or do assignments) if they roll the wants for it.

Amber’s sort of dating Trina Wheeler. They only have one bolt, but they’re very cute together, so I’d like to see where it goes.

Students, am I right? 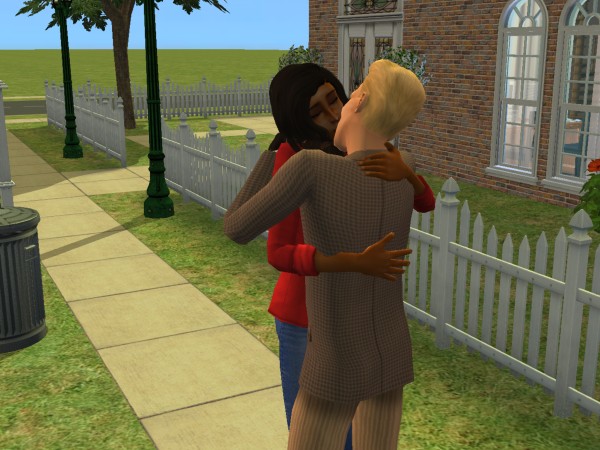 They fell in love with each other, but we’ll see what will come of it because I don’t think Robin is up for something serious. Or wait – I said that and then she rolls both the want and the fear to get engaged to professor Amin (who has the same name as her father by the way). I don’t think she knows what she wants yet.

I decided to have Thalia give Sterling a makeover. They fell in love last rotation and have three bolts, so it’s bound to last, and I think he could look a lot better if he just got a better haircut. I mean, sure, he has an awful nose and his bone structure isn’t great, but a good haircut can work wonders!

Now I actually think they look cute together <3

The girls also liked to all hang out together.

And then… chaos. A tree caught on fire during a thunderstorm. I figured the rain would put it out, but then it stopped raining. Robin went to extinguish the fire, but then she caught fire herself. 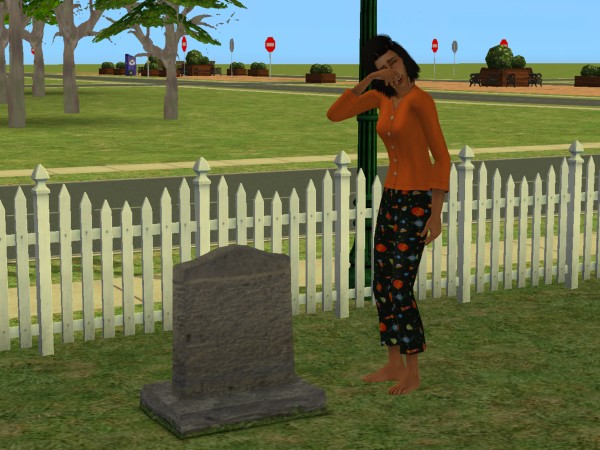 I’m so sorry I killed your twin sister :( 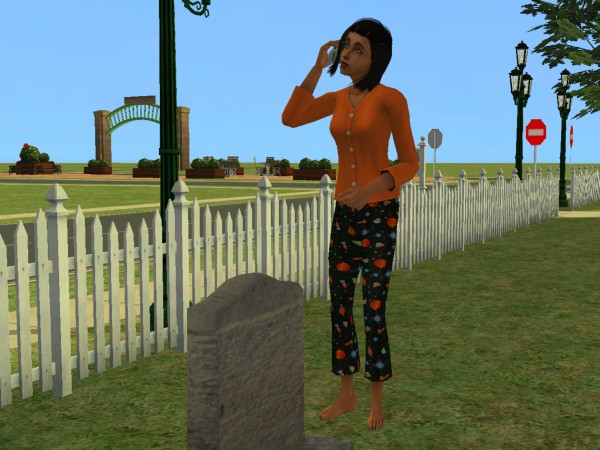 “Dad? Is Mum there? Please sit down, I have to tell you something…” 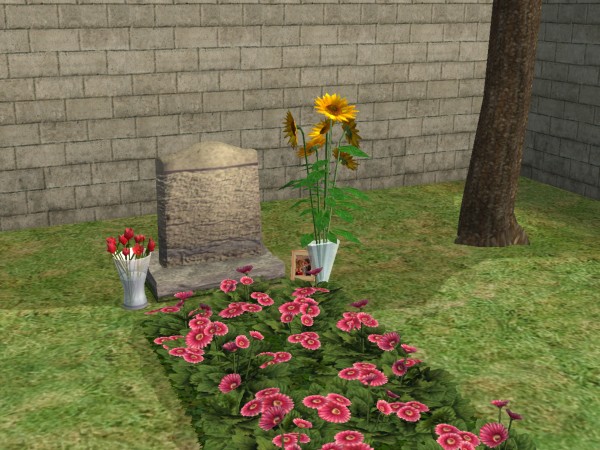 Robin’s grave was moved to Blueberry Island Cemetery. The entire community was shocked and devastated. Including me – this hasn’t happened in my game for… years.

Amber threw herself into her studies.

But mostly she was just very, very sad.

She and Thalia both passed their exams, but neither of them felt very happy about it.

Every time Thalia goes on a date with Sterling, the first want she rolls is to fall in love with Jacob (Dawson, her high school boyfriend). I’m not sure what to do with that!

At the start of the new semester, another set of twins moved into Burke Hall: Carrie and Ella Harris, Thalia’s little sisters. They both declared Literature as their major, because apparently they’re those kind of twins. No, truth be told, it’s a bit of a coincidence: Carrie wants to top Entertainment, and Ella wants to top Adventurer, and Literature works well for both of those.

I predict a lot of Sims on Blueberry Island are going to experience their first Woohoo in this photobooth. Kind of gross if you think about it. 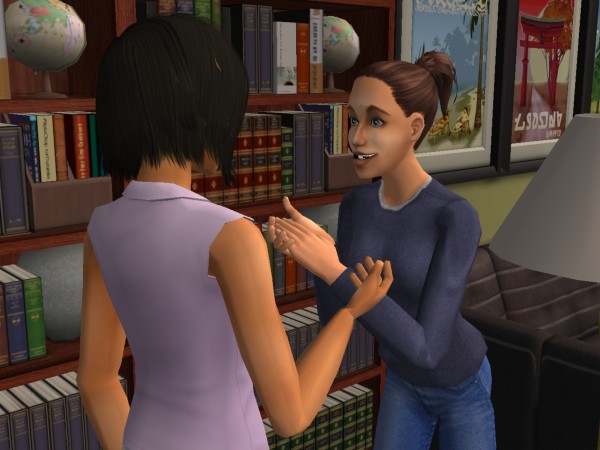 Amber is still dating Trina, but she has two bolts with Lexie here, one of her roommates. I just want to see if there’s something there!

I created a memorial for Robin in the spot where the fateful tree once stood. 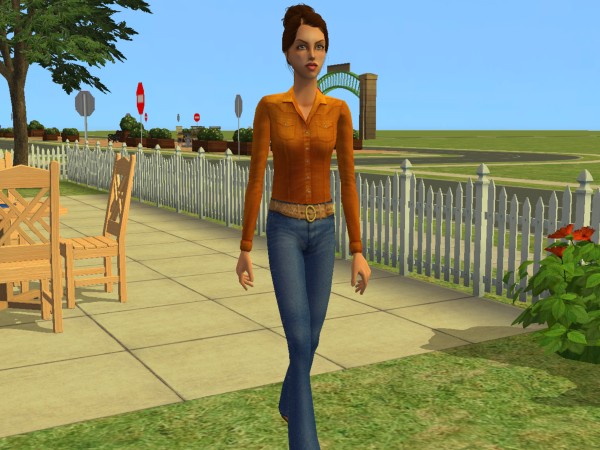 Thalia is starting her last semester! She’ll be the first to graduate, even though Jacob, Molly and Alvin should technically be first. They have fewer semesters left, but they get played later on because they moved out. 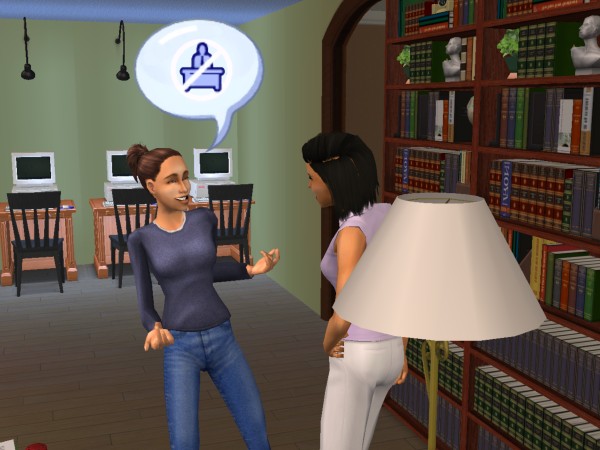 Lexie likes Amber too, but the thing she finds most attractive is that Amber’s unemployed, which is bound to change after she leaves college. Oh well, let’s see where this goes – I like Lexie! 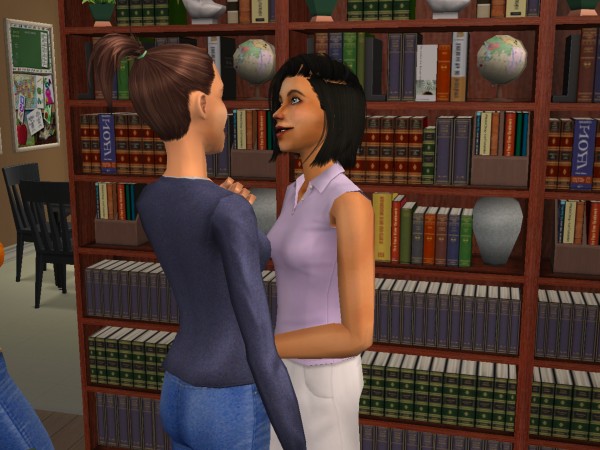 She responds well to Amber’s flirting!

And then ACR took over from me. I think they like each other! Lexie and Amber both had crushes after their autonomous WooHoo. 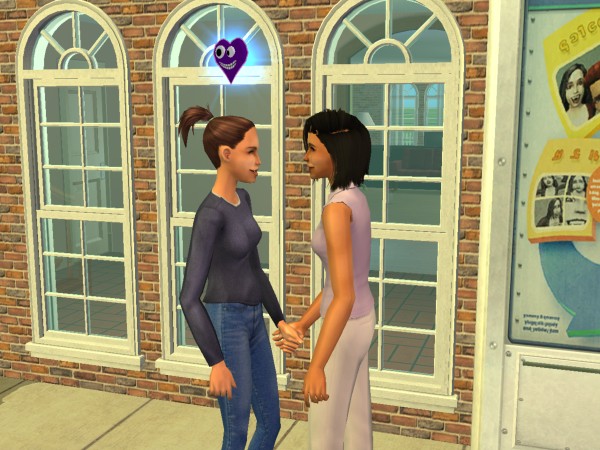 Reason enough for them to go on a date.

She definitely can’t have Trina over anymore, that’s for sure… Lexie would throw a fit – she’s smitten. She didn’t respond negatively to any interactions.

Yep, this is the right match! When the date was over, Amber still rolled wants for Lexie. She hasn’t done that with Trina. I do feel bad for Trina, though.

Ella met Simon Parker. They only have one bolt, but Ella has the want to go on a date, so… 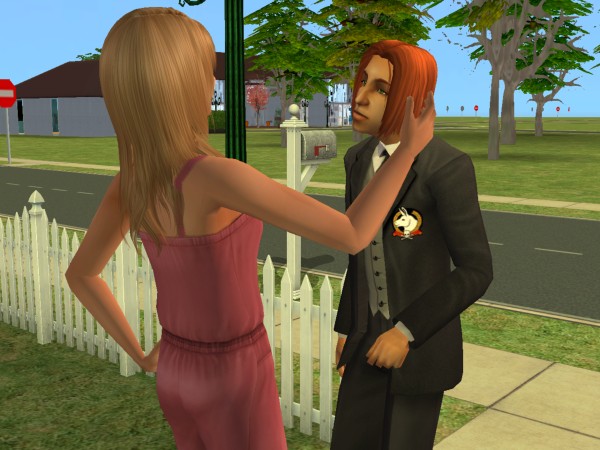 Her twin sister Carrie met a guy with the same hair as Simon, Dawson Ebadi. They have two bolts! That has definite potential. They really hit it off too, but then Carrie had to go to class.

Amber and Lexie fell in love through some more autonomous photobooth Woohoo. 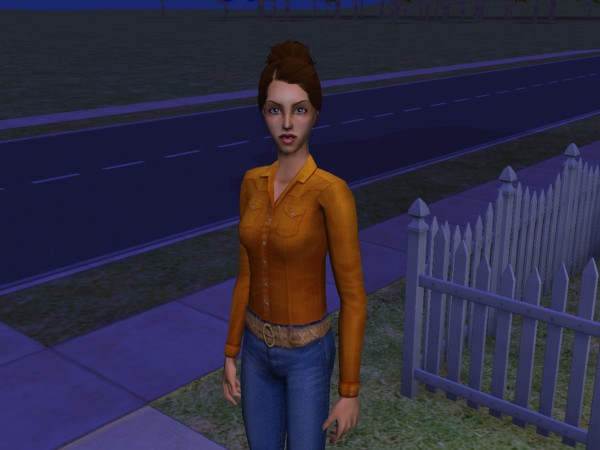 Thalia graduated with honours! She has a GPA of 3.8. Studying wasn’t a big priority for her at first, but as she neared the end of her studies, her Knowledge aspiration started to show itself and she wanted to graduate with honours.

She decided to move back to the island right away. Our first college graduate! That also means that the Science career is now officially unlocked. 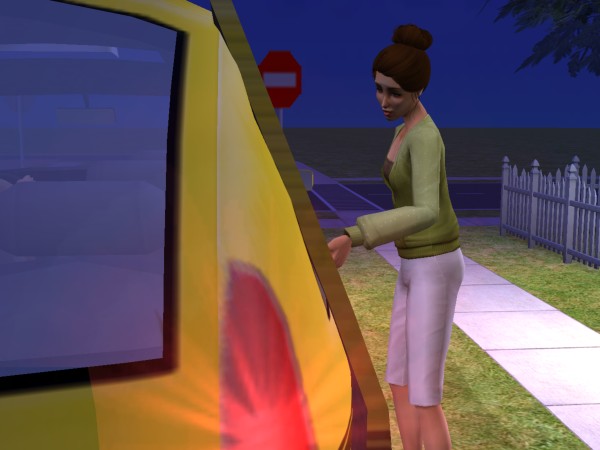 We’ll see Thalia again at the end of the rotation – she still has two days left to be played.

Thalia moving out to be her own household (she moved into one of the apartments on Legacy Lane) also means there are now 20 households – that means I can build another NPC community lot! 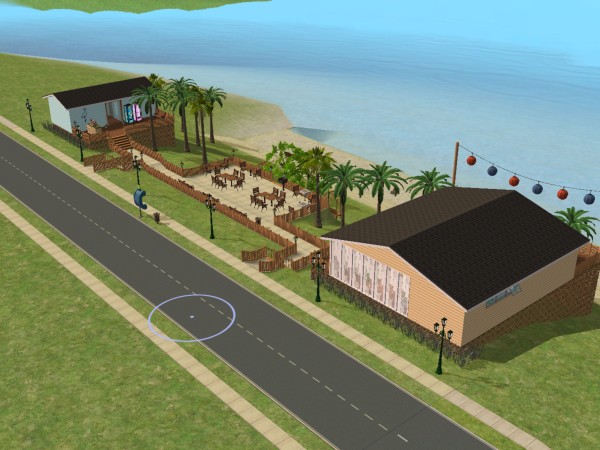 In my excitement, I immediately built a beach lot for all of my Sims to enjoy when summer rolls around next season. There’s also a little restaurant that will fulfil the need of a place to eat that’s more casual than Walker’s. Anyway – back to uni! 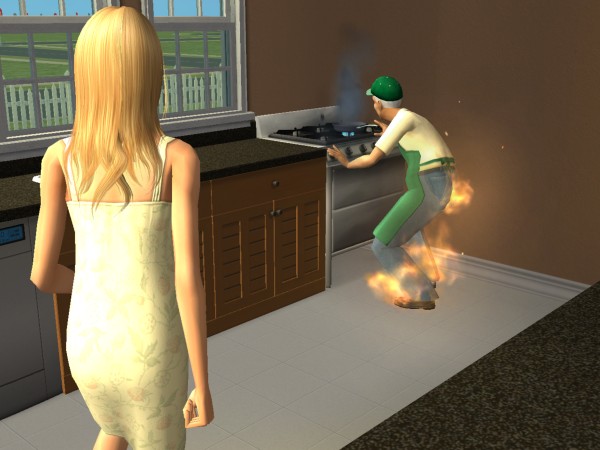 The first thing to happen during the next semester was another fire… CARRIE, DON’T YOU DARE GET CLOSE TO THAT.

Luckily, this time the fire brigade did come on time.

Ella tried her luck with Simon Parker, who she only has one bolt with, but we’ll see if they’re a fun couple or not. Plus, she really wants to kiss someone.

ACR sure has big plans for them.

Yep, it seems like these two are golden. And they haven’t even gone on an actual date yet. In the background, you can see Carrie trying to chat up Dawson Ebadi.

I let Ella go on a date with Simon, which is when I found out he’s a Romance sim. Maybe not the best combination with Ella, who’s Family…

Carrie and Ella really do everything together.

These two are very sweet together, though… 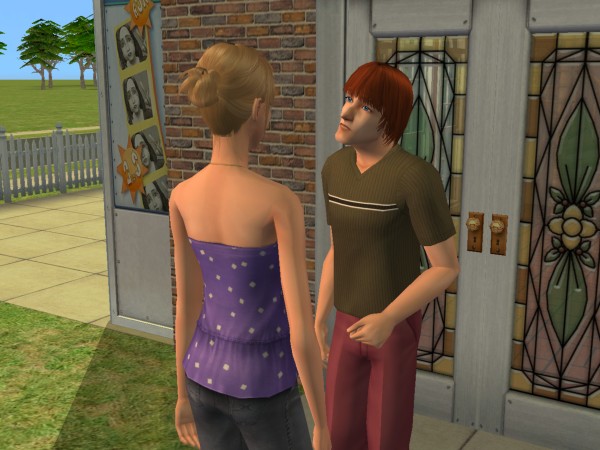 But the next day, she meets Phoenix Raymond, who she has two bolts with.

He’s very shy, which immediately makes me like him more!

This is Amber’s last semester and I’m excited for her to strike out on her own!

Carrie liked Dawson as a friend just fine, but no more than that. She had now set her sights on her dorm mate Peyton Micell!

I have a soft spot for him because I married him into my very first legacy challenge. 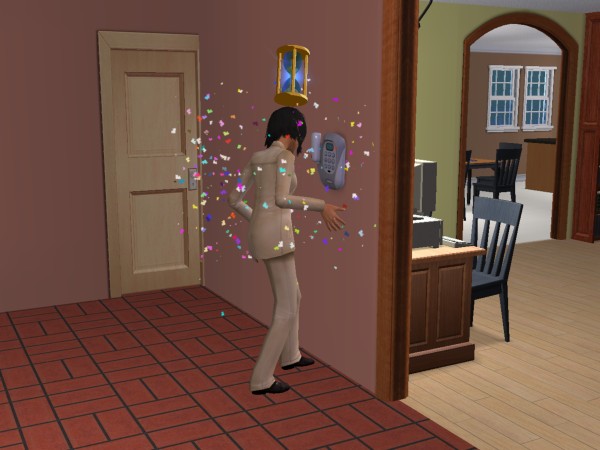 Amber graduated with a 3.6 GPA and was happy to leave university behind. She was extremely sad that her sister wasn’t with her to join the real world, but she was also determined to make something of herself. We’ll see her again later on this rotation! 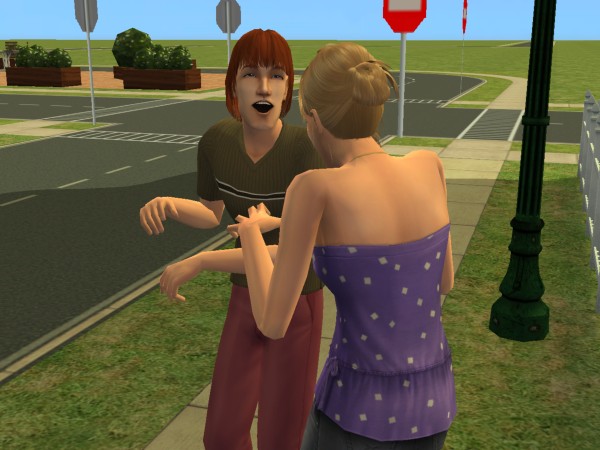 Ella asked Phoenix out on a real date, and I found out that he’s a knowledge Sim. Much more suitable! Also, I like these two together waaay better. 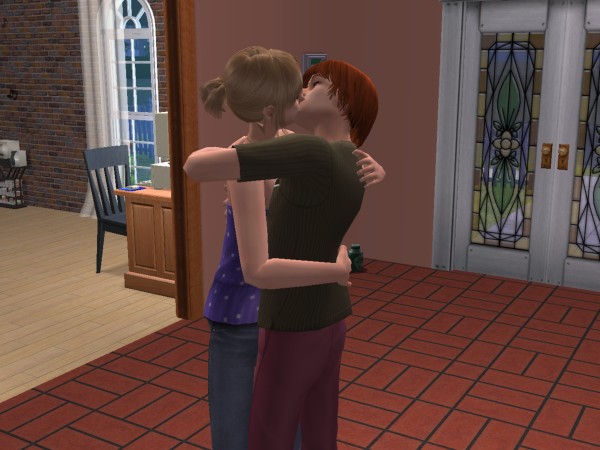 Yep, this is a done deal.

I also realised that Carrie hadn’t had her first kiss yet when she kissed Peyton!

It seems like Sterling has moved on now that Thalia has moved out… I never did really like those two together, even though they are three bolters.

Carrie and Peyton fell in love. 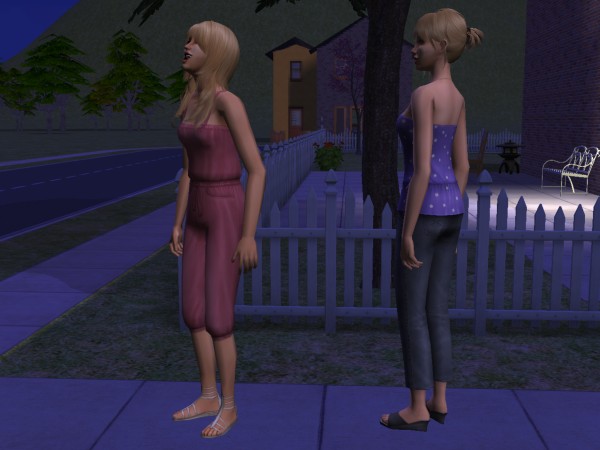 And with both sisters passing their final exam of Sophomore year, we end our visit to Burke Hall! Next up, more uni, but a much quieter household, hopefully.