Hello and welcome to the second instalment of A Bookish Legacy!

The first update was all about generation one (read it here) and now I’m back with generation two. Our generation two heir is Astrid Book, but her younger brother Roald still lives at home as well.

Here’s Astrid! She’s Good, Active and Responsible and she Loves the Outdoors. Her lifetime aspiration is to become a Computer Whiz.

In order to achieve that, the first thing she did as a young adult was take a job in the Tech Guru career.

I love how in The Sims 4 they don’t always go and sit at the same table. Roald started to do his homework outside, and then Paolo went to keep him company with his dinner instead of just sitting down at the regular dining table.

Annie aged up to elder! We didn’t throw a party, because that was too much of a hassle and everyone was hungry and stressed.

The potion collection is now complete, which earns us a Nature point. Roald grew up to Young Adult! His last trait is Goofball (he already had Slob and Bro). His aspiration to become friend of the animals is super annoying because he has to become friends with 12 animals at the same time and play with 2 ghost pets, which I mean COME ON. But I think I’m going to try it… 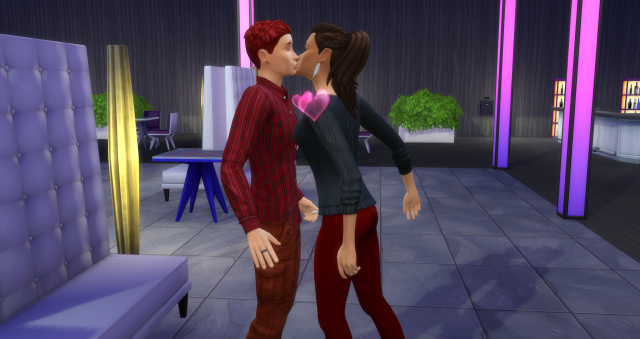 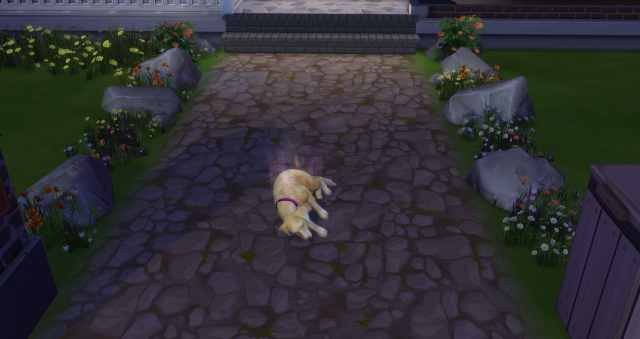 Paolo finally topped the Bodybuilder (Athletic) career! I was out with Roald when it happened, but it happened. It took him quite long enough!

In the meantime, Roald completed the Friend of the Animals aspiration! YES. I thought it would be impossible, but although it was frustrating, it was quite doable once I got the hang of it! Now Roald can move out. He didn’t max any skills, but this aspiration was a tough one to get out of the way. 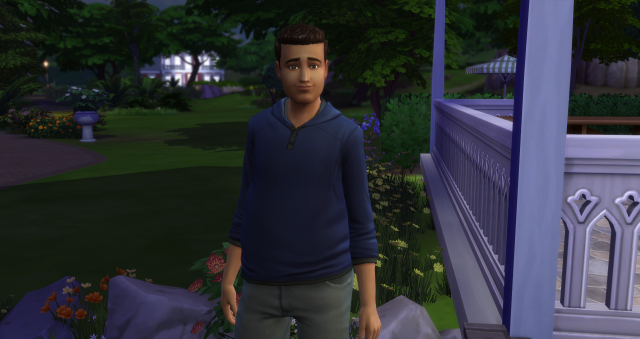 Bye Roald! I didn’t like you at first because you were a terribly annoying kid, but you grew on me. Now, I’ll actually miss you a bit, I think!

Nobuya Hayashi moved in as Astrid’s spouse! He’s got the Grilled Cheese aspiration, which is a hidden one, so that’s fun.

Here he is! I’ve decided to give the Sims I’m moving in minimal make overs. So I only changed the colour of his pants. And his formal wear. He was working in the Criminal career track, but because one of his traits is ‘Good’, this seemed weird to me. So now he works as a Critic! He’ll be a Food critic, to accompany his Grilled Cheese aspiration. 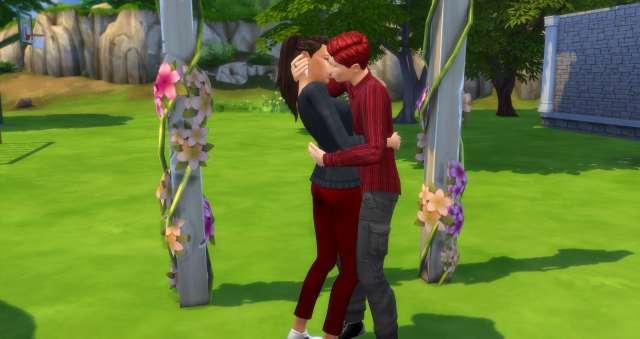 Astrid and Nobuya got married! They managed to get a gold medal wedding party (Roald was there, and Astrid’s best friend Maki), but it was a bit chaotic. I didn’t realise you had to make them wear their formal wear – I thought they’d just do that automatically. And the pianist never showed up. :’) 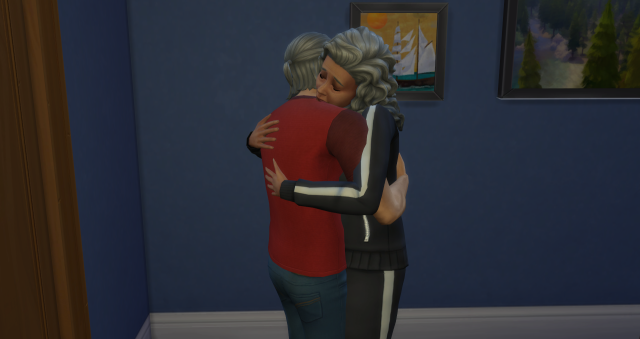 Annie managed to complete one final aspiration; the Soulmate one. 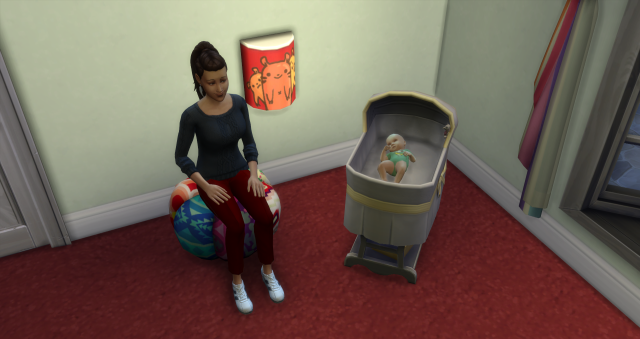 Generation three is here! This is Guus Book, a boy, named after Guus Kuijer, a Dutch writer who wrote the Polleke books I loved as a kid.

Goodbye, Annie. You were the best founder and I’m going to miss you! 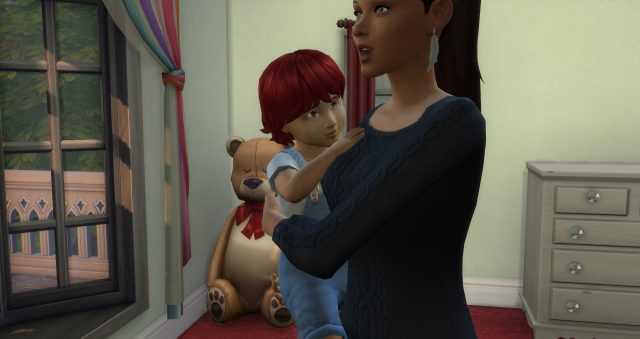 Guus aged up to a toddler; he got the Wild trait. 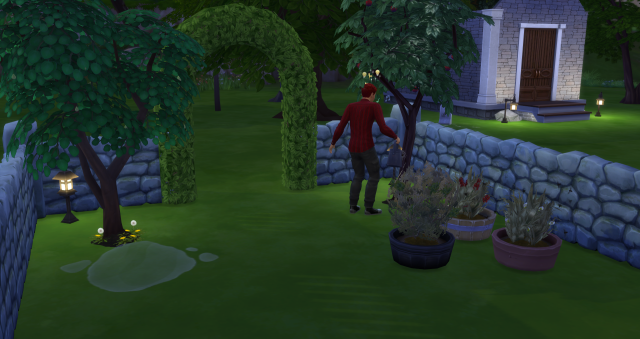 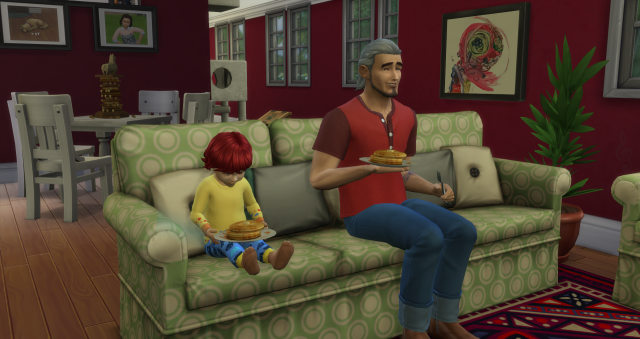 Paolo was a little lost after Annie’s passing, but his grandson kept him on the right track.

Astrid reached the top of the Tech Guru career track while heavily pregnant.

Baby boy Jacques has been born! He’s named after Jacques Vrients, who wrote the Meester Jaap books (among many other great children’s books).

New kitchen! And behind that door is the new laundry room (this is when I got the laundry stuff pack).

Jacques grew up to a toddler and he has the Independent trait. Guus grew up to a child; he rolled the Mean trait! I’d never have chosen that for a legacy Sim/heir myself, but there it is. We’re going to have to deal with it. He also rolled the Social Butterfly aspiration, which we already did for Roald, so I don’t feel like doing it again, but I guess we will.

At first I was annoyed by the fact that Paolo is going to be around for such a long time due to his Long Lived trait, but he does make a good nanny.

Baby number 3 is here! It’s a girl (as I hoped) and her name is Francine (after Francine Oomen, whose books I was obsessed with as a young teenager).

I still love all the Parenting stuff and interactions. Parenthood was such a good pack, and it wasn’t even an entire expansion pack!

It was a sunny day so Paolo hung the wet laundry on the clothesline instead of putting it in the dryer. Love this! 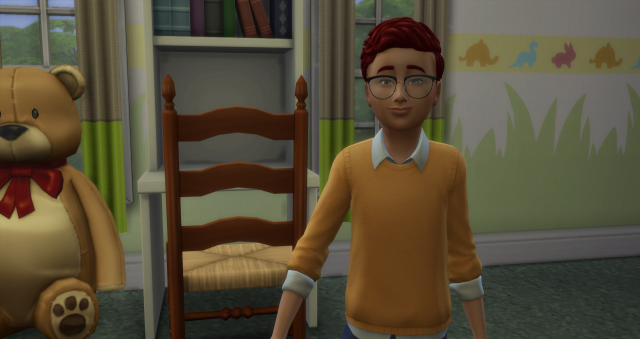 Jacques grew up to a child! His trait is Neat and his aspiration is Artistic Prodigy. 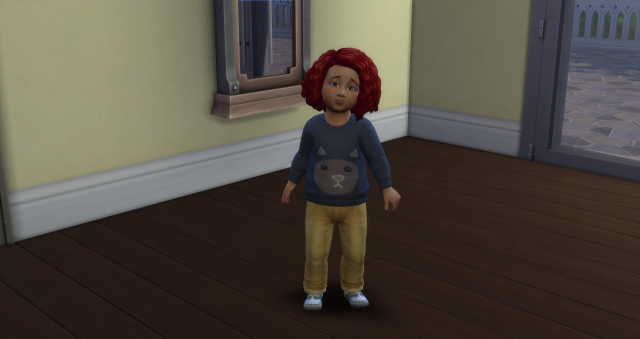 Francine became a toddler, and she has the Charmer trait. I can see why!

I love the new kiddie pool that came with Seasons! 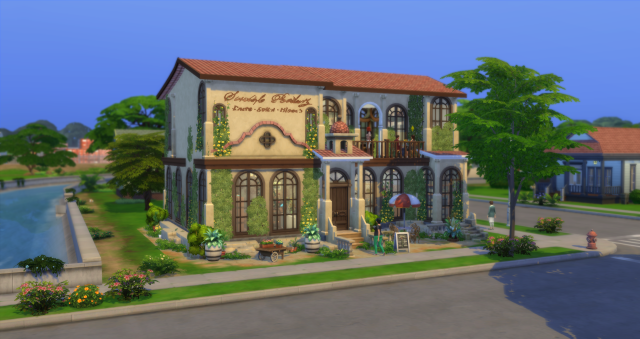 Since Willow Creek didn’t have a restaurant, I downloaded one called Italian Restaurant from the Gallery and Roald invited Astrid to have breakfast there. It’s such a cute place! It makes me want to experiment some more with building in TS4 as well.

The siblings got seated on the balcony, which I thought was nice. It was cool but sunny and they had a great time catching up.

The dryer lint tray caused a fire and for a minute I thought we would lose Jacques! Luckily, Paolo and Astrid put it out. 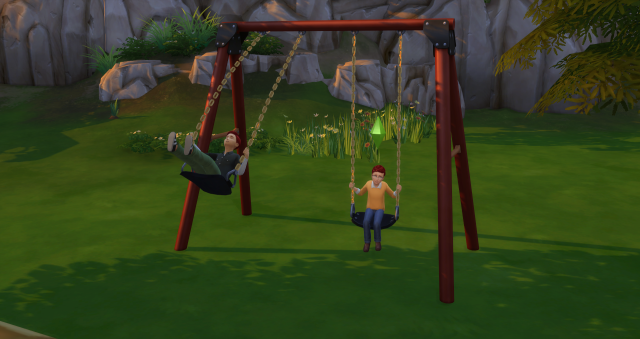 I love that the swing set is back! The brothers had a good time playing out in the garden that afternoon to recover a bit from the fire.

Astrid got a new job since she topped Tech Guru. She’s now an Athlete.

Paolo seems kind of done with it all. He spends most of his time autonomously mixing drinks and then drinking all of them. I wonder how long he will last still.

It was Family Remembrance Day, so everyone had to mourn the dead (in this case Annie). Unfortunately, that wasn’t an option with the urn (only “Read Epitaph” or “Destroy”), so no one could actually fulfil the tradition… Is it because I released the spirit to the Netherworld? Oh, well. I pretended they did it right. This will be the Family holiday that gets a tradition added to it every time an heir dies, as per the rules. Remembrance Day was also Nobuya’s birthday. He’s an elder already, while his kids are still children or younger! He’s probably going to use a Potion of Youth, because he’ll die way too early otherwise. It’s still another 12 days before Astrid ages up.

Just a cute photo of Astrid with her kids in the living room! 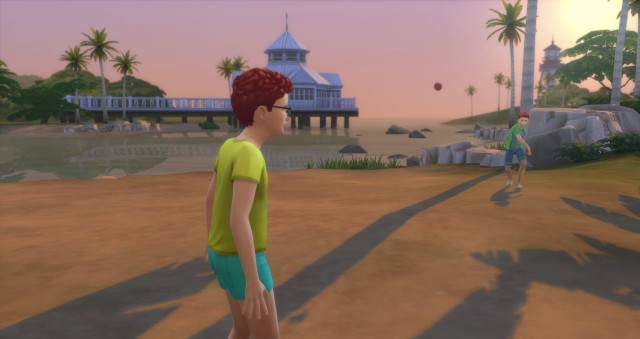 Guus and Jacques had a water balloon fight on a hot summer day.

Guus grew up to a teen (finally)! He rolled the Vegetarian trait as well as the Super Parent aspiration, so we won’t be able to work on fulfilling that one yet. It’s a good aspiration, for an heir, though. He doesn’t look very happy, which might be because he’s Mean, or because he was exhausted here.

A rare instance of everyone (except the toddler) sitting and eating together.

Francine grew up! She’s a Genius with the Whiz Kid aspiration and I love her (I’m on generation five now, in game, and Francine is still one of my favourite Sims!).

While playing a different save game I found out that apparently there’s a produce stall in San Myshuno, so I had Nobuya go over there ASAP to buy some fruits and veggies we didn’t have yet, like lemons and cherries! 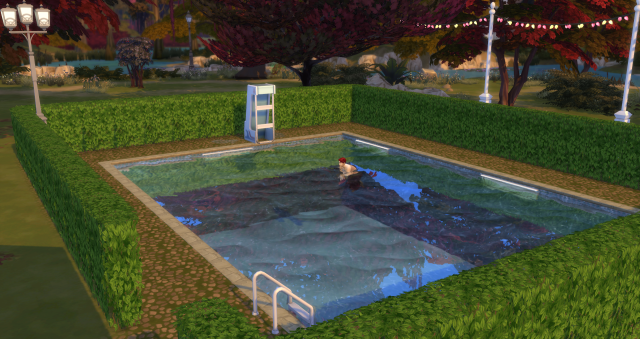 I got the family a swimming pool! Guus went to try it out since he had the wish, even though it was cool outside. 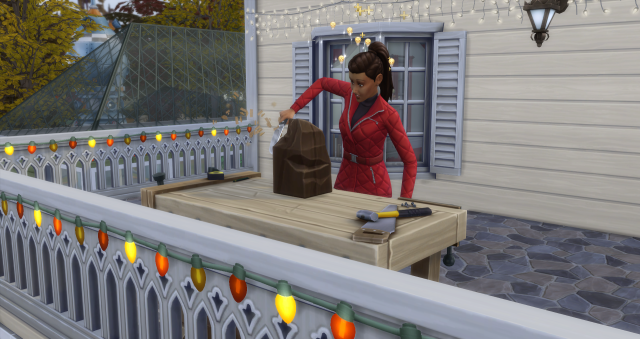 During Harvestfest, Astrid took up a new hobby – woodwork! I had no idea that was connected to the Handiness skill, but that’s pretty cool because I rarely let my Sims fix things – I just replace it.

They had a Grand Meal, but Guus didn’t participate because he is Mean and also a Vegetarian. 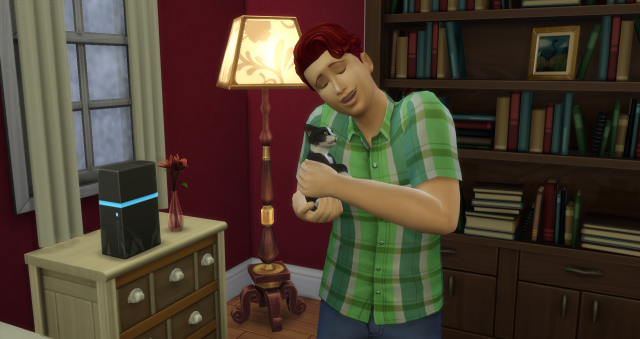 Guus adopted a kitten and we called her Luna. I couldn’t think of a pet from a book, so I decided to go for a Harry Potter theme for the pets (or at least the cats).

Paolo passed away of old age. That’s a pretty big milestone – no one from the first generation is still with us. 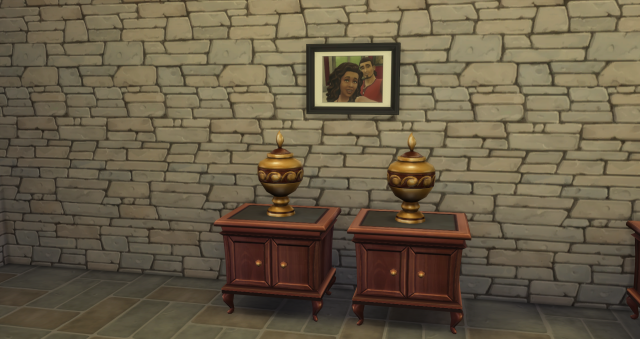 Rest in peace together! 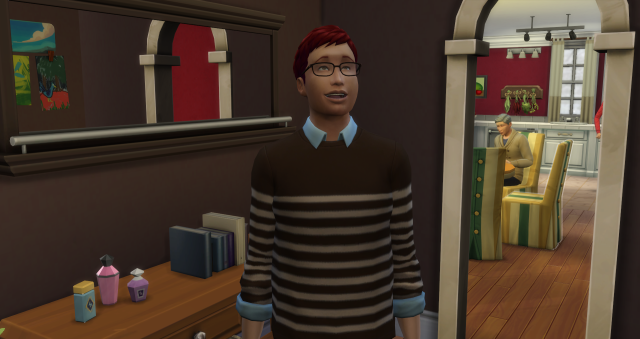 Jacques grew up to a teenager. He rolled the Geek trait, which seems perfect for him. His aspiration is Outdoor Enthusiast, which I think is going to be a bit of a challenge since he will need to go to Granite Falls for it… It does seem like a fun one, though.

Guus is working on his Writing skill since he’ll have to write his own biography and that of the generation after him.

Nobuya drank his one allotted Potion of Youth, because he was nearing death already. Everyone having a Grand Meal together during Winterfest!

Astrid aged up to an elder on the same day as Winterfest.

Guus grew up to Young Adult, so we have ourselves a new reigning heir. It’s going to be an interesting generation, I think, since Guus is a Mean, Vegetarian Loner who’s Insensitive but Responsible with Good Manners, and wants to be a Super Parent. Yup. Gonna be fun!

I hope you enjoyed this update and Happy Simming!