We’re back visiting the McHero family. You might remember twins Matt and Mia “moved” here from Apocalypse Valley, where they lifted the Apocalypse (you can check out that completed challenge in the menu above!). Last season, Matt found a job in his LTW career of Law Enforcement, while Mia worked towards (and got) her gold fishing badge so she could go into her Oceanography (her LTW career). She hasn’t found a position yet. She did meet the love of her life, though, so that was good. Tyler moved into the apartment with Matt and Mia at the end of the season. Also, Mia opened business called Under the Sea Fish Market.

Let’s see what they get up to! 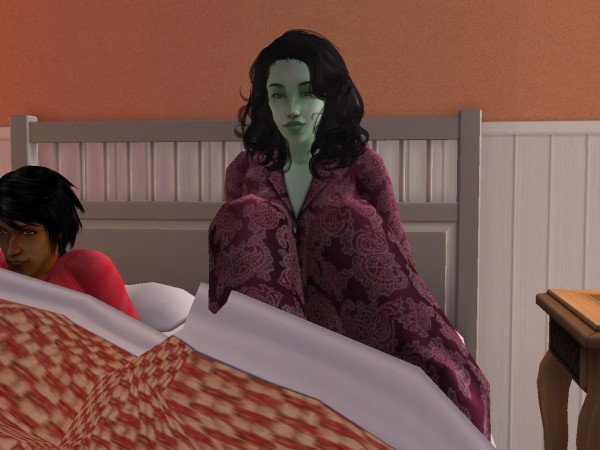 Mia woke up with food poisoning on the first day of Winter. Since it was forever ago since I last played this family before this, I don’t remember her eating anything weird. This does mess with my plans of a busy day at the business, though!

Then I remembered her boyfriend Tyler is a Family Sim, so he made her some Comfort Soup. 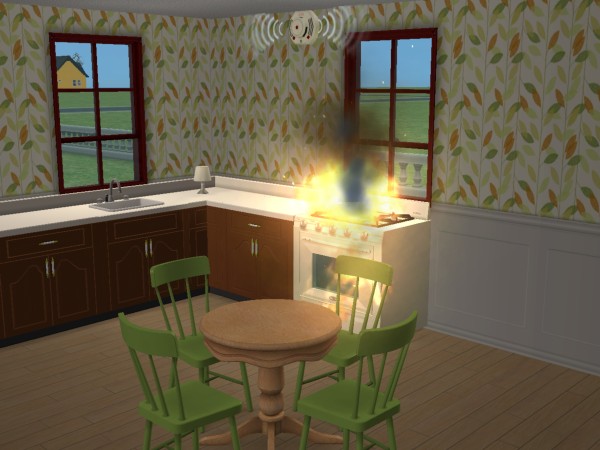 …Which caused a fire. Great start, guys. This is the third fire on the island, though, which means another position in Law Enforcement is unlocked. 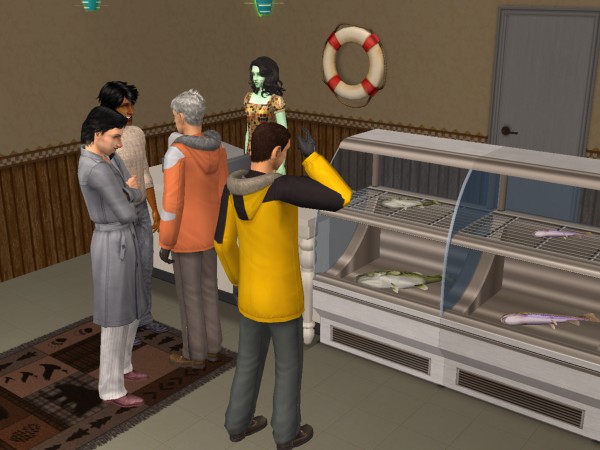 The second time was a charm, though, and a cured Mia and Tyler went over to Under The Sea Fish Market to open it up for the first time. They sold all of the fresh fish Mia had caught on her quest to get a gold Fishing badge. She did that to be able to get in her LTW career of Oceanography – she hadn’t found a position yet. 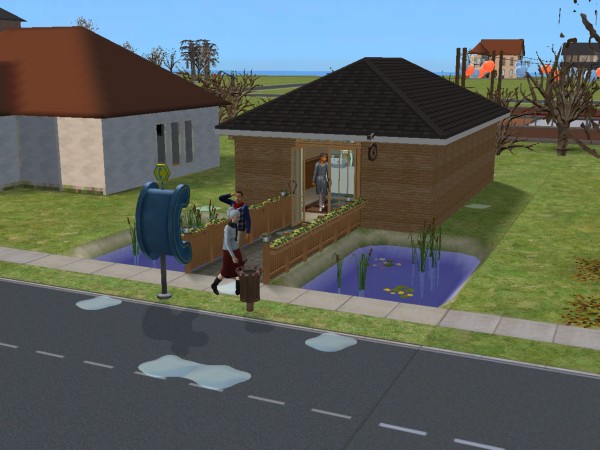 They got the store up to level 3 and then went home again. The aim is for them to earn enough to buy their own home. Tyler wants to see 3 children graduate from college, so I’d like them to settle down in their own house ASAP.

Tyler and Matt both had to work that afternoon, and Mia spent her time fishing up new stock for the store. Amazing just how many fish there are in the small garden pond, lol.

Matt came home with a promotion to Desk Sergeant (level 4).

Mia and Tyler went back to the Fish Market the next day. Just before they sold out pretty much all of the fish Mia had ever caught, they reached level 5, and thus got the last money perk. 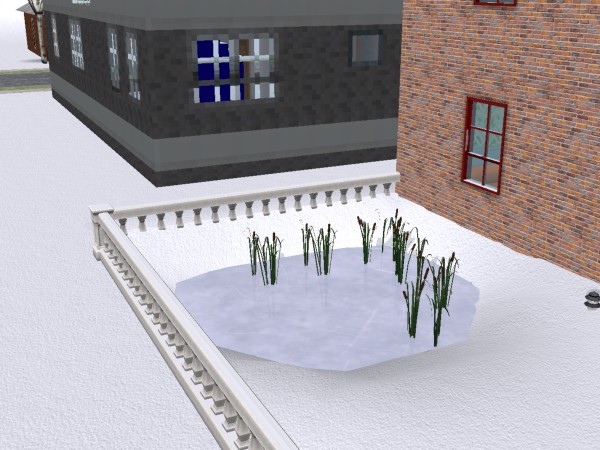 By the time they got home, the pond had frozen over, so that’s it for the Fish Market for now. Which is fine because they’ve earned more than enough money to buy a house.

Tyler got fired from his job as Battle of the Bands Jury due to a bad chance card… Oh well. The job didn’t really seem to fit him anyway. 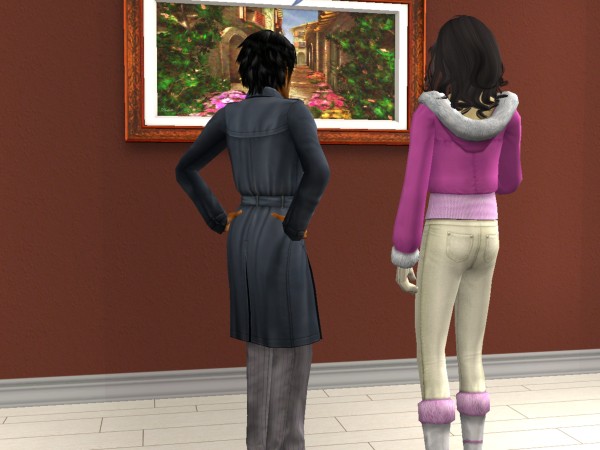 To cheer Tyler up, Mia took him on a date to the museum. I forgot there was still a ticket machine there, though, so they’re paying $30 an hour per Sim. That’s an expensive museum! 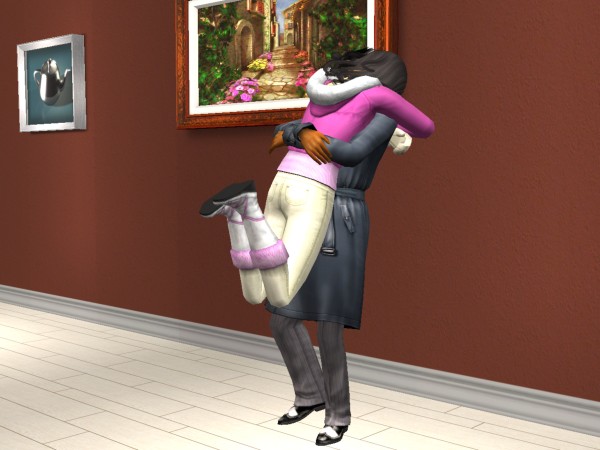 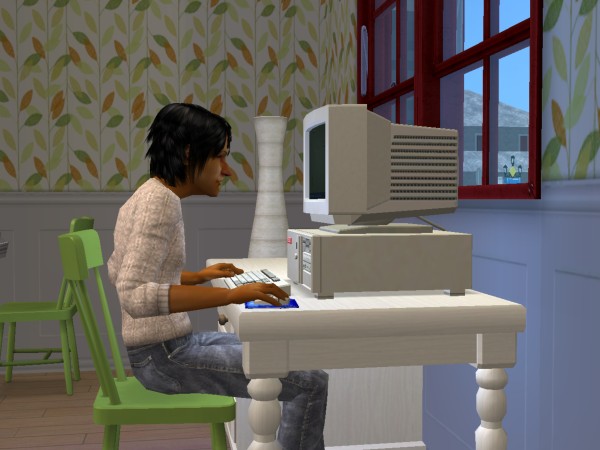 Tyler took on a job as Brick Layer in the Architecture career. It didn’t pay that much, but it fitted him much better and he was excited to advance through the ranks. 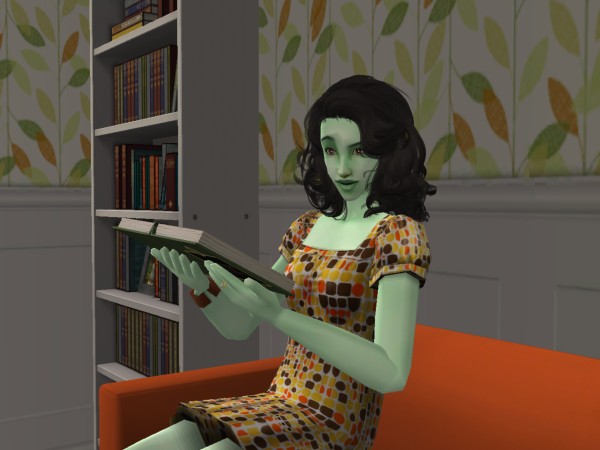 Tyler went to work straight away, and Mia spent the afternoon skilling for her future Oceanography career. 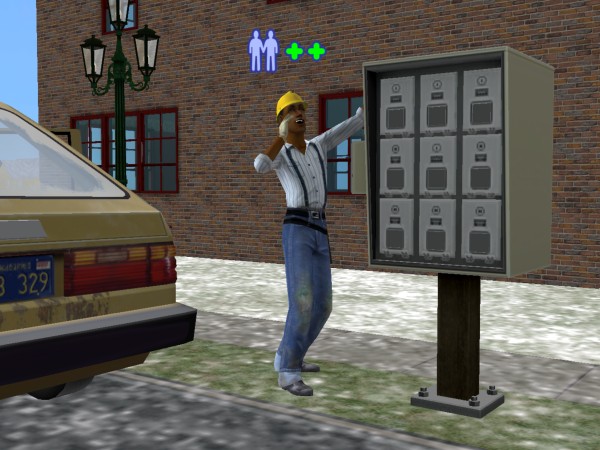 The bosses were so impressed with Tyler’s performance that they promoted him to Foreman right away. 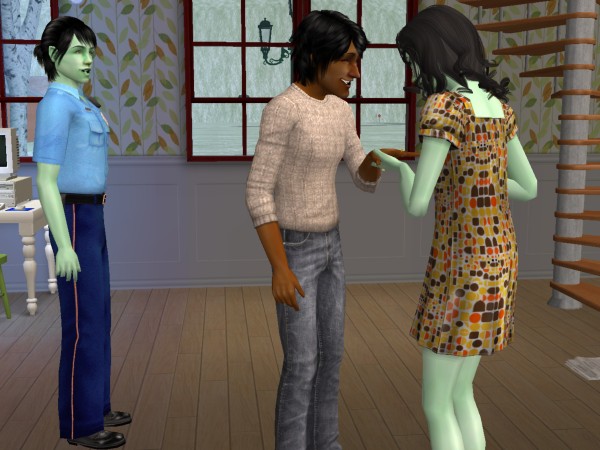 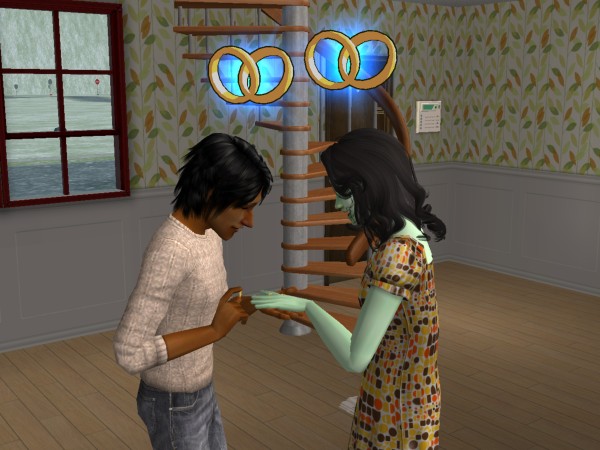 That afternoon, Mia and Tyler got married in a simple ceremony at home, with Matt as a witness.

They both rolled the want to go on holiday right after getting married, so they took the first plane out to Twikkii Island. 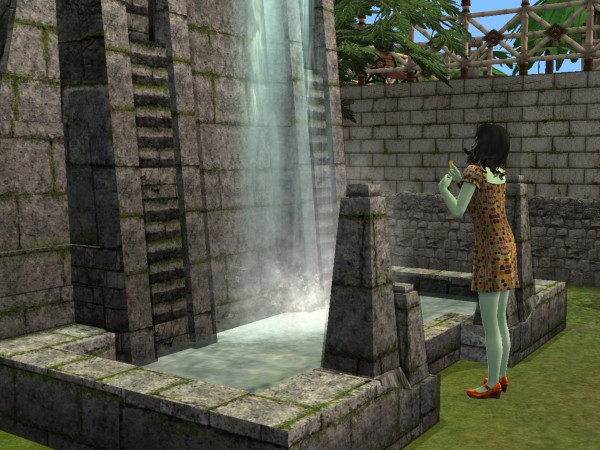 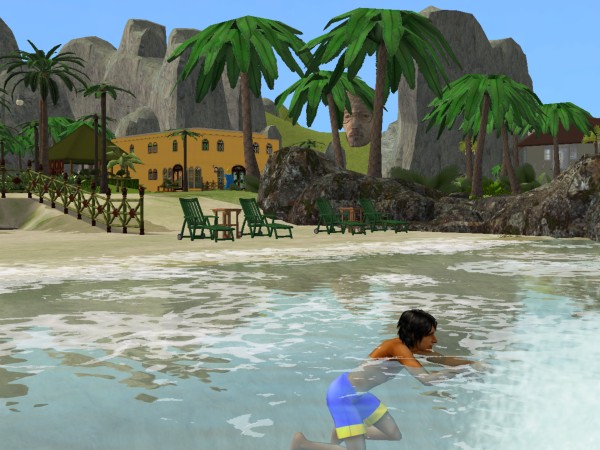 They had a marvellous time.

Back home, they got right back into the swing of things. Mia and Tyler were moving to their own new home, and Matt was moving to a new apartment as well – this one was much too big and expensive for him on his own. 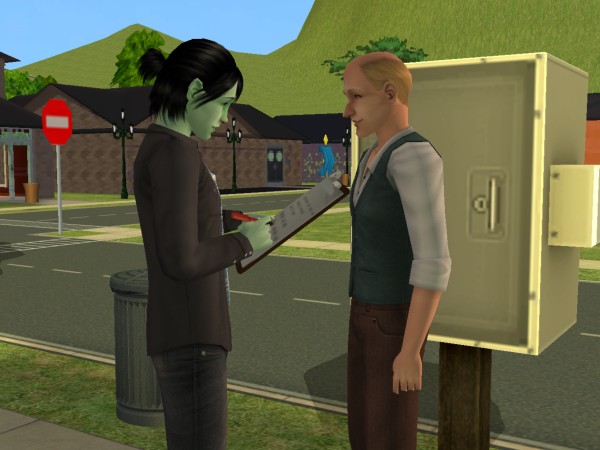 Matt moved into an apartment in the building next door. He was going to miss his sister and Tyler, but he also thought it was quite exciting to live on his own for the very first time in his life.

It was small, but it was his. And he had a spare bedroom, which was nice.

Matt got promoted to the Vice Squad (level 5) that day!

That evening, Matt invited Komei Tellerman over. They’re only acquaintances, but Komei is also the only male Sim Matt has had any kind of chemistry with (Matt is gay). I’m usually not a huge fan of Komei, but let’s see if this goes somewhere! They had 2 bolts before, but now I only see one… Why?! 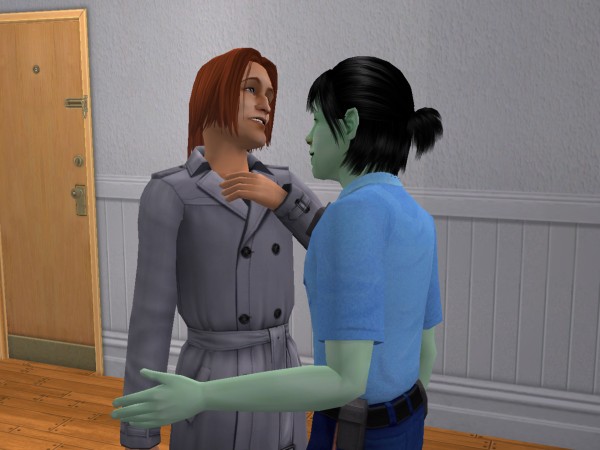 They got along together splendidly! 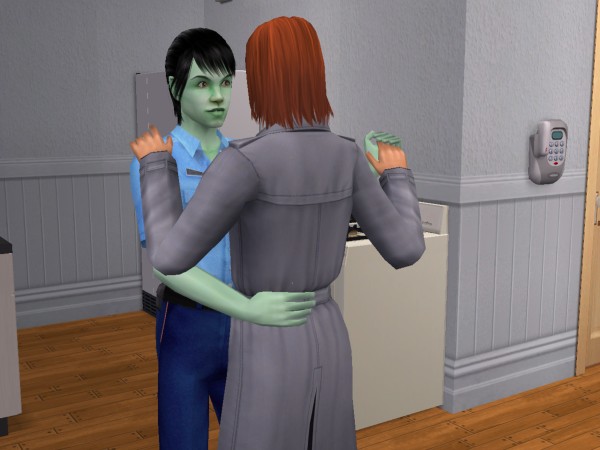 They went on a date and got crushes (because of a slow dance), but the only slightly romantic want Matt rolled was “dance together”.

But then I stopped paying attention for just a second and ACR happened! 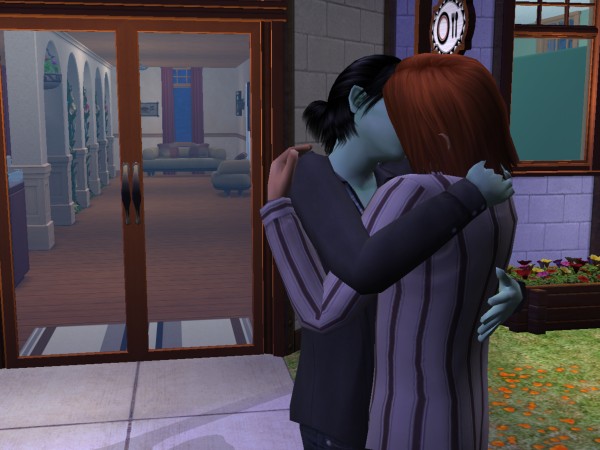 After that bout of, ehm, exercise, they were hungry, so they went over to Walker’s even though it was past midnight (basically it was me trying to get Matt to reroll his wants – it worked). Before they even got inside, they were all over each other. They’re rolling wants alright! They had a dream date and I think I quite like them together, so I’m excited to see where this goes!

Matt had the last day of the season off, and he spent most of it skilling. I was mostly waiting for him to roll Komei-related wants. The only one he has is “become BFFs with Komei”. All of his other wants are friend-related to. Stupid Popularity Sims. 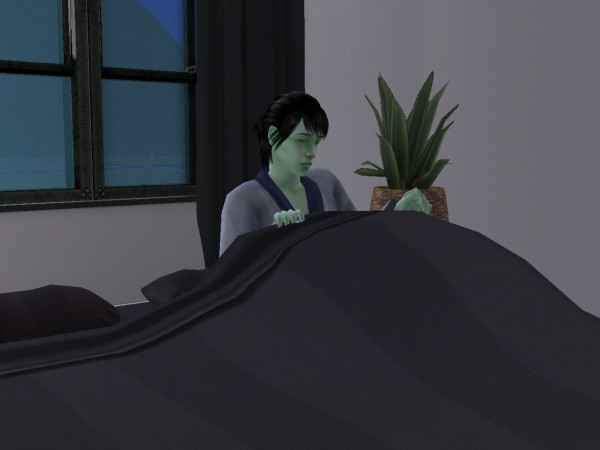 I guess we’ll see what happens next time! We’ll be seeing Mia and Tyler and their new home later on in this rotation again.