I’m back again with another Blueberry Island update, and this time we’re starting a new rotation! Winter 3 is upon us, which means we’ll first be visiting the Robinson family, of course.

Last time, Meadow gave birth to little baby boy Isaac, who later grew up into a toddler. She also became pregnant again! Owen found a job in his LTW career of Law Enforcement, and got to the level of Lieutenant through promotions. Ben retired from his job as a Business Tycoon to spend more time with his family, which he thoroughly enjoyed. Owen and Julia also spent some time at Owen’s business, where he sells fresh produce. 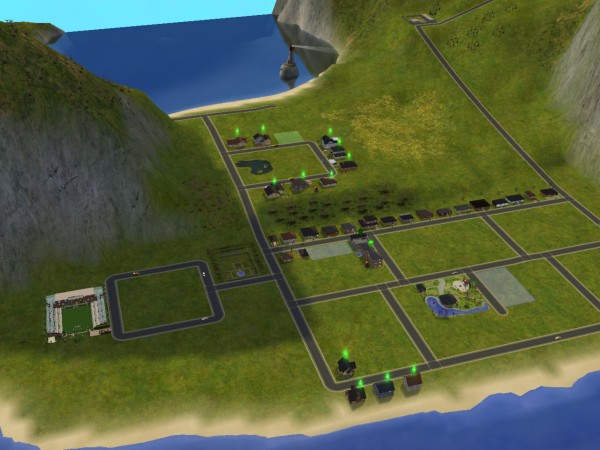 Since this is the start of a new season, let’s have an overview of Blueberry Island. It doesn’t really look as if much has changed, except for a few extra houses and businesses, but we actually accomplished quite a bit since last time. The population has grown from 430 to 1274, and we’ve earned a university and two new business districts! Hopefully this season will bring even more growth. I’d love to fill up this ‘hood some more as well.

First things first, though – let’s see how the Robinsons are doing!

Winter started off with a Sunday, and they all had a quiet morning. Julia spent some time with Lemon, who is meant to age up to an elder that day. I was thinking about letting her eat some of that magic kibble, so they could start breeding dogs, but I decided against it. 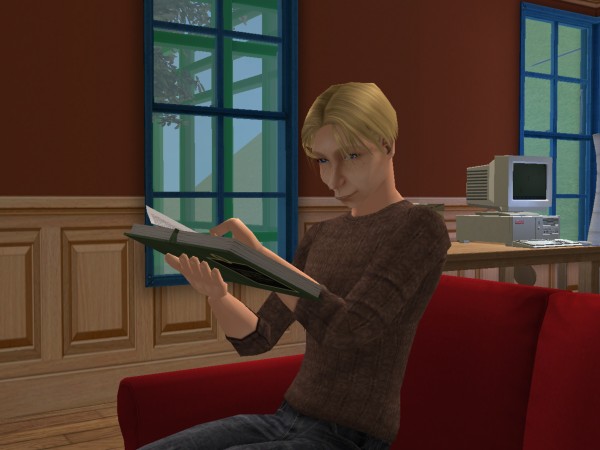 Owen did some skilling for his next promotion. 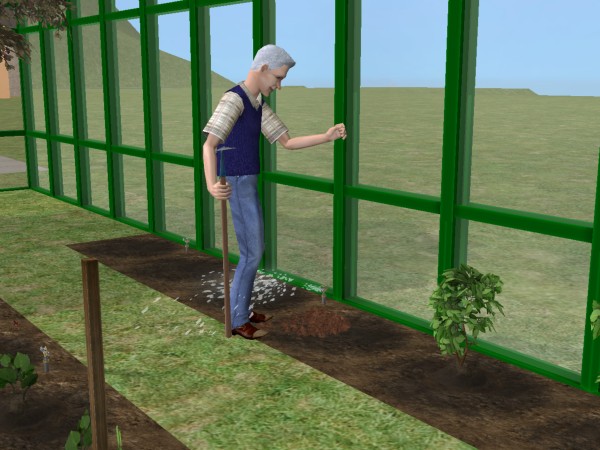 He was happy his father was able to help him out more in the garden now that Ben had retired. 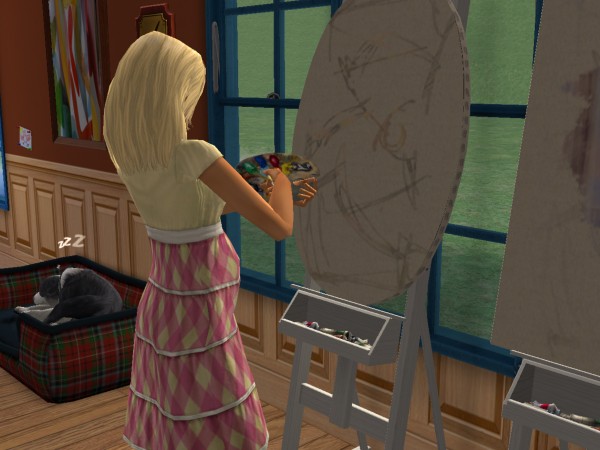 Meadow took it easy. Her pregnancy was going very well! 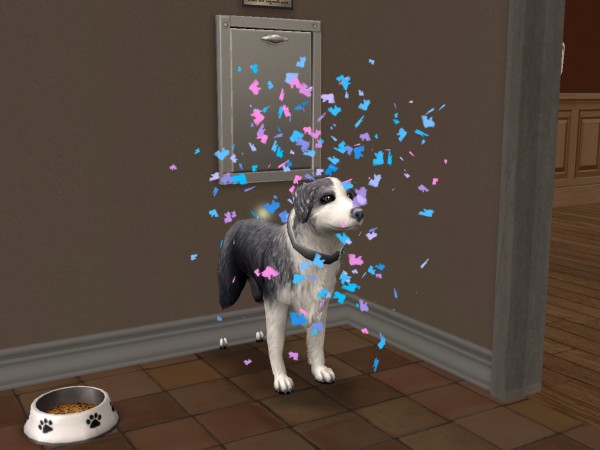 Lemon grew up to an elderly dog! And got partly stuck in the wall. You win some, you lose some.

Isaac still loved her very much. 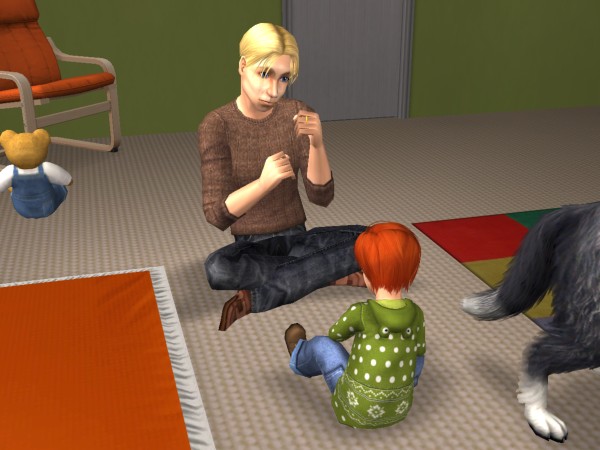 Owen was glad he could spend some time with his son on his day off.

Eric came by for an unexpected but of course very welcome visit.

He and Owen played some kicky bag like they used to when they were still teenagers.

That evening it was Isaac’s birthday. Of course, Eric stayed over for the event. 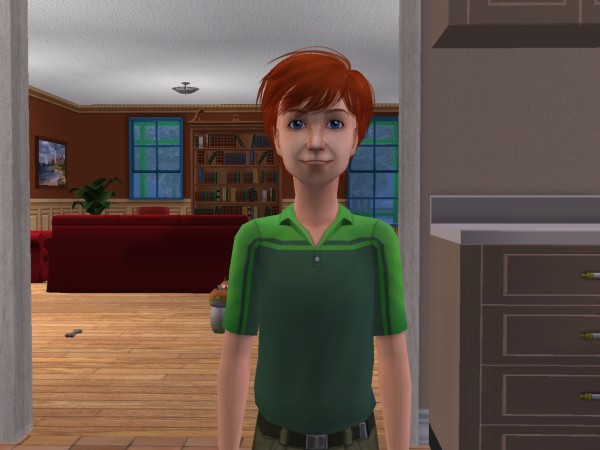 He’s quite cute! He does have some very thin lips, though. He looks a lot like his dad! 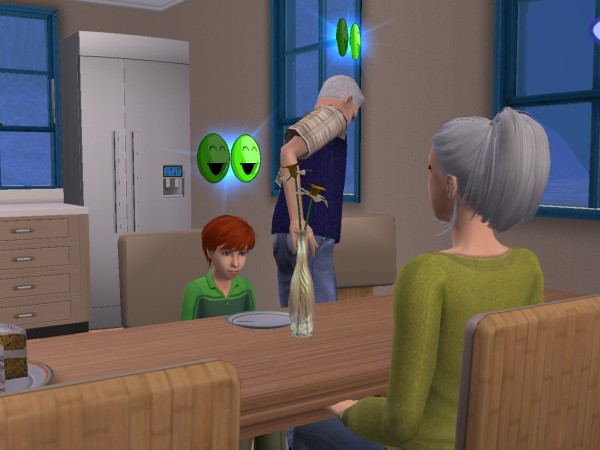 Isaac and Ben became best friends over a slice of birthday cake.

Isaac went to sleep in his new bedroom – which used to be his father’s. 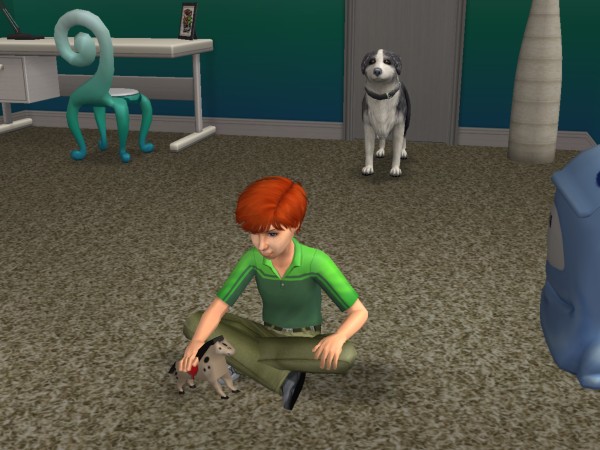 They had a fun afternoon playing together and became friends.

Owen helped Isaac with his homework later that day.

Meadow went into labour while Owen was doing yoga to earn body skill points. “Hold on, honey, let me finish this pose.” 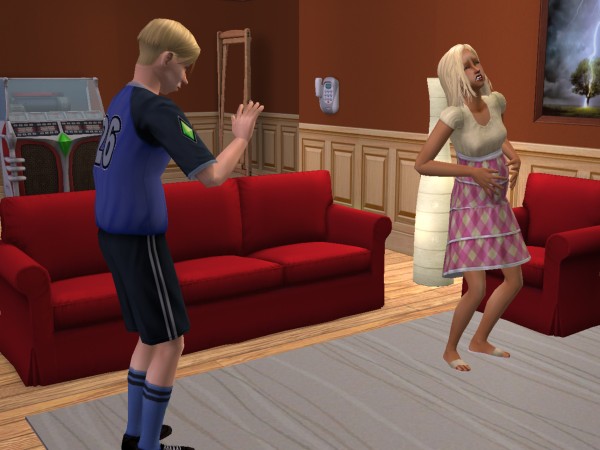 It’s a baby boy! His name is Patrick. With red hair (from Julia), light blue eyes (from Ben) and I think skin 3 (from Meadow). 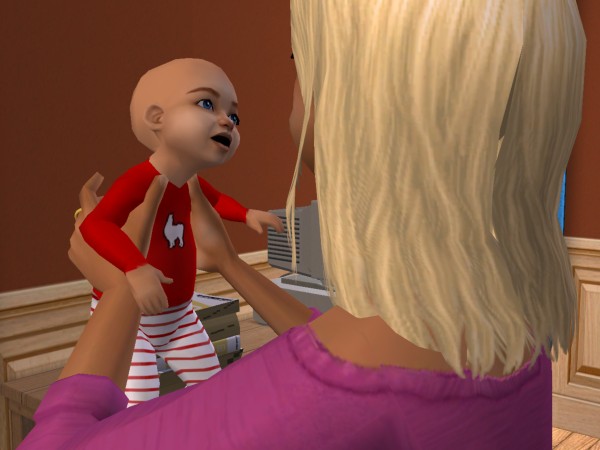 Holy crap, triplets! Just while I was considering taking out that hack (which I think I will do now lol). I guess it’s good for the population, though. 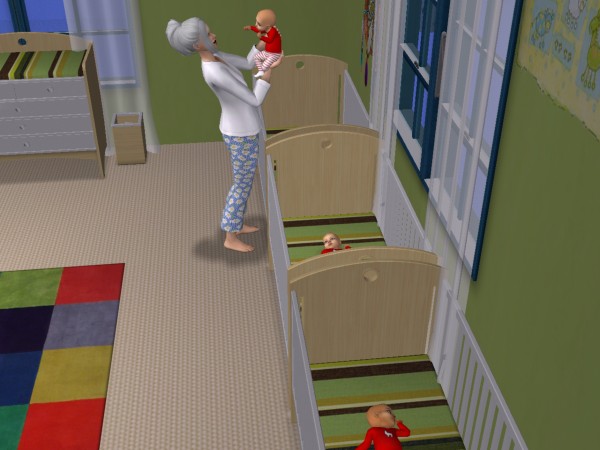 Julia was a bit in shock, but also very happy with the new additions to the family.

The next day was a Snow Day, which Isaac was very happy with. He liked school, but he also liked playing with Lemon, and he wanted to spend time with his new siblings! 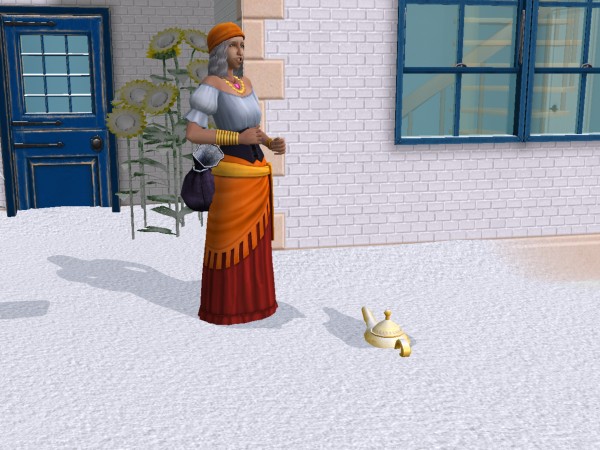 Wow, the gypsy dropped off a magic lamp! That hasn’t happened in my game in ages. I was almost thinking something was wrong.

Isaac played catch with his grandmother in the garden. 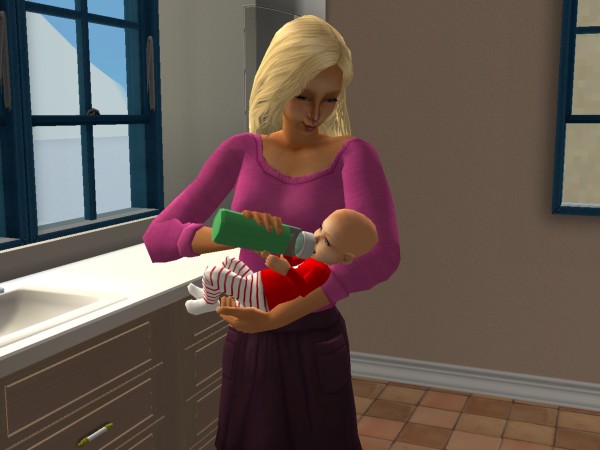 Meadow was very grateful for her parents-in-law, since taking care of three babies was a lot and Owen had to work as well.

She managed to max her Creativity skill when she had some time for herself, while Isaac worked on his Logic skill.

Sleeping in was officially a thing of the past for Owen and Meadow. 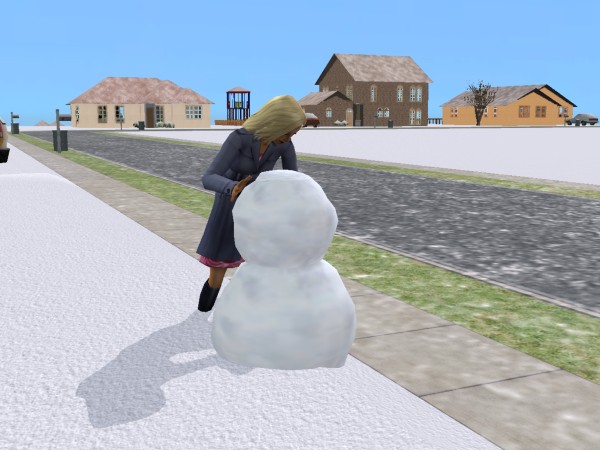 Meadow did find some time to do some autonomous snowman building. 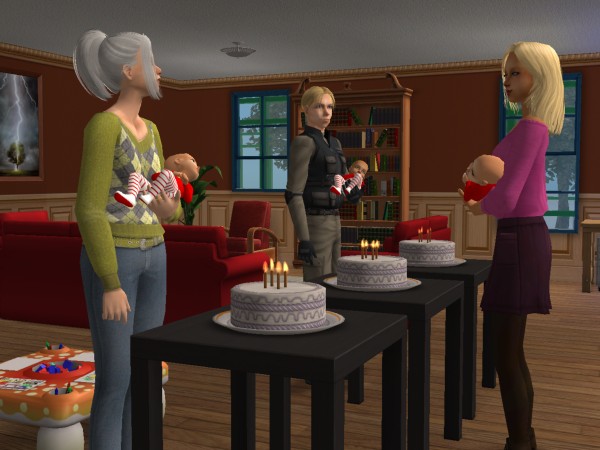 That evening was the triplets’ birthday! The family (i.e. I) decided not to throw a party, because things were hectic enough with three babies (about to be toddlers) as it was. 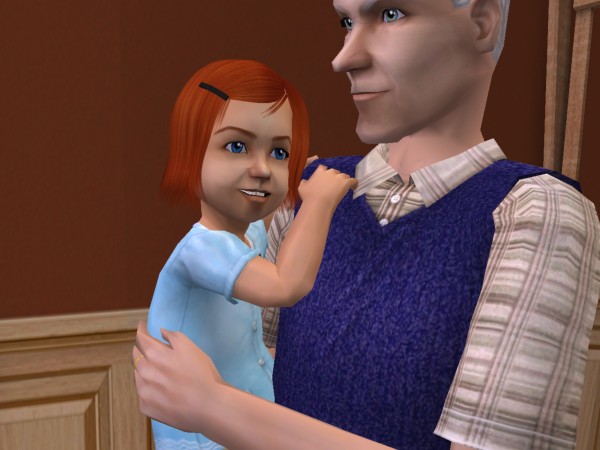 Here’s Emma after her little make over. She’s cute! Pretty sure she’s inherited Ben’s nose, though. She looks a lot like her older brother Isaac, but there’s no First Born Effect, so it’s just coincidence. Her personality is 3/4/10/7/5.

Here’s Stephen, who also has the Long nose (lol). And he’s got freckles! He’s also the only one of Owen and Meadow’s kids who’s inherited their blonde hair colour. His personality is 6/4/10/7/7. 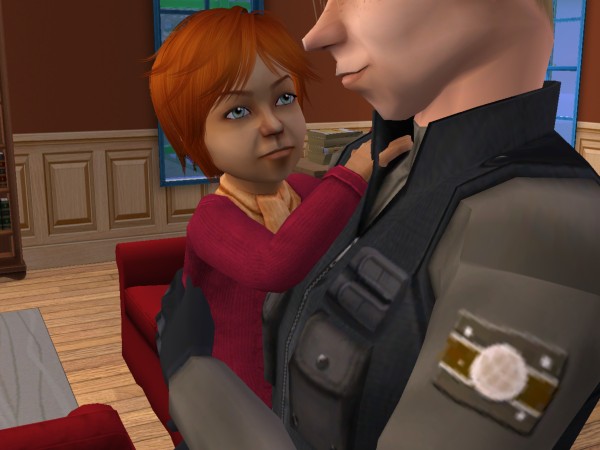 And then there’s Patrick! He grew up with the same hair style as his uncle Eric, but I kind of like it. He’s also the only one who’s got Meadow’s darker skin colour, and Ben’s light blue eyes. His personality is 3/7/8/7/4.

The little ones all got some Smart Milk straight away.

Due to all the festivities, Isaac almost forgot to do his homework.

The toddlers weren’t very good at entertaining themselves or each other – they kept whining at the bottom of the stairs that they couldn’t reach their parents until I directed them to do something else.

Taking care of three toddlers was very hectic, but Meadow made sure to spend time with Isaac as well, who had another snow day.

The triplets were getting better at autonomously entertaining themselves. 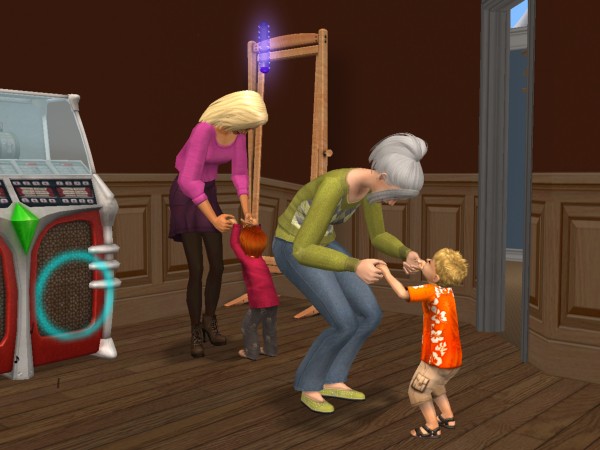 They also had a couple of skills to learn, though.

I missed the pop up thingy, but Isaac became best friends with his cousin Erin over the phone, fulfilling a want he’d had for a while. 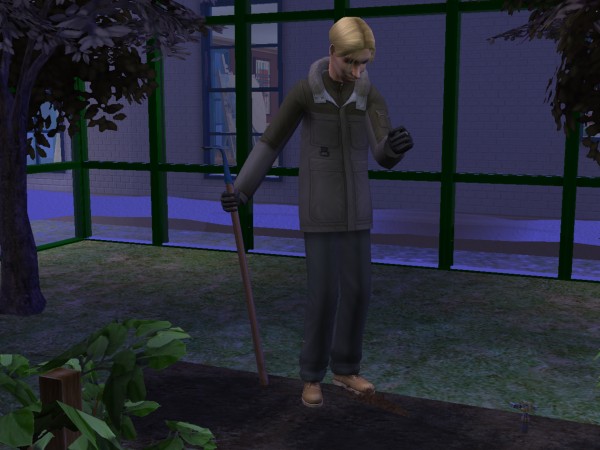 Interestingly, Owen, the Family Sim, isn’t rolling any wants related to his family. He only wants to do Nature things, or buy expensive stuff like cars or games “costing at least $3,000”.

We’ll have to see how that goes next season, though, because this is the end of Winter for the Robinson family! I didn’t manage to get around to playing Owen’s produce shop, but that’s what you get with triplets. Looking forward to the next season with this suddenly quite large family! Happy Simming!