Last time with this part of the Dawson family, Henry and Sarah got married and due to a pretty big misunderstanding, Sarah took in a foster child without Henry knowing. Caryl joined the family and to Sarah’s disappointment she bonded with Henry immediately, but not with Sarah. Henry also had to come back out of retirement and find a job in order for them to be able to pay the bills and rent. Towards the end of the season things got much better, though, and everyone was more or less happy.

Caryl didn’t really like sleeping in the same room as her foster parents, but she was grateful they had taken her in in the first place, so she didn’t complain.

Henry paid the taxes worth 200 dollars. Not much compared to other families, but quite a sum of money for them. 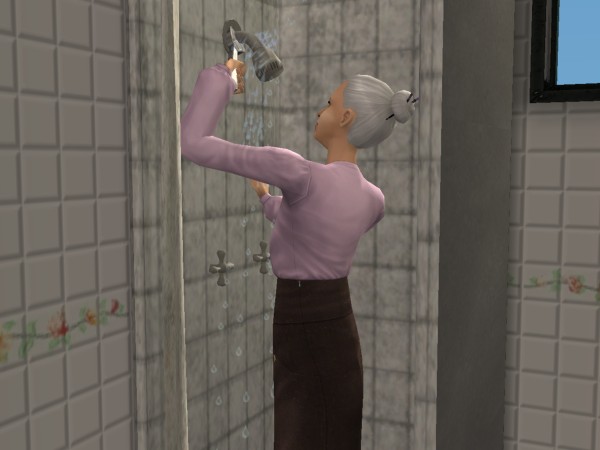 Caryl and Henry went to school and work, and Sarah was once again alone in the apartment. She fixed the shower, and did some more chores around the house. 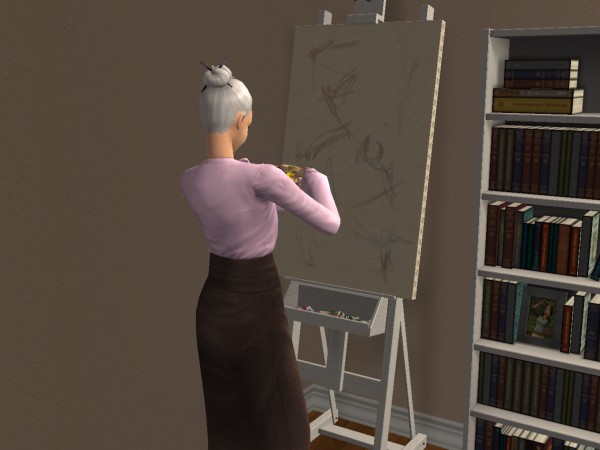 After the bathroom was fully functioning and clean again, she painted for a while.

I want her to make flower bouquets (she’s got a gold badge) but as long as they don’t have a business they can sell them in yet, they cost more money than they make. I could sell them out of her inventory, but I don’t really want to do that.

Caryl came back with $100 for some reason (proud relatives or something), which stayed in the household funds since she will inherit everything quite soon anyway.

Sarah was very happy when Caryl asked her to play Red Hands with her.

Caryl did interrupt the game to run to Henry when he came home, though. 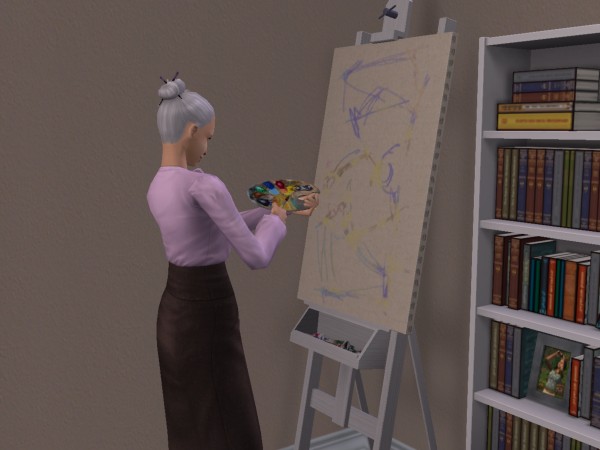 At this point I struggled to think of a way for this family to earn enough money to buy a community lot. There was the option of a loan, but I didn’t like that because where would that money come from? I can’t take it out of the uni fund, because that’s for the university, obviously.

For now, I guess Sarah will just have to help paying the bills with her paintings. And maybe she’ll start making and selling the flowers. Might make a nice profit on snapdragons.

And in all fairness, the family was doing quite well. Sarah and Henry were happy again, and loved Caryl very much, and vice versa. 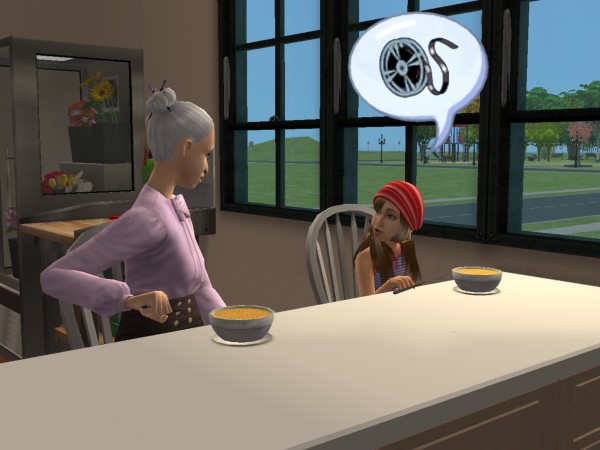 The next day was a Saturday, so they all took it easy. Caryl told Sarah about all the things she did at school that week.

“And then on Friday we watched a film about ants! It was really cool! Did you know they can carry up to 50 times the weight of their own body?”

Caryl spent the rest of the day skilling. Henry and Sarah encouraged her to learn as much as she could, so she could find a good job when she grows up. 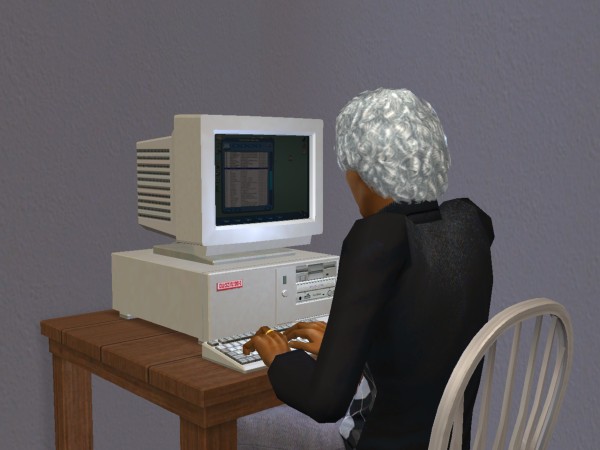 That afternoon, despite their previous worries, Henry and Sarah bought a community lot named Magnolia Market. They’d set up a small outdoor market, and earn their money back in no time. At least, that was the idea.

Henry asked Rachel Walker, one of his neighbours, if she could watch Caryl for a while, while he and Sarah went to the community lot.

This is what they started with. This is also the 15th owned community lot, which means +1 for the SM. Although I now realise that it says “for every 5 community lots”, with nothing about them having to be owned. Need to remember that!

For other BaCC-ers out there: how do you count this? Just owned or also NPC lots?

Meadow was the very first customer.

It started raining, so I added a little awning. Now they only had $55 left in the back. They better start earning stars soon so they can get the money perks.

They did their best, and got the store to level 3, earning quite a few badges on the way. They also earned enough money to build an actual little shop, with room in front to put flowers and plants as well.

Then they went back home to Caryl and Henry played chess with her for a while. 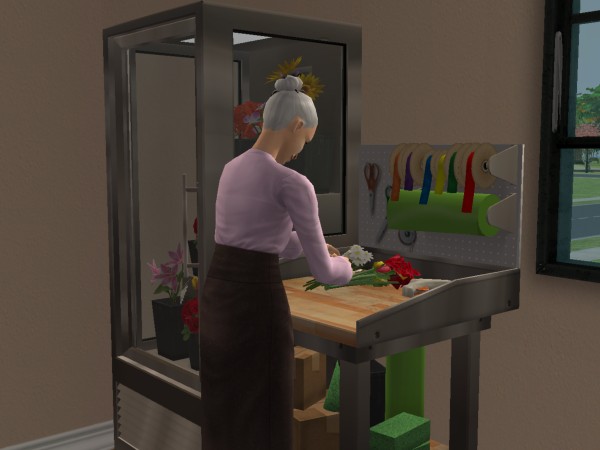 Sarah went to work on some Tulip Bouquets. The plan is to let Caryl work on her badge as soon as she becomes a teen– especially because Sarah’s age bar is filling up very fast…

Henry had to work the next morning, so Sarah and Caryl had breakfast together.

Then, Caryl went back to chess and Sarah gave financial advice for money on the internet. I forgot about her being a Fortune Sim and being able to do this!

Caryl chatted on the phone with Jacob, who’s technically her nephew, but I’m going with cousin.

Sarah spent her afternoon making snapdragons, so we’ve got a few before she dies.

Henry got promoted to Field Sales Representative! I installed a hack that ensures elder Sims can also find normal jobs and don’t have to work those crappy teen jobs that hardly pay anything.

Henry immediately went to work on his creativity skill for his next promotion.

They had a nice mac ‘n’ cheese family meal together.

The next day Henry went to work, and Caryl had her last day of school as a child! Today was her birthday and she (and I) was very excited about it.

Sarah did more flower arranging, and this time she had the help of a very handy snapdragon of her own creation.

She also paid the rent, at the exact same moment as the rest of the tenants, apparently.

She chatted with Caroline Walker for a while. Sarah liked living in an apartment building – there were always lots of people around to have a little chat with. 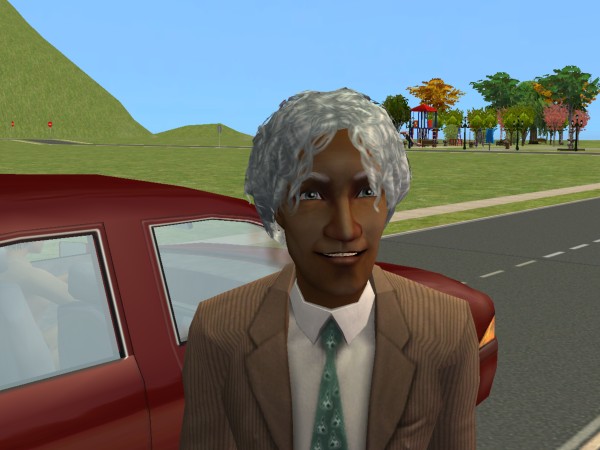 Henry came home with another promotion – he’s now a Junior Executive. I love this hack! I always thought it’s so weird that elders can’t find a good job…

That afternoon at 6, it was time for Caryl to grow up! And for some weird reason Hannah Walker was there as well.

“Wow, nice! And these clothes aren’t horrible! A bit plain, but not horrible.” 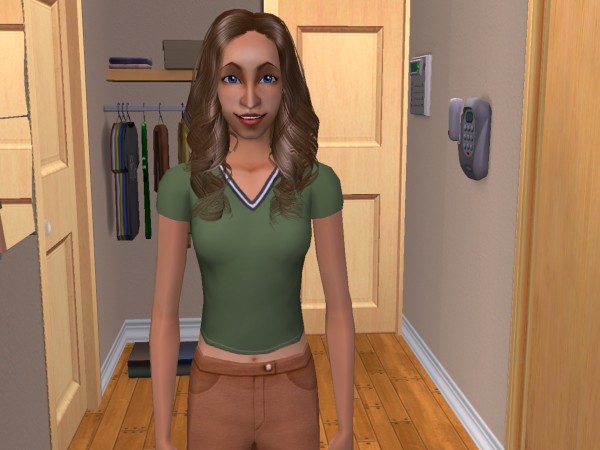 She decided to ditch the hat, and add a little make up, and here she is! She looks cute, I think, despite her somewhat harsh features.

Caryl is a Pleasure/Knowledge Sim with the LTW to become a Mad Scientist, and she’s straight (I think I should customize the chances of bi-ness and gayness, because there’s WAY too many straight Sims on the Island as compared to other sexualities). 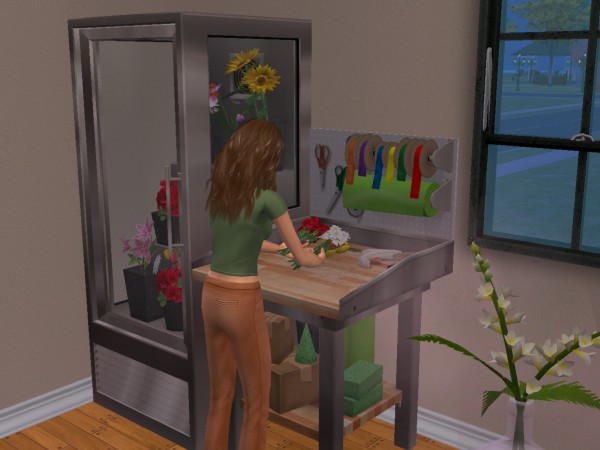 I immediately had her start working on her Flower Arranging Skill. 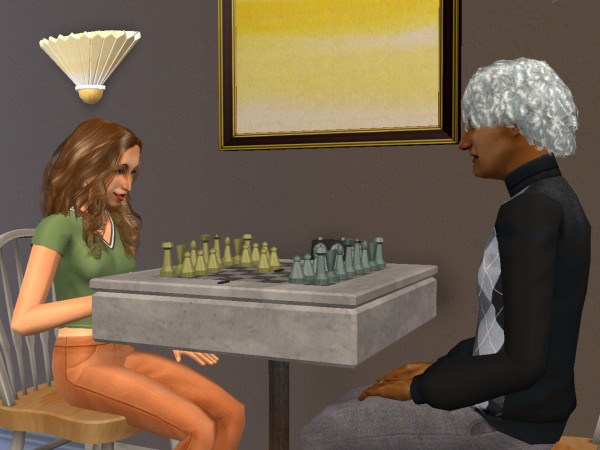 Before work and school the next day, Henry and Caryl had an early morning game of chess. They both needed Logic points, and they loved to play chess together. 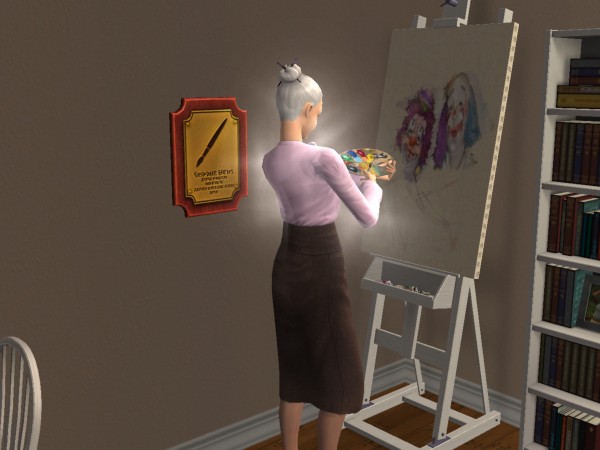 Sarah spent her morning painting, since she really wanted to earn her eighth Creativity skill point and her aspiration bar was rather low.

After school, Caryl joined Sarah in the living room to do her homework. 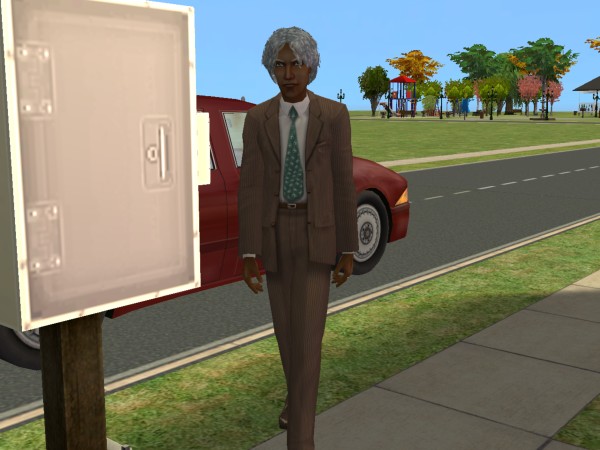 Henry came home with yet another promotion, this time to Executive.

He then started to write a children’s book, since he needed creativity, but Sarah was using the easel.

Caryl spent the rest of the day working on her flower arranging skill. Selling snapdragons is going to be a useful business! There are plenty of other residents who would like one of those, I think. 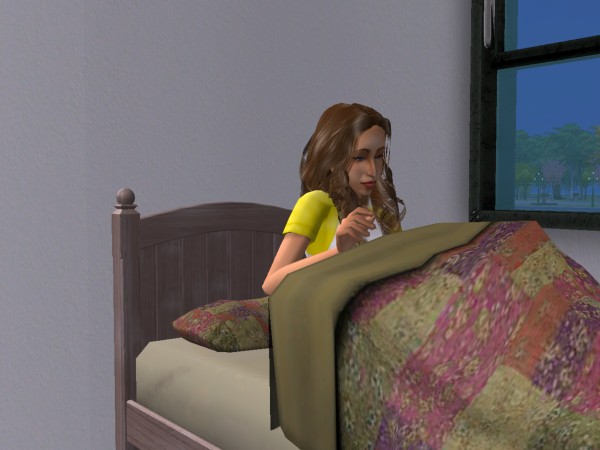 Everyone went to bed feeling happy. It’d been a good season for the family! We’re going to have to do something about those sleeping arrangements next season now that Caryl is a teen, though. Perhaps it’s time they move to another apartment. We’ll see!

I hope you liked this update, and Happy Simming!