It’s been ages since the last Blueberry Island update, but it’s back! Last time we visited the Burke family, Angie gave birth to twin girls, Robin and Amber, who later grew up to toddlers. Angie also got her pet store up to level 7, and Amin got closer to his LTW of having 20 best friends. Madison became best friends with Zoe Harris, and those two became pretty much inseparable! Now, onto the update!

There’s Angie and Amin in the back (obviously), and sitting you have (from left to right) Amber, Mittens, Madison and Robin. 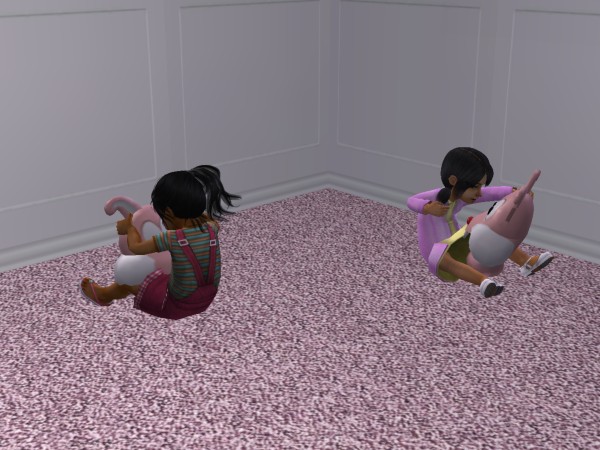 The twins are still adorable, and played a lot with their bunny heads.

Maddie spent her morning playing chess. She had the day off, as it was a Sunday. 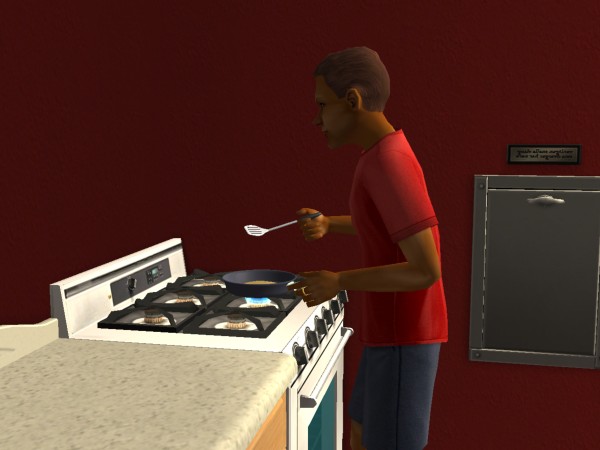 Amin slept in, but then made some nice pancakes for brunch.

The twins really did everything together.

That evening, it was Maddie’s birthday! 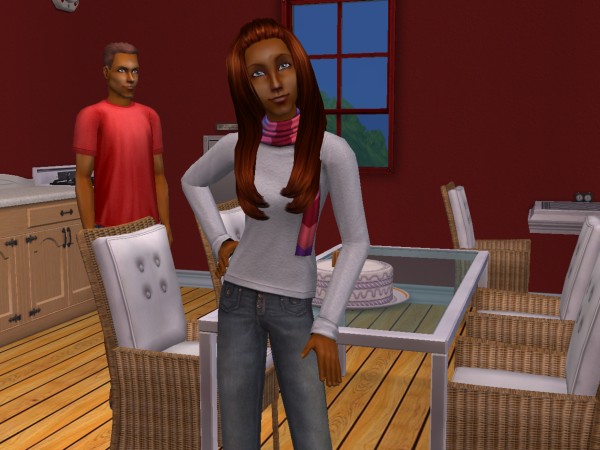 She’s a Romance/Knowledge Sim, and she wants to Woohoo with 20 different Sims! I’ve never actually accomplished that LTW before, so that’ll be fun.

She went to buy some new clothes at Bigfoot Fashion. 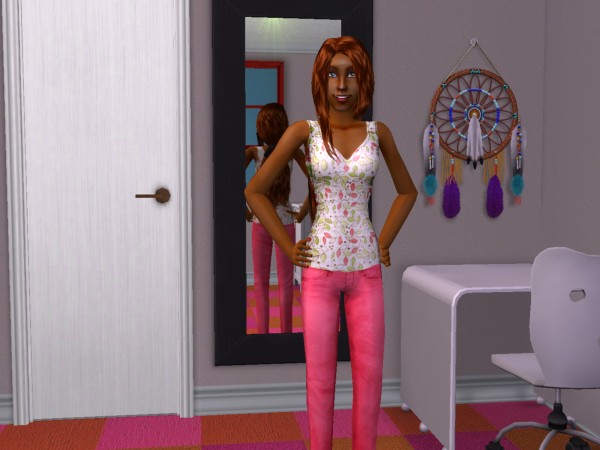 This is her new look! I’m going to need to change her room a little bit. though, because it’s a bit too pink right now together with that outfit.

Well, this is interesting. Dog food coming from the milk bottle…

Maddie’s room after its little make over. This suits her much better, I think.

Amin got promoted to Concert Pianist that evening.

Maddie spent some time playing with Robin the following morning before school. 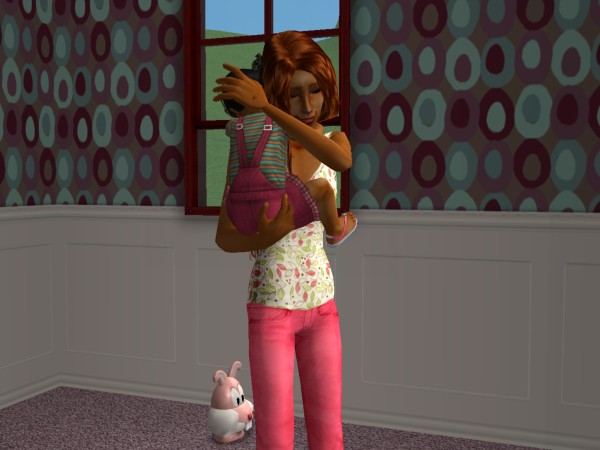 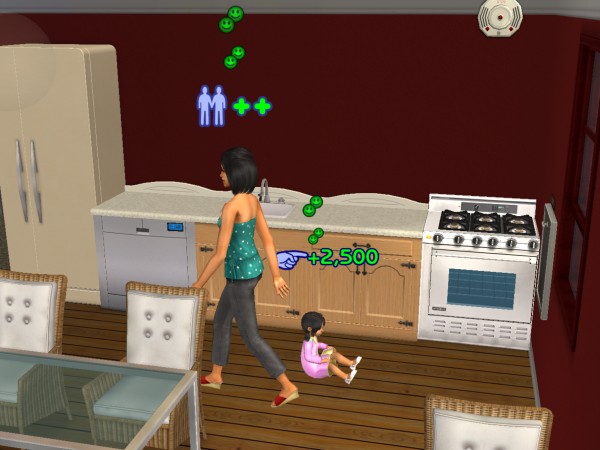 Angie taught Amber to walk, and they became best friends in the process.

While the girls were taking a nap, Angie played with Mittens. 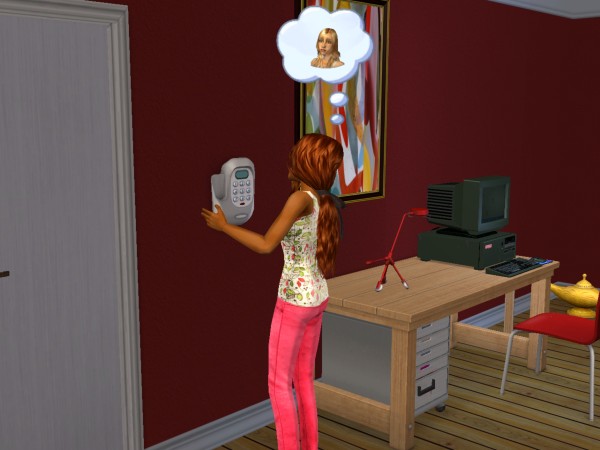 Zoe called just as Maddie got home. Those two really are inseparable! 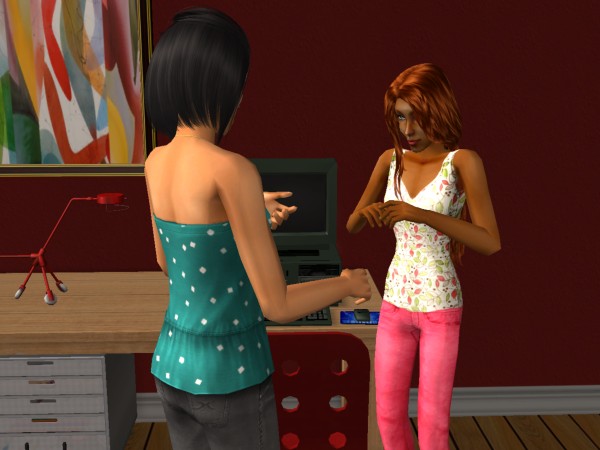 Maddie broke the computer, so Angie lectured her.

After doing her homework, she spent some time admiring herself in the mirror.

When Amin came home from work, he became best friends with his friend Vamsay over the phone.

That evening it was the twins’ birthday!

…and then it was Robin’s turn! 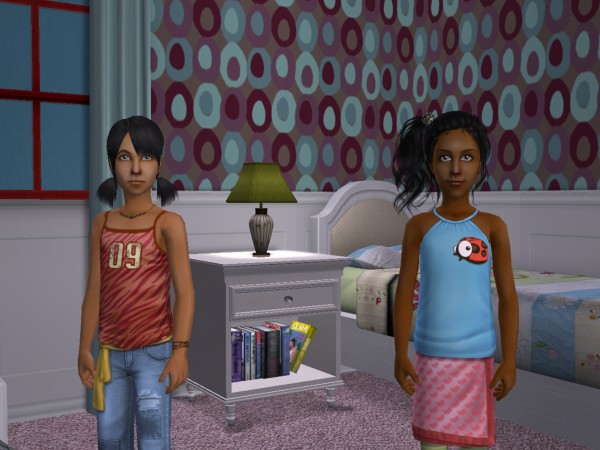 These are the girls as kids, in their newly made over bedroom! They’re cute! They seem to look mostly like their dad, just like Maddie.

Maddie maxed Logic that evening before going to bed!

“Do not talk to me about games!”

They got along fine after that though, and all the kids spent some time socialising with each other and Mittens before school. 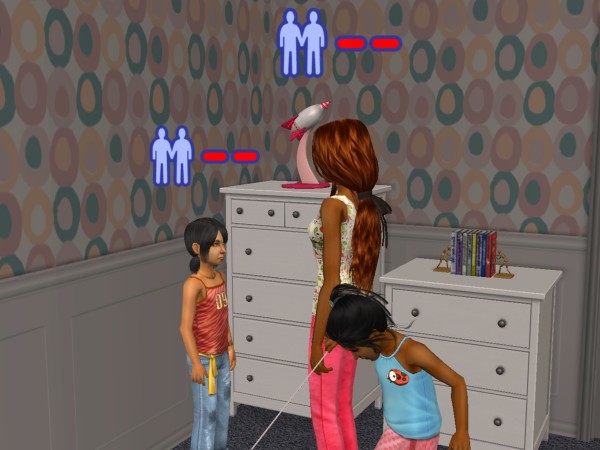 Maddie and Amber almost got in a fight at the end, but then the school bus arrived.

Amin invited over his friend Camryn Lee and became best friends with her.

When Maddie got home from school, Angie took her to the pet store to work for a while. 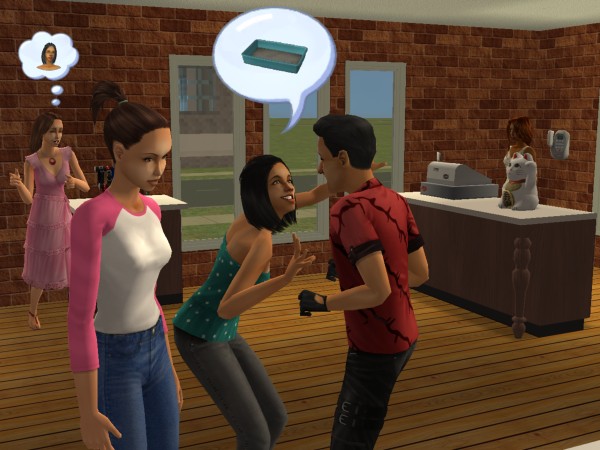 “This litter box is the best thing ever and you totally need it!”

Maddie tried her best with the cash register but found it to be quite stressful.

Together they got the store up to level 8, and Maddie earned her bronze cashier badge. 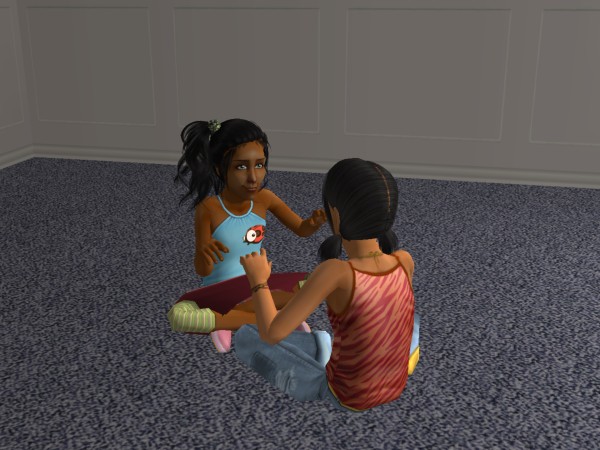 The twins had an exhausting first day of school, and didn’t have a lot of fun, unfortunately, so they spent some time playing together.

Maddie wanted to buy a source of green energy, so the family got 3 solar panels.

Amber and Madison played some catch before school.

Amin became best friends with Jan Tellerman over the phone.

He then had a nice late breakfast with Angie, who dropped some hints about Amin’s cooking abilities. “How about some eggs next time?” 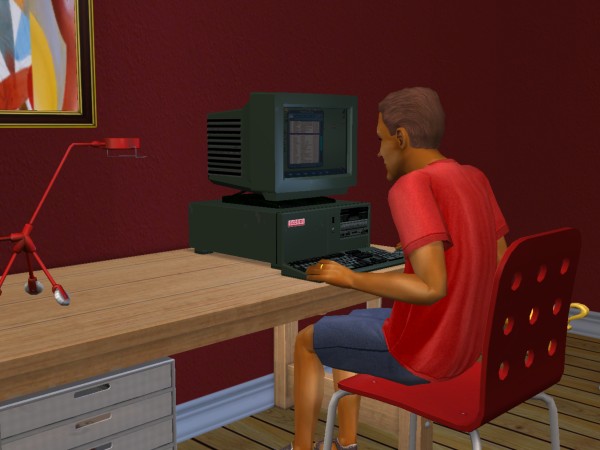 Amin transmitted $10,000 to both of the twins’ bank accounts.

Maddie was having lots of fun at high school but was too shy to ask anyone to come home with her, since she only has 1 outgoing point. 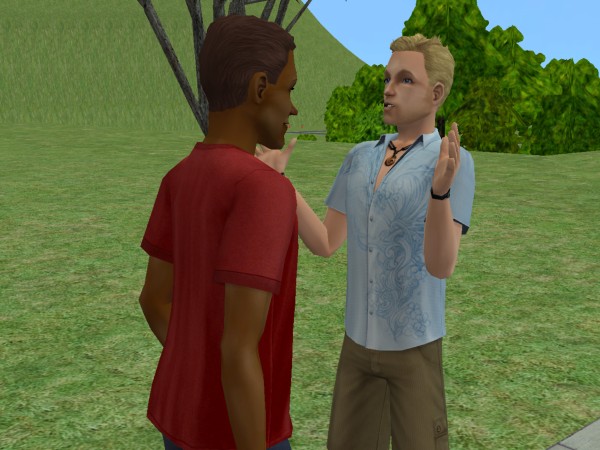 Nathan Gallagher walked by, so Amin greeted him and they became friends. 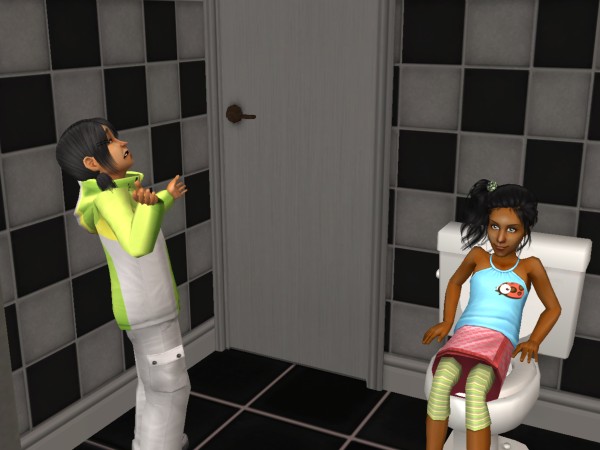 “Whyyy do you always go first? I have to pee!”

Maddie does not seem to have a lot of talent for cooking. She burned mac and cheese!

Everyone ate it anyway and pretended like nothing was wrong. Even Amber kept her mouth shut.

Later that night Angie and Amin both had a little late night snack as well though.

The twins played some Red Hands before school. 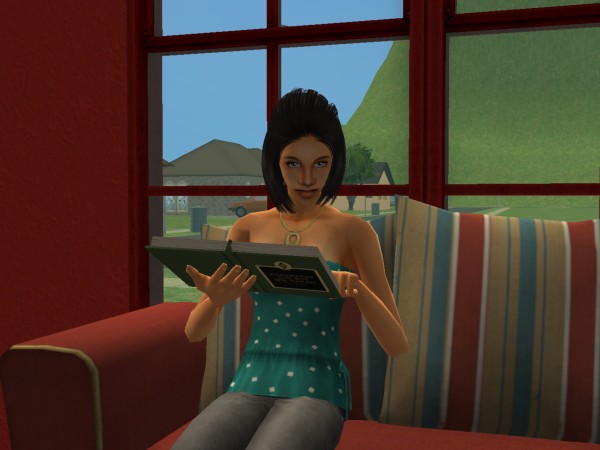 Angie did some skilling. I’m still thinking about whether or not I should let her become permaplat via the genie lamp since I can’t fulfil her LTW. Perhaps when she’s closer to her birthday. 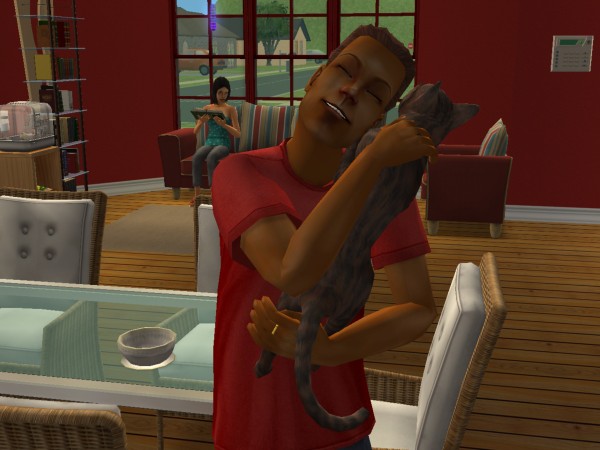 Amin cuddled with Mittens for a while.

Angie and Amin went to the pet shop and I expanded the store, since it was starting to feel a little crowded last time they worked there.

After running the shop for a while, Angie and Amin went on a date, while Julien Cooke was being a creep in the background. 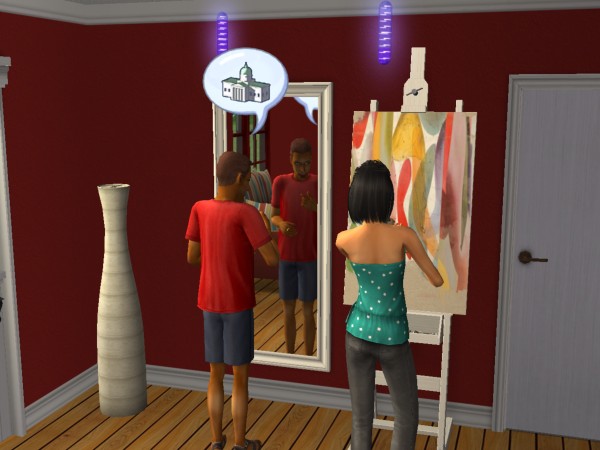 Back home they spent some time skilling together. 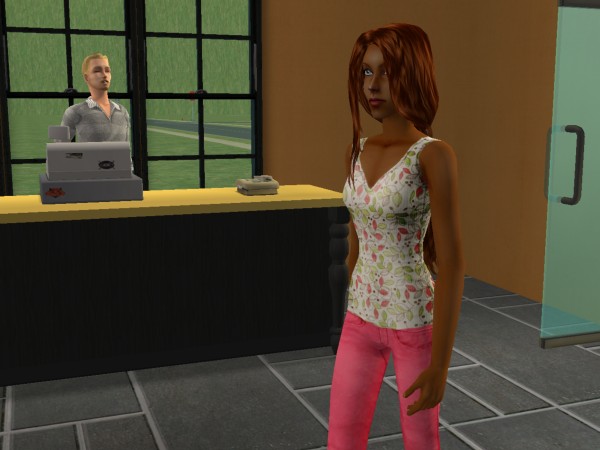 Maddie wanted to buy an MP3 player, so I sent her to James’ Electronics hoping maybe she’d run into a teenage boy there too.

She spent some time listening to music (and raising her fun) waiting for boys. 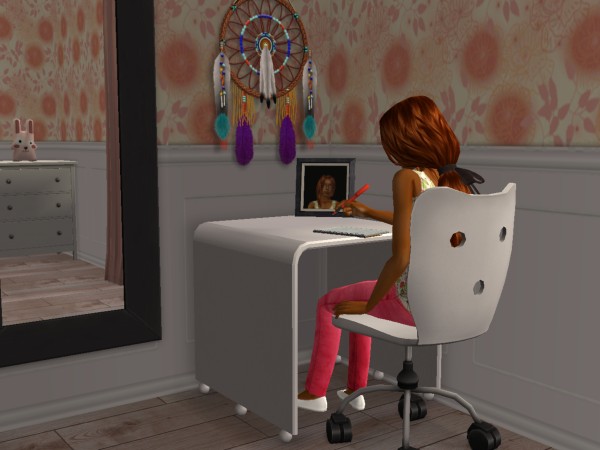 Unfortunately, no boys showed up at all, so she went home to do her homework.

After she finished her homework, Orlando Centowski walked by the house! He’s cute, but unfortunately they have negative attraction…

Robin brought home Thalia Harris (Zoe’s little sister). She played chess with Angie the whole time she was there though. Maybe she can become friends with Robin when I play her house, or perhaps next season.

The twins played some chess before bed.

And then the season was already over! I hope you enjoyed this update – thanks for reading and Happy Simming!