Hello everyone! I’m back already!

When we last visited the McHero family (like, yesterday), Emma was born and grew up to a child, Lena lifted the Music restriction, finally giving us seasons, and Lauren got pregnant again. At the end of the chapter she gave birth to twin boys, Eric and Ethan. Ethan has green eyes, which I realised came all the way from Mandy! The family also got a dog, Tucker, who will lift the Pet Security restriction. Oh, and Logan got abducted by aliens and came home with a little present…

It was a Saturday, and Lauren spent the morning teaching Emma how to do her homework.

In the afternoon, they played chess together. Taking care of the twins took up quite some time, but Lauren thought it was important to spend enough time with Emma as well.

Tucker got promoted to Contraband Sniffer! Unfortunately, he doesn’t have to go into work again for the next 3 days…

While I’ve decided to wait with building the new house until Athletic is lifted (and maybe even Criminal and Business too), I did build an extra wing to the tower so everyone can have their own bedroom in the future.

That evening it was already time for the twins’ birthday! 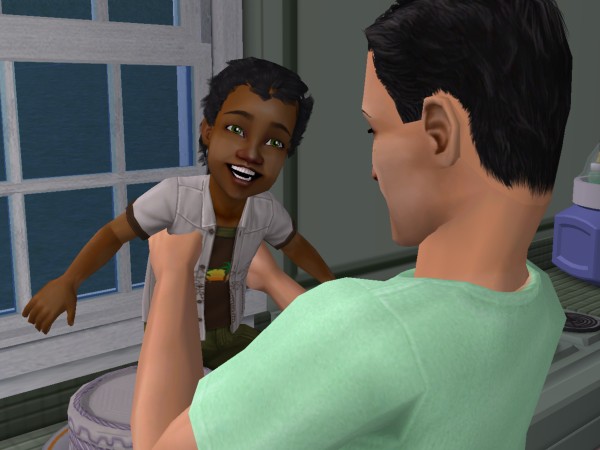 And this is Ethan, who is absolutely adorable as well. I’m still so stoked he’s got green eyes! His personality is 10/7/9/3/5. 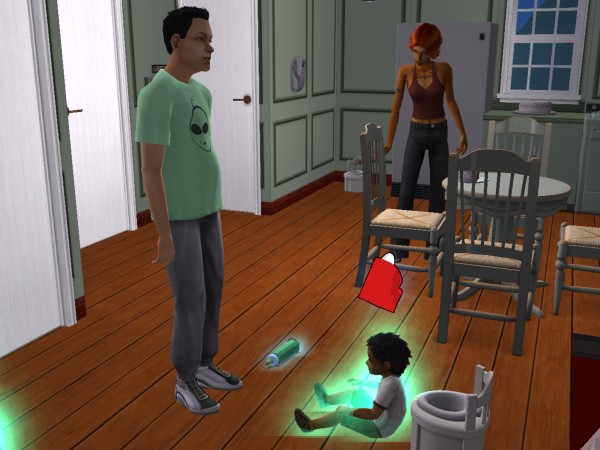 The boys both got some Smart Milk straight away (as per tradition) and the potty training commenced. Ethan needed to pee so bad that he got potty trained in one go!

I made a decision about Logan pregnancy… 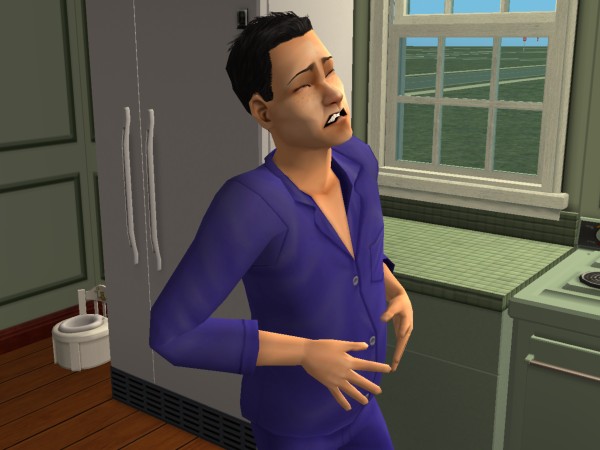 The next morning, he went into labour! 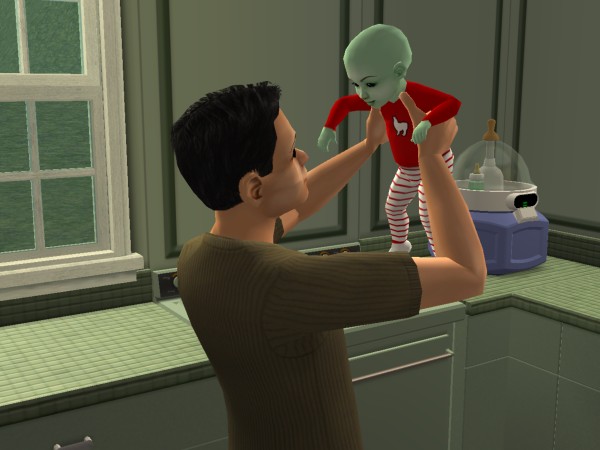 The cheesecake didn’t work, even though he had like 6 pieces. What’s more, it’s a boy, not a girl like I hoped. I’m already contemplating letting him get abducted again…

Lauren got started on the rest of the toddler training for the twins. 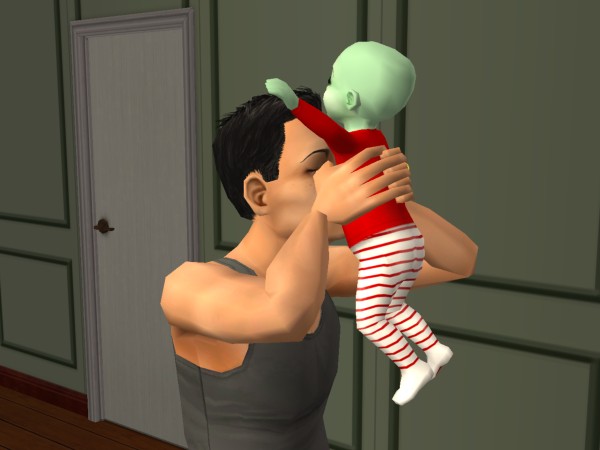 Logan was already completely in love with Evan. 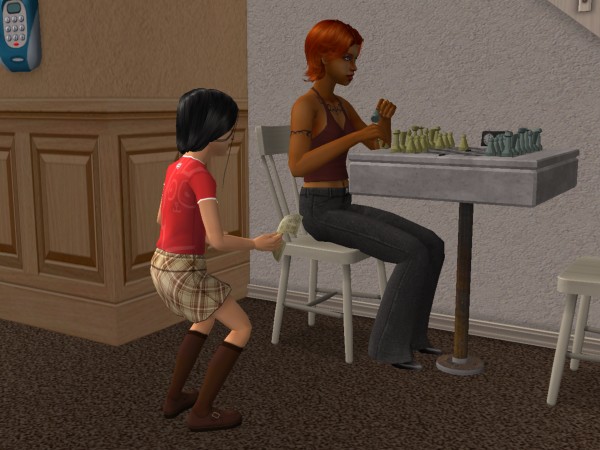 Emma got an A+ in school! 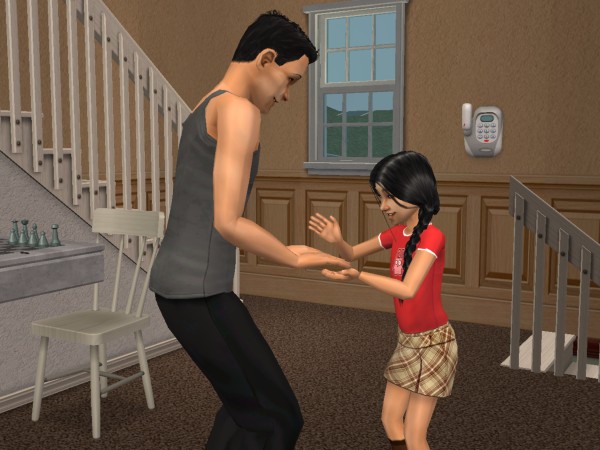 She played some Red Hands with her dad. Another family tradition.

Because I hate it when a plan doesn’t come together, I had Logan try to summon the aliens that very same night… 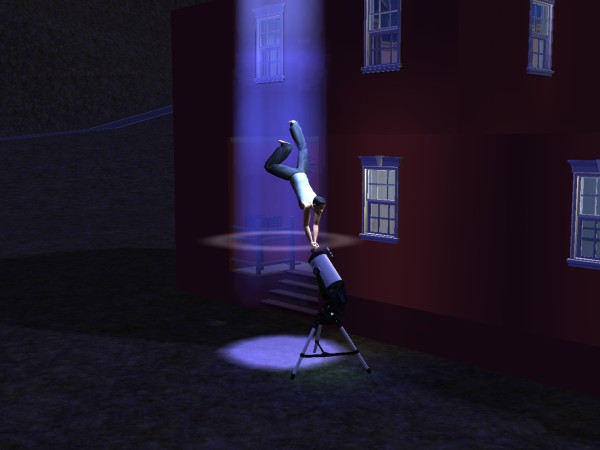 He came back with a lullaby! Yay! 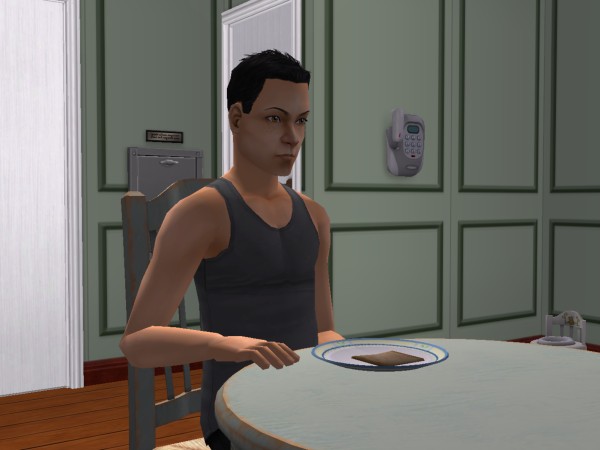 I’m now having a dilemma. I could finish this challenge this generation, by letting Logan and Lauren have 7 (!) kids. That would involve letting them go to college in stages and moving them back in in stages. They could all live there (including the generation 7 spouse) if I move Logan and Lauren out, and (and this is more drastic) move Mandy out as well, along with the bone phone and Cris, of course. Another option is letting the first batch go to college, and by the time they’re ready to move back in, moving the second batch to college. Ah, this is harrrd. I think I’m going to let it all depend on whether or not Logan’s new baby is a girl or not.

Logan took Eric outside to teach him how to walk. It was now spring after all, so they wouldn’t freeze their butts off any longer.

That evening it was Evan’s birthday!

He’s got brown hair! And I can’t really see if he’s got elf ears or not. I think he does, though. Before letting Logan do the stargaze thing, I downloaded a Multi PT hack, so this is the first I’m seeing of it. Evan’s personality is 1/10/10/5/5. He’s a cutie! I don’t like this hair, though, so let’s change that.

Much better. He looks so cute with this hairstyle! 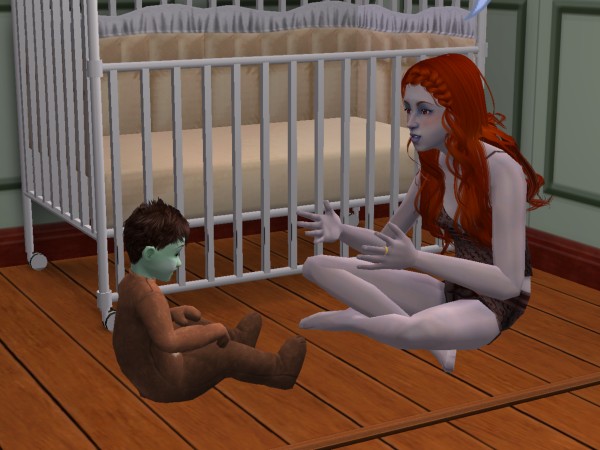 Not gonna lie, things were getting a little bit hectic with three toddlers. Nothing I can’t handle, though, and luckily the twins will grow up tonight.

All three of the boys are absolutely smitten with Tucker, especially Ethan. 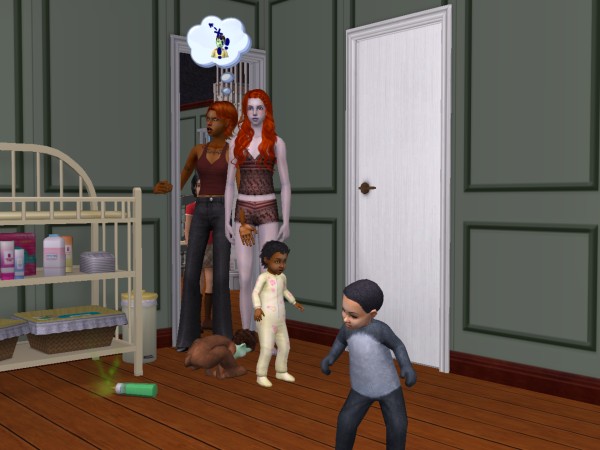 That night, the twins grew up. Good thing, because things had become slightly chaotic. 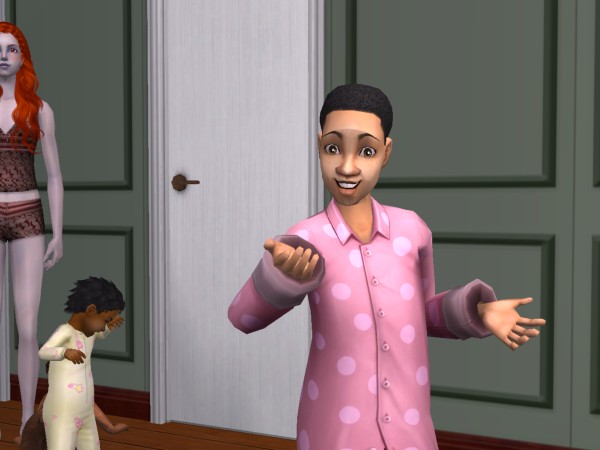 Eric is cute, too, and still looks a lot like his dad. 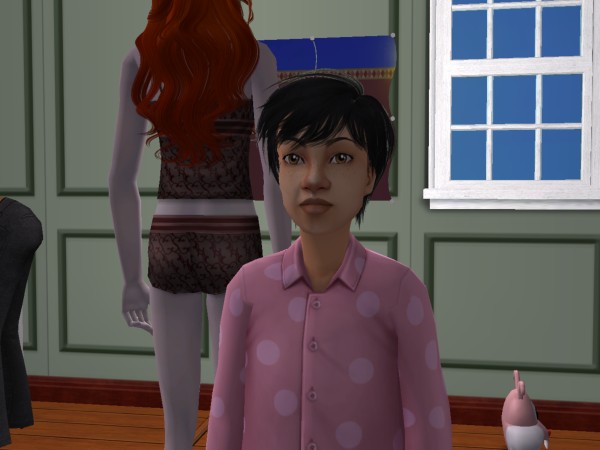 I gave him a new hairstyle, which looks much better on him.

That night, Logan taught Evan how to walk. 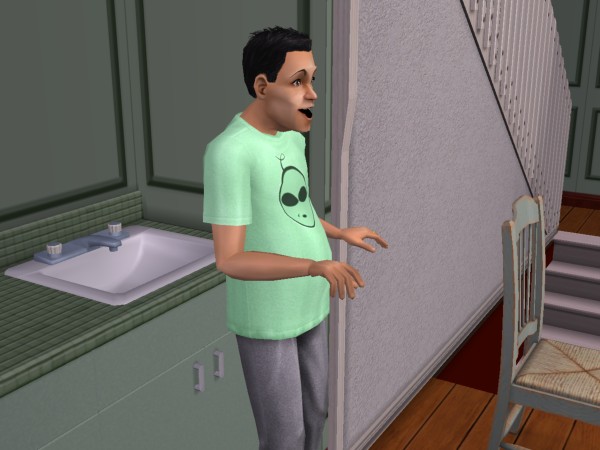 The twins played Red Hands after their first day at school.

Tucker reached the top of his career that day, so Pet Security is now lifted! This means the family can now buy beds with any Energy rating. 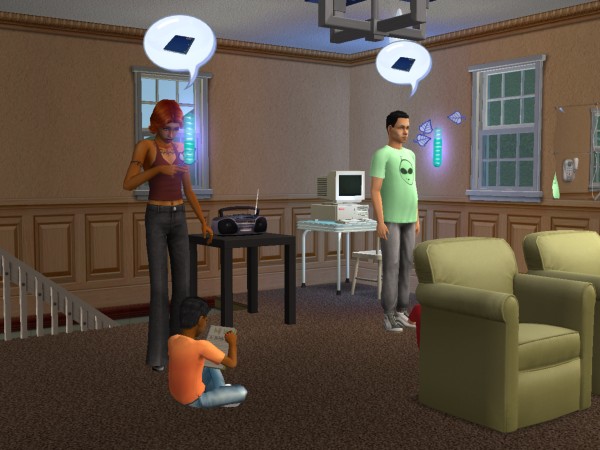 Lauren and Logan helped the boys with their homework.

That night it was Emma’s birthday!

Haha, I used to always use that outfit for teens (back when I didn’t know about downloads), but now I think it’s rather ugly. Although there are much worse outfits.

I gave Emma the dress Lucy grew up in. Now it finally has some use! Oh, and of course Emma’s now a Knowledge Sim, like the rest of her family. She’s still gorgeous!

She also got her own room, and was the first one to get a new (good) bed.

The next morning, Logan went into labour.

IT’S A GIRL! YES. We have our heir, ladies and gentlemen.

Meet Eleanor, or Ellie, as I will call her!

After school Emma played some Red Hands with her father. Although I’m glad to have an alien heir, Emma would’ve been pretty awesome as well. Sorry, Em!

That evening it was time for Evan to grow up to a child!

He’s such a cutie! 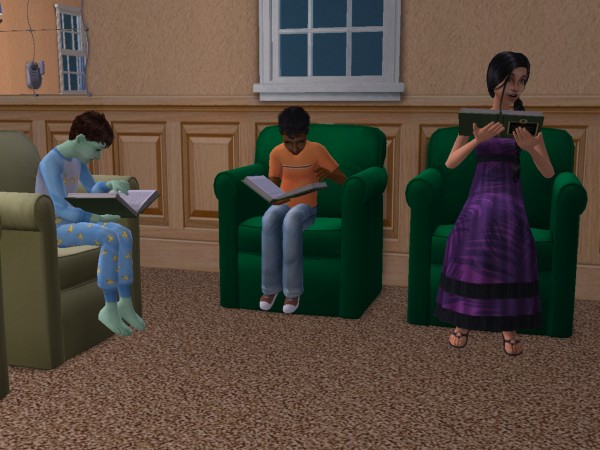 He then immediately joined his siblings in the study corner.

That night, Emma had earned all the skills she needed for the scholarships. 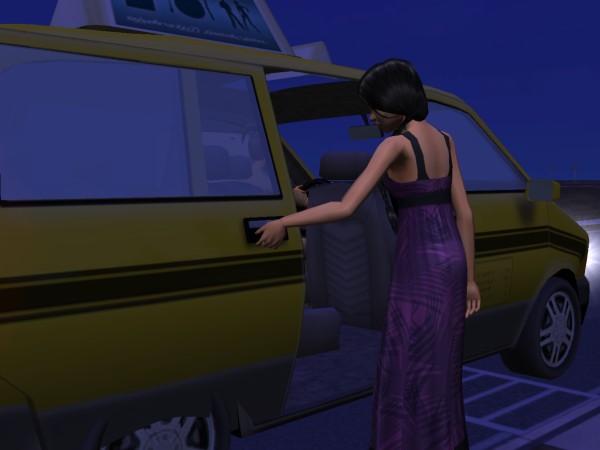 I decided to let her move to college right away, so the house would be a little less crowded.

This is Emma as a college student! I didn’t change the seasons in the university hood yet, which is why it’s still snowy on this lot.

I started expanding the house a bit, but then Emma ran out of money, so we’ll have to finish renovating when the rest of the kids move to college. For now, we’ll leave Emma here and get back to the main family.

That’ll have to wait until the next update, though, because I will leave it here! Thanks for reading and Happy Simming!