An Heroic Apocalypse – Chapter 16: No Time for Romance

It’s been a while, but last time we witnessed the generation 4 children (David, Derek and Deborah) going to college, which was quite a milestone. Also quite boring, though, so we skipped through that rather quickly. After graduating they moved back home, both David and Derek found jobs right away. David will work on lifting Paranormal and Derek will work on Intelligence. Also, for those of you who don’t remember (I don’t blame you), David is this generation’s heir.

Let’s get on with the show! 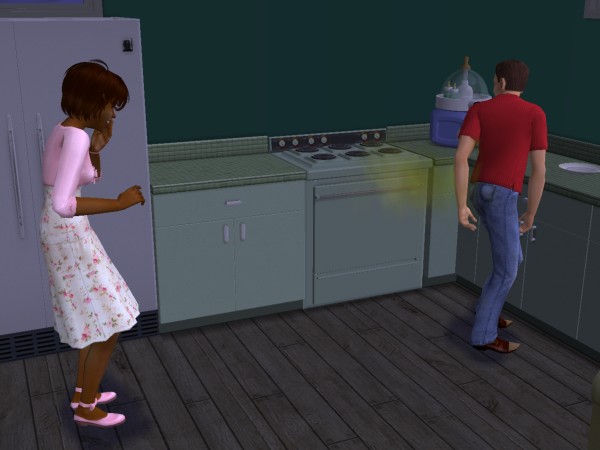 We begin this update with Deborah and David being disgusting. That behaviour will definitely make you win over your future spouse, David!

Derek left for his very first day as a Crime Scene Investigator.

Deb spent the day playing chess with her mother Demi. They both want maximum Games hobby enthusiasm, and since we’re now able to lock wants that’s definitely something to work towards. Especially for Deborah, once she finds a job!

Derek came home with a promotion to Surveillance Operator! He could go back into work right away, so he did. I love how that way you can get multiple promotions in a day, or at least get up the job performance.

David left for his first day as a Tarot Card Reader at the same time. That’s when I realised that him meeting his future spouse (Tiffany Shaw) will be a bit problematic if his hours stay like this (he works during the night), because Mandy can only invite her over in the evening. Or I have to take a little chance and let her be exposed to sunlight temporarily, which probably won’t do too much harm. Decisions, decisions!

After dark, Mandy at least spent some time chatting with Tiffany over the phone, so she would respond well to inviting her over later.

The second time Derek came home from work he didn’t get a promotion, but that’s okay, I didn’t expect him to. He rewarded himself for a hard day’s work with a nice hot bath, and I reminisced about the old without showers or baths… Man, that was tough! 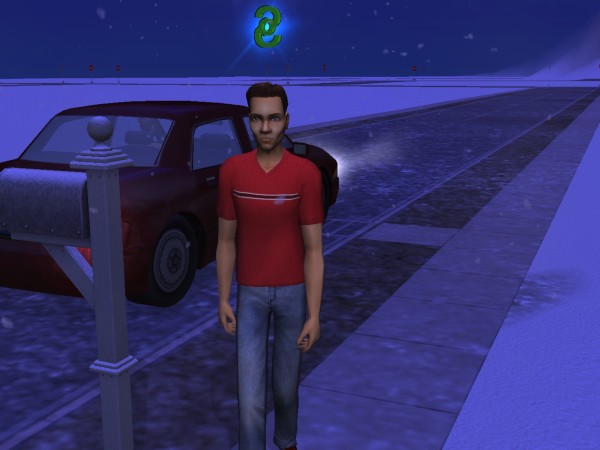 David came home late at night with a promotion to Hypnotist! And his work hours became much more normal so that makes things a lot easier! 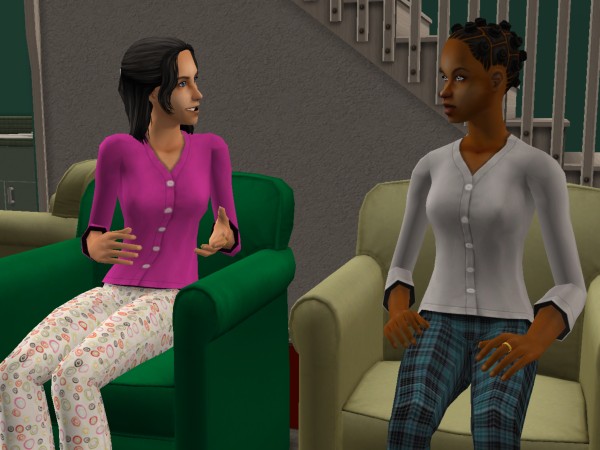 Fiona and Demi have become rather useless and quite boring, to be honest. They’re just getting in the way, really. I’ll probably move them out as soon as David and Tiffany are married. Which’ll be soon, hopefully. 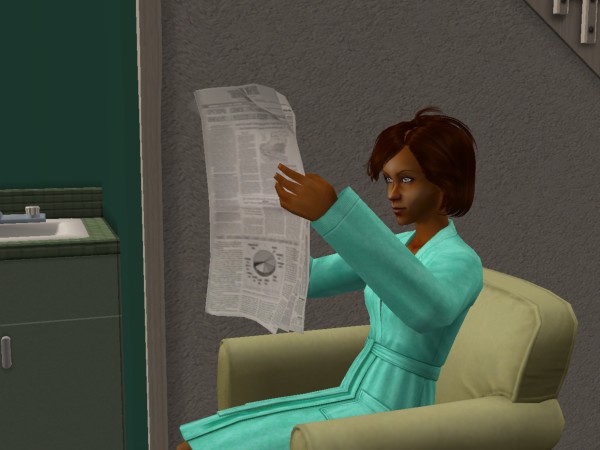 As you might remember (probably not), I wanted Deborah to get a career in Show Business. But then a position in the Law career showed up in the paper, and after some deliberating I went for that one. Just to get it out of the way, so we can get rid of the Slacker restrictions with next generation’s spouse. Deb’s now a Legal Secretary (which is level 3).

Deb went to tell her twin the bad news that they’d have to stay in their horrible clothes for a while longer. And then they played chess all day, which is what happens a lot in this family. Deborah managed to reach the maximum Games hobby enthusiasm, getting her a platinum mood. She won’t go into work for another day and a half, though, so that’ll have worn off by then…

David got promoted again! He’s now a Medium. He could go right back into work, so I made the decision to do that instead of inviting Tiffany over. That can wait for another day. 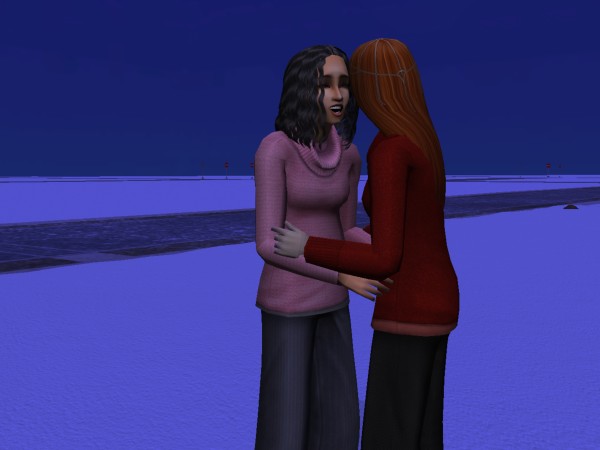 However, I figured Mandy could invite over Tiffany anyway, to hang out together. Perhaps Tiffany will even stay until David has come home and they can bond a little already. 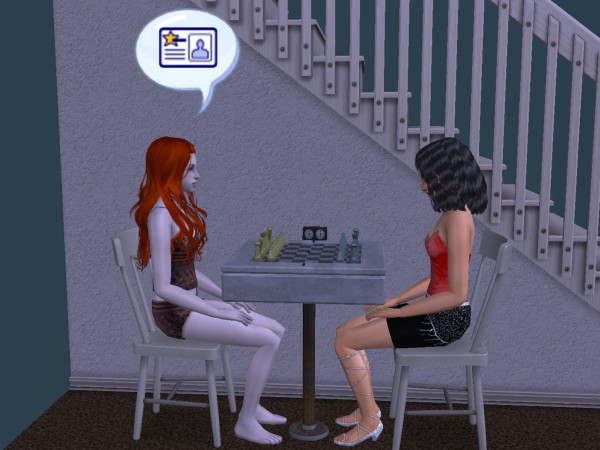 The girls played chess together, while waiting for David to get home. 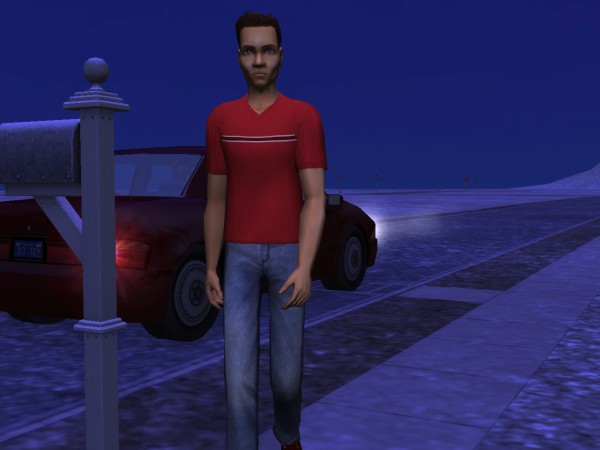 He got home with a promotion! He’s now a Douser, which is level 6 already! 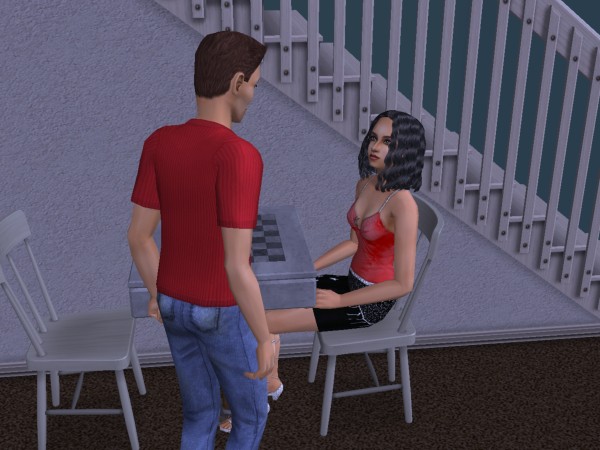 He went inside all excited about his promotion and met Tiffany in a very good mood. They seem to get along well! He’s also attracted to her and started rolling wants for her!

Then she left, though, since it was late. We’ll invite her over again tomorrow! And look, she’s so pretty. That’s a pro, too :-)

That night, when Mandy was playing chess on her own, I noticed she has two bolts with her great grandson David. That’s slightly disturbing. I mean, I know great-grandchildren aren’t shown as family in the game, but that doesn’t make it any less creepy. 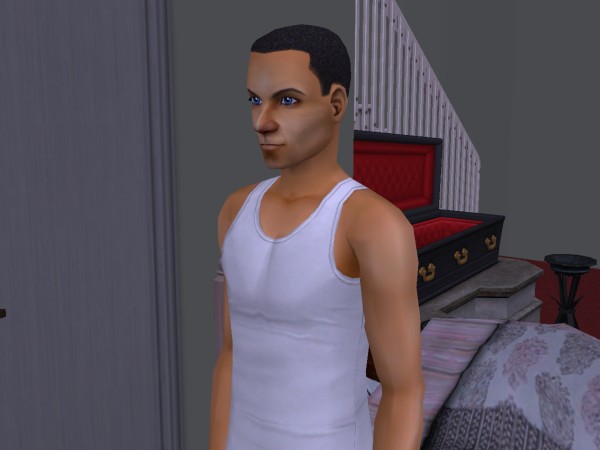 This was also the moment that I realised I’m an idiot. I got David and Derek’s LTWs messed up, so now David has the Paranormal job, while that’s Derek’s LTW. Weell, crap. I’m not going to change it up again now, though, since LTWs aren’t exactly a priority in this challenge. Feel kinda stupid, though.

When it got light the next morning, Mandy quickly called Tiffany before getting into her coffin.

David and Tiffany still get along really well, and she responded positively to his first flirt! Oh, and they’ve got two bolts! They still would’ve gotten married if they didn’t have any chemistry, but it’s nice that they actually like each other.

Yay, pink hearts! Tiffany already got them a bit earlier.

The love birds also became best friends while Derek headed off to work. 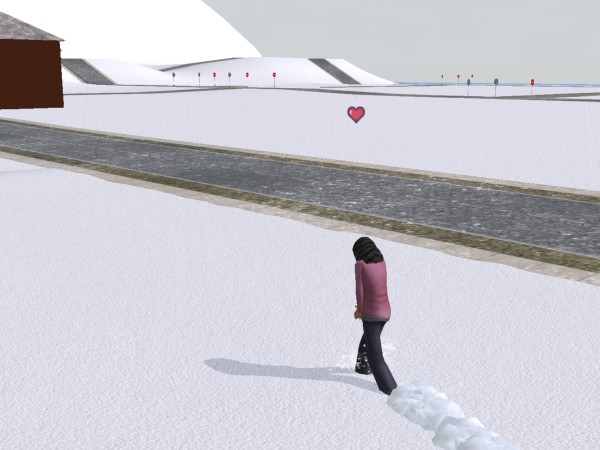 Dammit! Tiffany fell in love the moment she decided to leave because of her low needs… We’ll invite her back later today. So close!

David took a shower and had some food before inviting her over again. Can’t take long now! 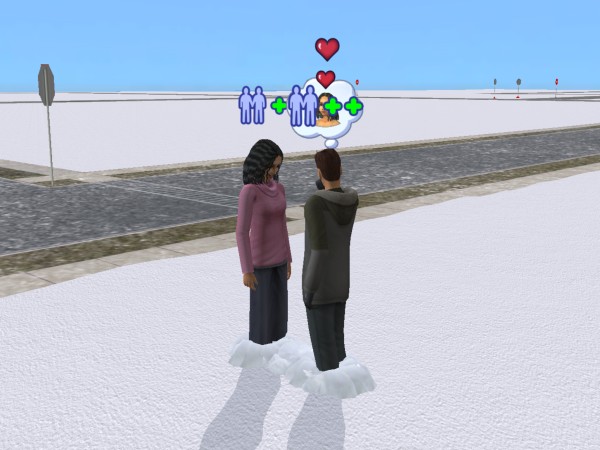 About two seconds after Tiffany arrived David fell in love as well, meaning Tiffany could now move in! (I forgot to take a picture of the move in-hug)

David proposes right away. No time for romance in an Apocalypse! 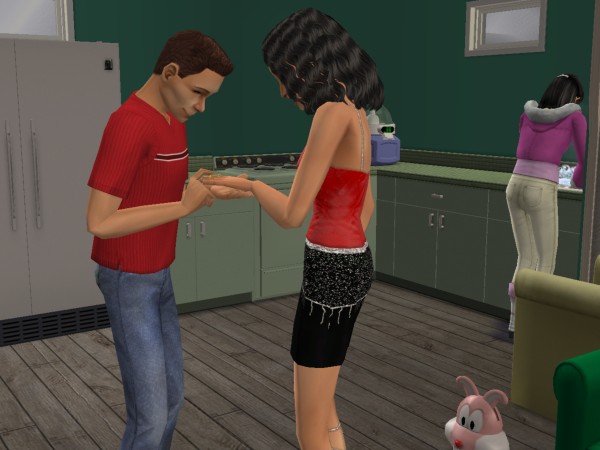 They immediately got married, in the kitchen, while Fiona was doing the dishes and Deborah was just sitting around (out of frame). Apocalypse marriage, no biggie. 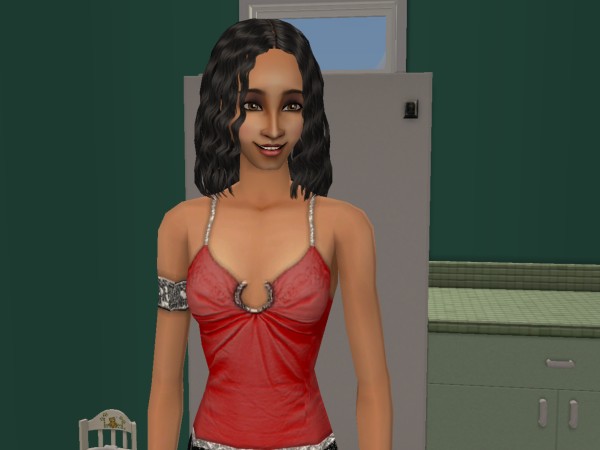 So, let’s properly introduce the generation 4 spouse! This is Tiffany Shaw (now McHero). Her personality is 6/3/6/4/6. She’s at level 9 in the Science career, which she’ll be lifting (obviously) and she has a Family aspiration. Her LTW is to marry off 6 children, which is never going to happen as you might understand.

Welcome to the family, Tiffany! I like you already!

In the meantime, Derek got promoted to Communicator.

All of the generation 4 siblings bonded with each other and Tiffany, who’s now part of the family. However, at the same time Fiona was looking for a new place to live for her and Demi. It’s time for them to leave the main house.

They were going to miss the kids, but it was the right thing to do. They moved in with Flora and her husband Ray. Thanks for everything you did, Fiona and Demi! You were awesome!

Deborah maxed her cleaning skill which brought her into the platinum. Let’s hope that doesn’t wear off before she has to go into work.

Tiffany played chess with Mandy until late in the night since she wasn’t tired and had a day off the next day. Oh, and most importantly; she needed the logic skill.

The couple that skills together, stays together. 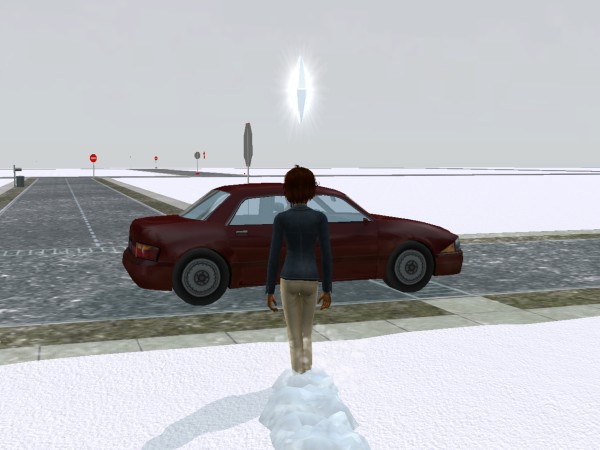 A platinum Plumbbob while going to work can only mean good things!

For some unknown reason, Brandi LeTourneau walked into the house that day… No one in the family even knows her… Of course Derek sent her away right away, as she wasn’t allowed to come in as per Intelligence rules.

Deb got promoted to Legal Biller!

The next morning Tiffany did some last minute extreme skilling to get the last skill point she needed for a promotion. Still not sure if she’ll get the promotion, but this she at least has a chance.

Let’s hope for the best! 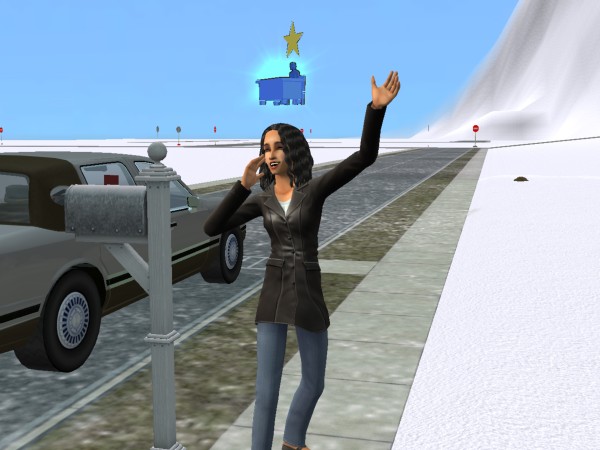 YES! She did it! Tiffany topped and lifted Science! We can now have lights, use the computer for more than just writing, spray those damn roaches and many more things.

Oh, and I can choose another aspiration reward, but I’m not sure yet which one I’ll go for. Honestly, there isn’t anything we truly need at this point.

David congratulated his wife on her final promotion. 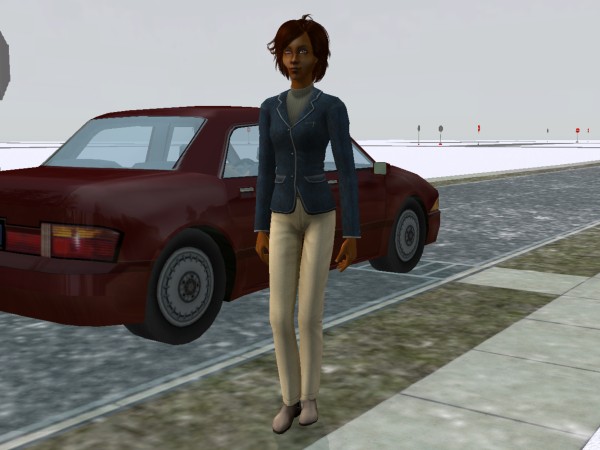 Deborah is the very first Sim in this Apocalypse (aside from Mandy, of course) to ever play a computer game! Milestone!

I figured that since Tiffany had now lifted her restriction, this was a pretty good time to start working on the fifth generation.

Oh, and I heard a lullaby! 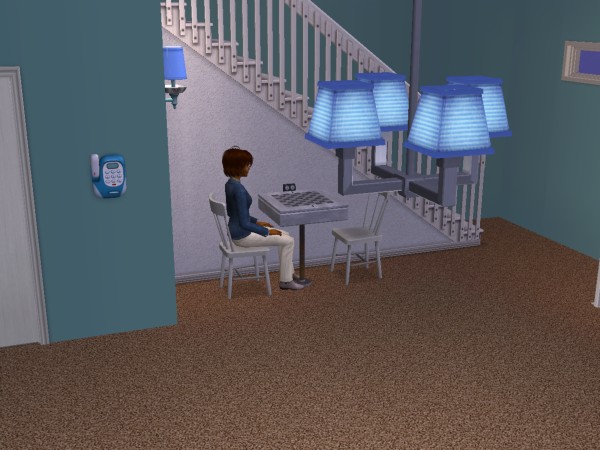 Well, would you look at that! We’ve got lights! It immediately makes the house a lot less grim.

Tiffany decided to quit her job, since she’s pregnant and will be the one to stay home to take care of the baby. Plus, it’s not like they need the money anyway.

And with that I’ll leave you for now! I hope you’ve enjoyed this update. I know I don’t update that often anymore, but I’m definitely still planning on finishing this challenge. I just want it to keep being fun, so I’ll update when I feel like it :-)