Here I am with the second to last update for the second fall on Blueberry Island! This time we’ll visit the Burke family, where last time Angie and Amin got married and threw the first (wedding) party on the island. To earn a bit more money, Amin found a job in Music while Angie got her pet store up to level 4. She also got pregnant, and gave birth to baby girl Madison at the end of the season. 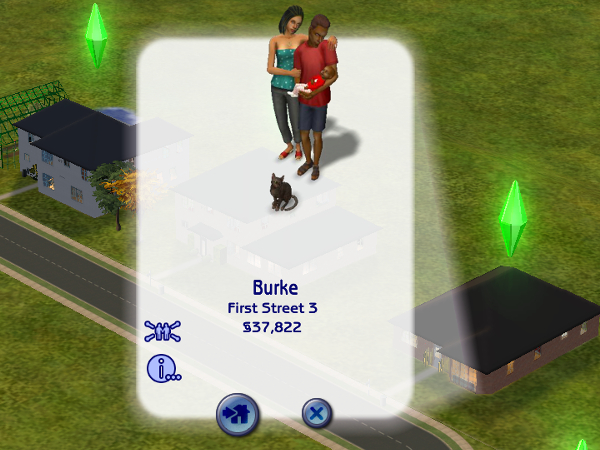 This is what the Burke family looks like right now, Angie and Amin with their daughter Madison, and let’s not forget Mittens, their awesome cat!

Angie started off the season by changing Madison’s dirty diaper. She did so with love! 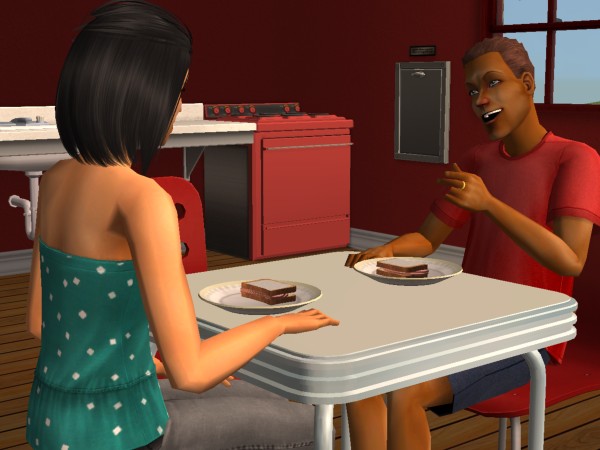 It was Thursday, and Amin had the day off, so the couple enjoyed a nice breakfast together.

Not much later, Angie went over to Angie’s Animal Emporium to do some work.

Once there she invited over Amin to help her by being the cashier.

Withing minutes of opening the store Angie got her silver restocking badge! 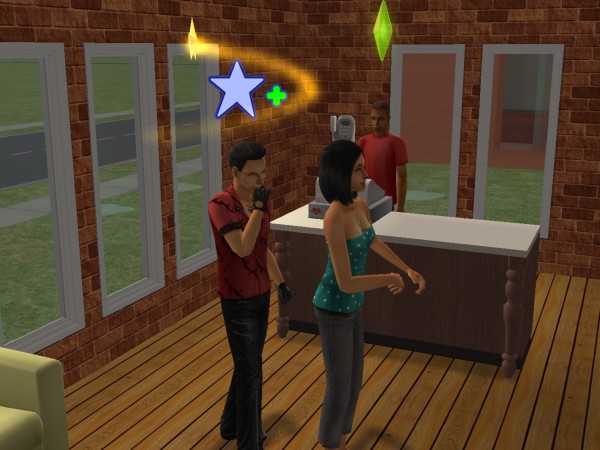 The store was doing quite well, and together they managed to get it to level 5. 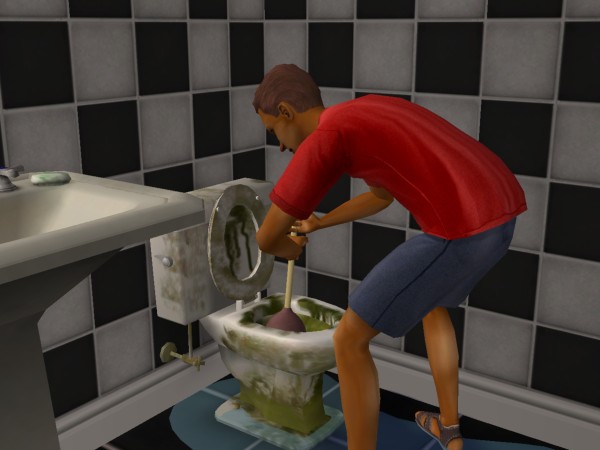 Back home there was enough work to do as well. Amin fixed the broken toilet (which could also use a bit of cleaning…).

I always find the 20 best friends LTW a bit annoying, but I do want to fulfill it for Amin, which shouldn’t be too difficult. I figured it was time for him to get cracking with that LTW, so it was time to make some new friends! Here he greeted Juan Reamon.

Danielle Lillard walked by at the same as well, so Amin greeted her as well (since his chat with Juan went awry straight away). 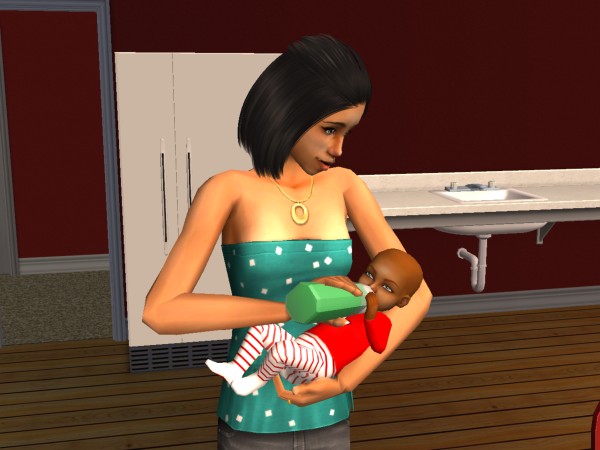 In the mean time Angie spent some time with little Maddie.

Ooh, it’s James Harris! He’s a member of the new family in town. Let’s greet him too!

That evening it was also Madison’s birthday, and Amin and Angie thought it’d be nice to have their guests celebrate it with them. They all cheered Maddie on enthusiastically!

Oh wow, she has red hair! I thought her eyebrows were red when I first saw them, but later I got convinced they were brown. Yay for recessive genes!

Here’s Madison post make over. She’s really cute and seems to be the spitting image of her father. Her personality is 10/1/5/9/10. The poor girl is extremely shy! But also really nice. I love her already! 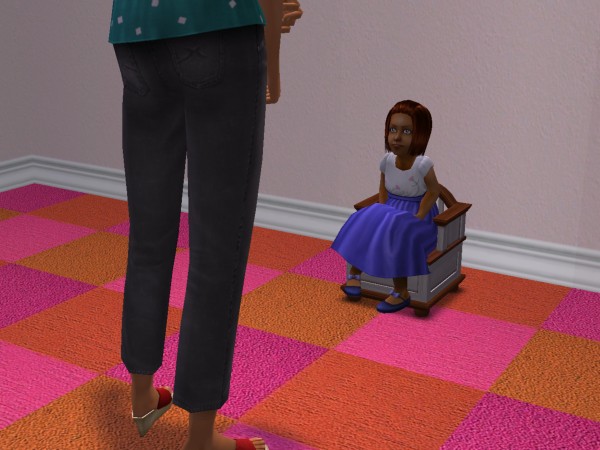 Neither Angie nor Amin were in the gold at this point, so Maddie had to make do without Smart Milk for a little while. 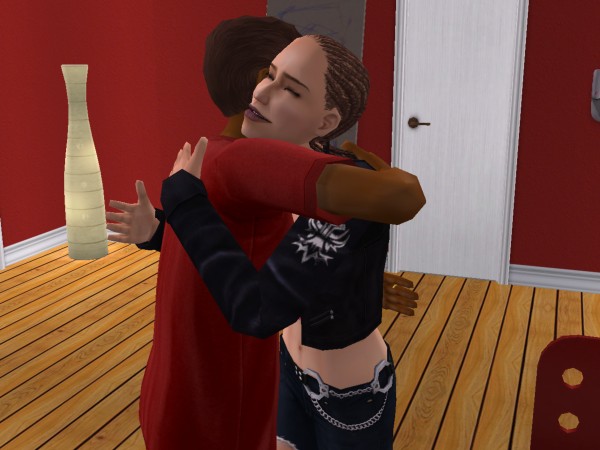 Amin became friends with Danielle, but the evening had been a bit too hectic for him to get to know the other two guests. He’ll try again with them later! 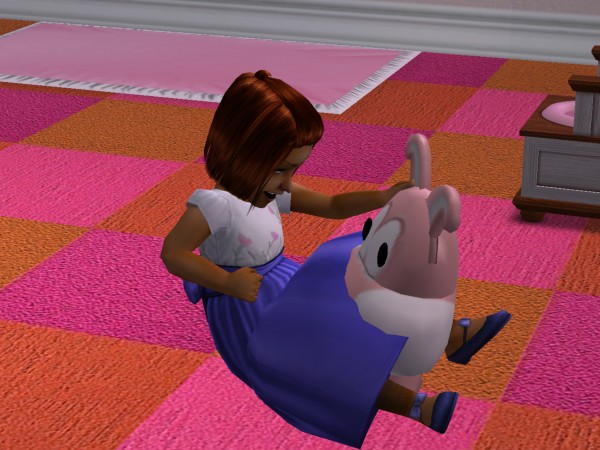 Madison woke up very early the next morning, so she played with her bunny head for a bit until her parents woke up. 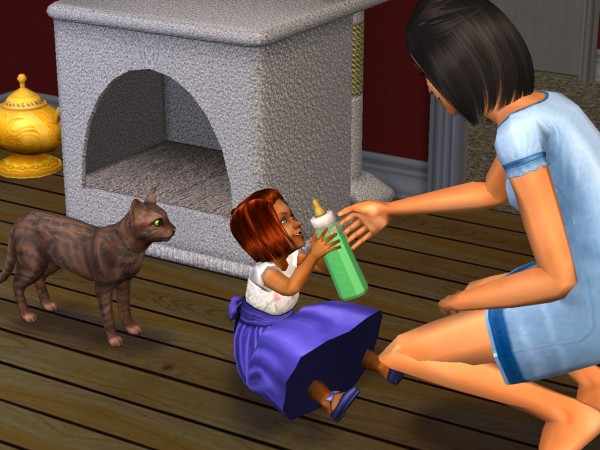 Hey, look, it’s Mittens! He (she? I don’t remember) seems a bit confused by the suddenly grown up Maddie.

Amin played with Maddie for a bit that morning before he had to go to work.

After Amin had left for work, Maddie tried to get attention from her mother, who was playing chess. She seems to be quite a needy toddler; she kept following her parents around instead of playing by herself. 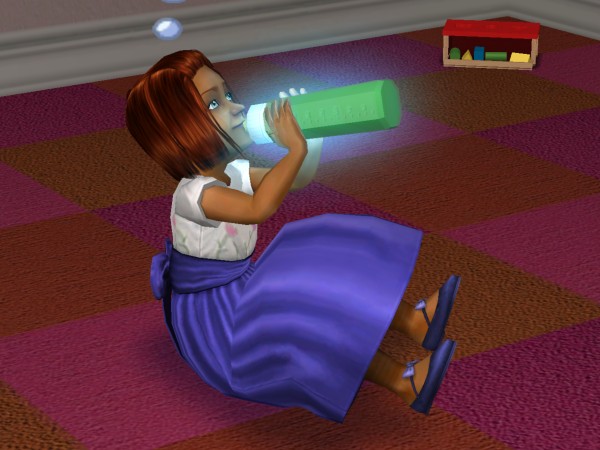 After playing some chess to earn logic points, Angie got into the gold and made Maddie some Smart Milk. She had to go to sleep after that, though, so no use could be made of it right away (but yay for the Smart Milk effect).

Amin got a promotion that day! He’s now a Coffee Shop Sound Engineer. 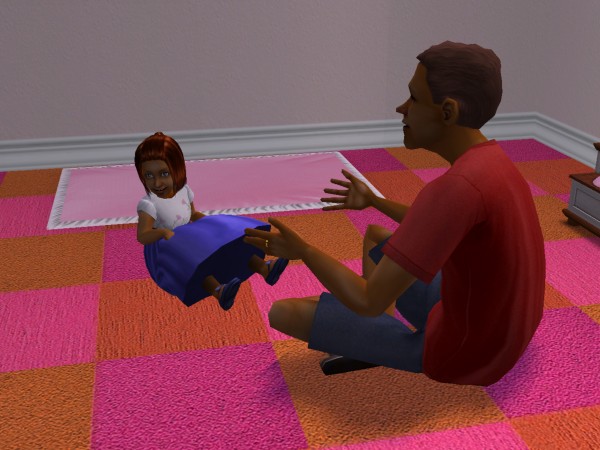 After talking to some friends on the phone, he taught Maddie how to talk. 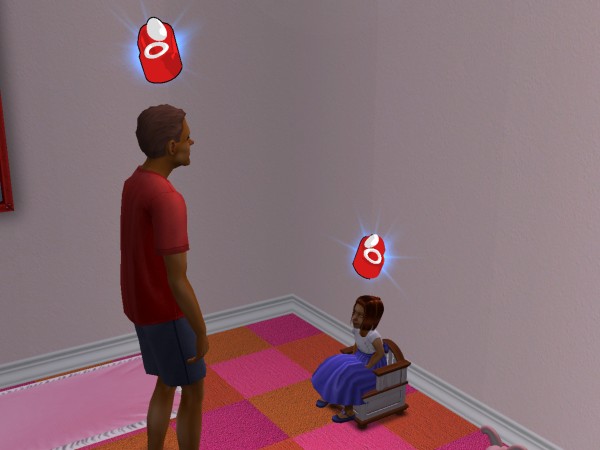 And right after that she also learned how to go to the potty! Progress!

That night: a burglar! 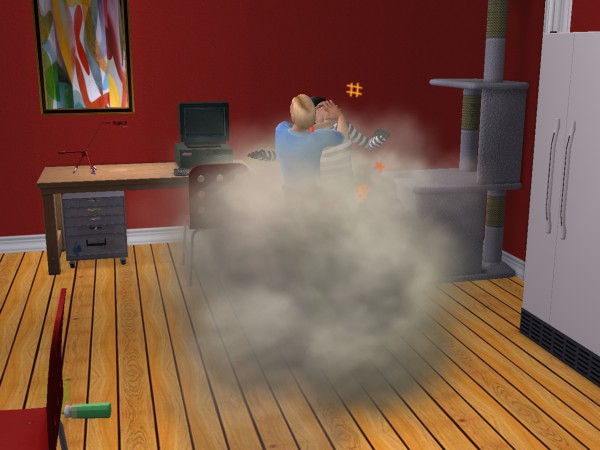 The police arrived really quickly, before the burglar had the chance to steal anything, which is good.

Amin found it imperative that he make his bed before checking out what was going on.

The burglar won the fight with the police officer… But he didn’t take anything, so I don’t really care about that. We’re one burglary closer to another spot in Law Enforcement!

The police officer seems sad. As he should be.

After checking on Maddie, Amin and Angie went back to sleep, despite being quite shaken up. 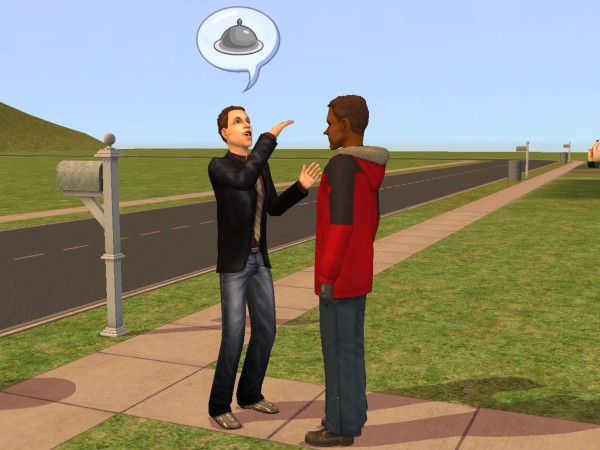 The next day Amin invited Juan over to become friends with him, as he had the wish for it.

Angie spent some time with Maddie, who was also a little shaken up by the events of the previous evening. 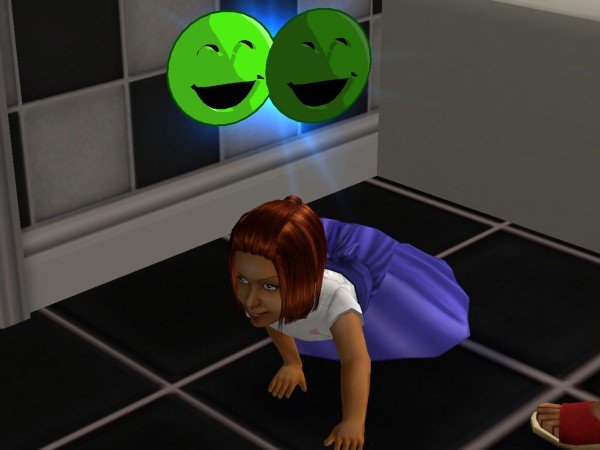 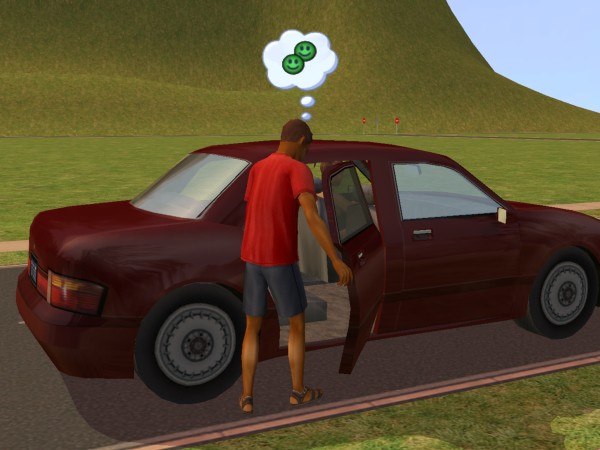 Amin fulfilled his wish of becoming friends with Juan, and then went to work, thinking about how awesome best friends are. 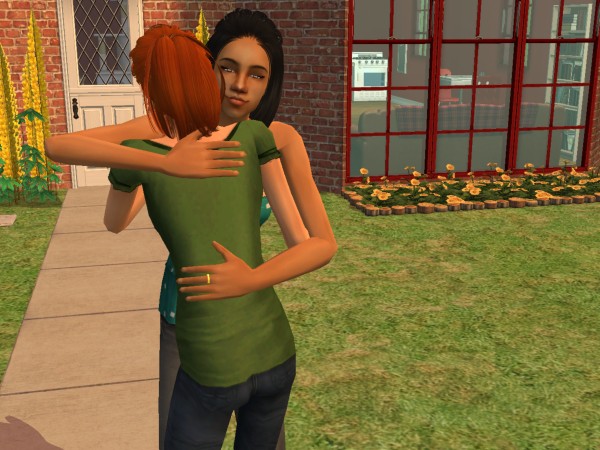 In the afternoon, Angie invited over Julia and asked her to babysit Maddie while she went to work at the store.

I decided to decorate the store a little bit more, both inside and out. It looks cute! 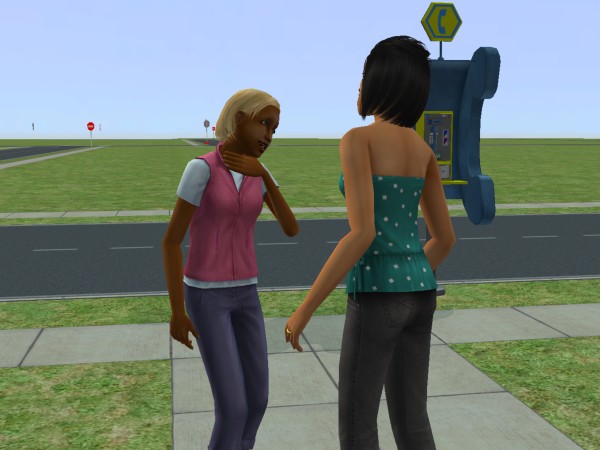 Angie hired Amber Dawn (the same girl Eric Robinson had a date with earlier this season) to help out at the store. At some point I want to hire actual playable Sims (teens, preferably), but I first want to figure out how that would affect their main lot. 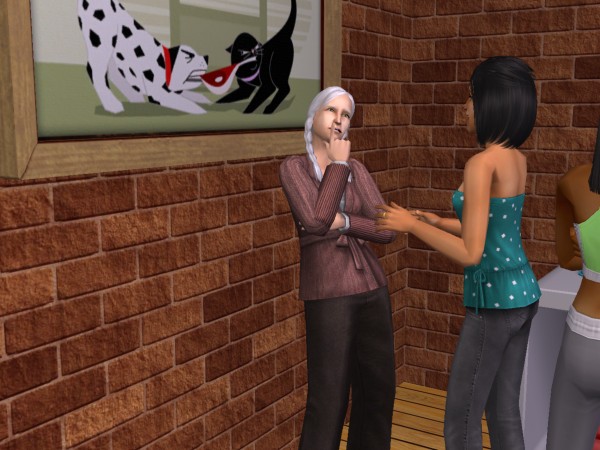 After the first basic sell, Angie earned her gold sales badge! I’m afraid to use the Dazzle option now, though, since it worked so crappy for Andrew Bigfoot.

I forgot Angie didn’t have any cashier badges… She earned a bronze one quickly, but she did have a few impatient customers. Luckily there was no throwing of bags.

Apparently, Amber irritated Julien Cooke during her break, so he complained to Angie about it…

Business went really well, and the store quickly reached level 6! After a trip to the energiser and one last round of restocking, Angie went home.

When she got home she chatted with Julia for a while, thankful her friend had agreed to look after Maddie for her.

And then I figured it was time for a little furniture upgrade! 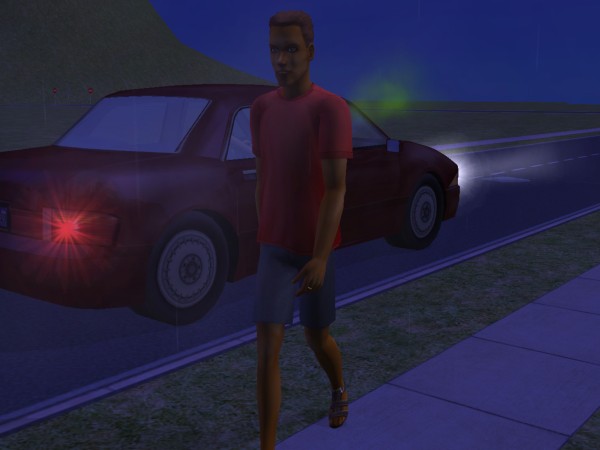 Angie spent the evening teaching Maddie how to walk.

When they had put Maddie to bed, Angie and Amin had some “quality time” together on the couch. 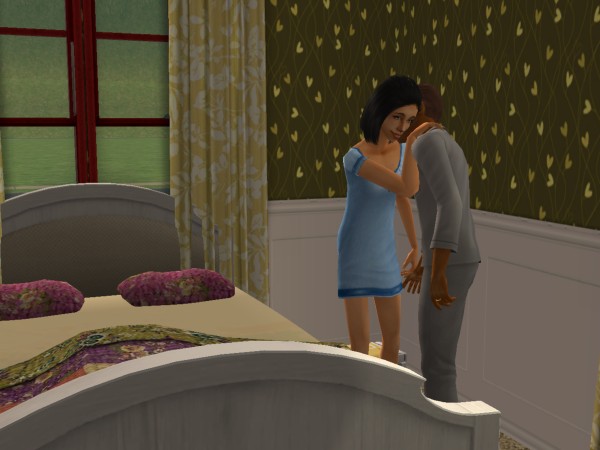 They were still giggly about it the next morning. 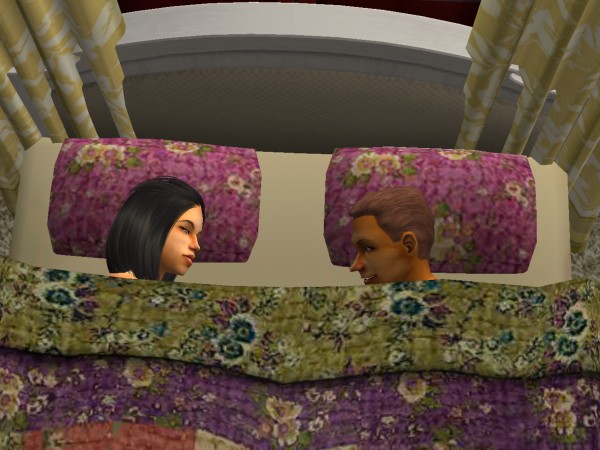 And they had something else to be giggly about a little later! Did I hear a lullaby…?

Except for a LOT of ACR action, nothing much happened that day and the next photo I’ve got is of the evening, when it was time for Madison to grow up!

Yep, she definitely takes after her dad. 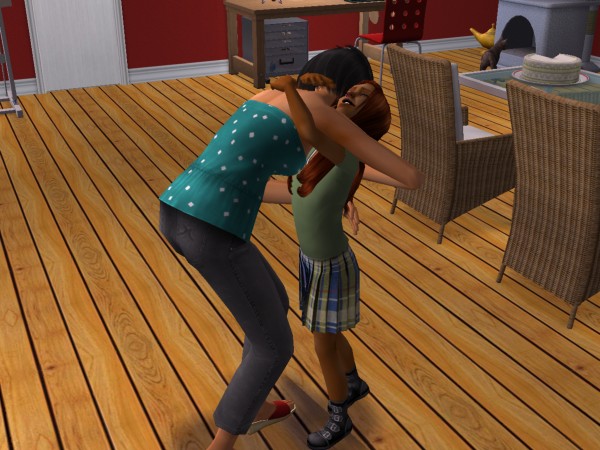 She gave her mum a big hug and squealed when Angie told her there were new clothes in her newly decorated room.

Here’s a close up of Maddie! She really is a cutie. I love those blue eyes, and I’m still stoked about the red hair.

After excitedly checking out her new room and clothes, Maddie went to bed.

Amin played with Mittens for a while before going to bed. Mittens hasn’t been featured that much this update and that makes me feel guilty. He/she is such an awesome cat! 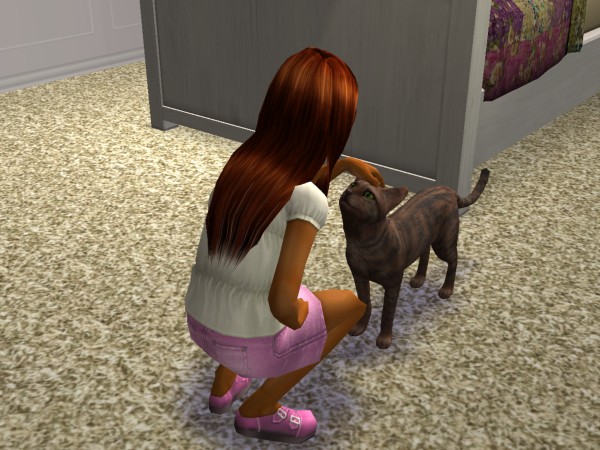 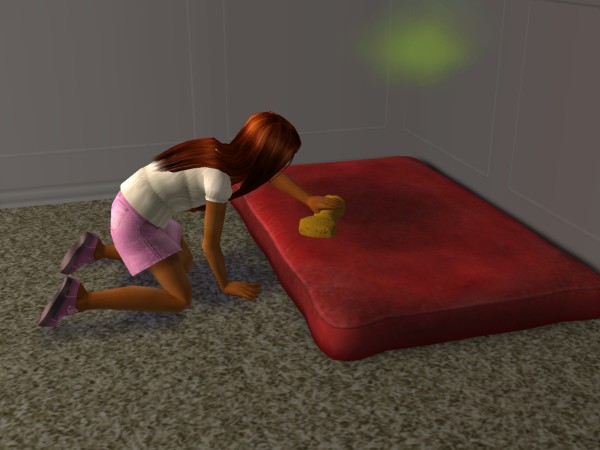 Maddie then decided to help out her mother, who wasn’t feeling very well, by cleaning Mittens’ pet bed. 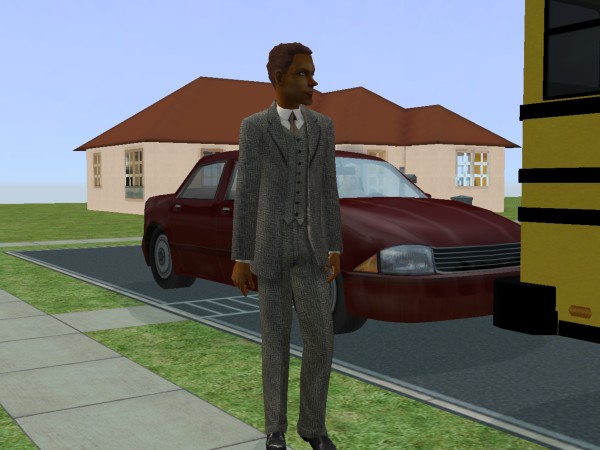 Amin got promoted once again, this time to Battle of the Bands Judge.

Maddie’s fun was in the orange when she got home from school, so she played some Sims 3 before asking Amin to help her with her homework. 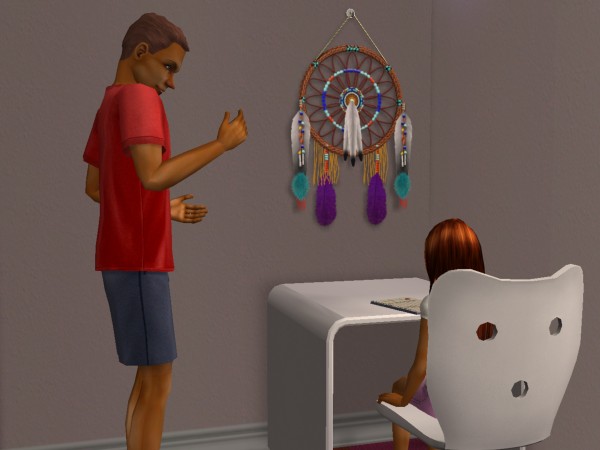 Which he gladly did for his little girl!

Angie got her first baby bump!

Maddie wanted a womrat, and I figures it would make sense for her to have one, since her mother owns a pet store. Its name is Dobby!

Mittens was very intrigued by this little furry creature… 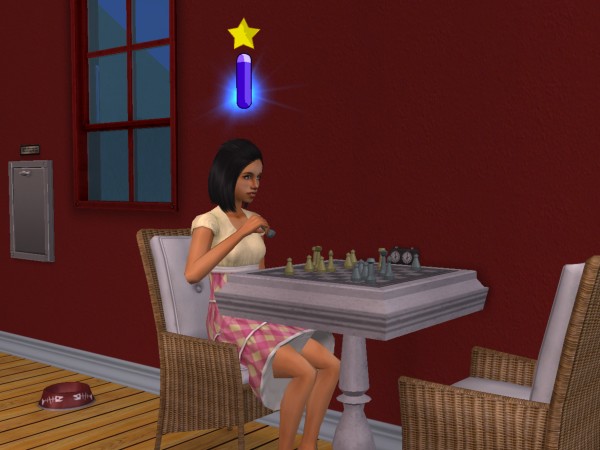 In the evening, Angie maxed Logic!

I later moved Dobby to the living room because he kept waking up Maddie.

And that’s it for the Burke family for this season!

I hope you enjoyed the update, Happy Simming!