I’m back with the last update for the second summer on Blueberry Island! We’ll visit the Burke family this time. As you may (or may not) recall, last time Angie Burke moved in with her cat Mittens, and started a pet store called Angie’s Animal Emporium. That is where she met Amin Sims, with whom she immediately hitted it off. ACR basically decided everything for me in this relationship, and by the end of the season Amin had moved in.

On to the summer!

When Angie and Amin first started hooking up I wasn’t sure if I liked them (Angie didn’t roll (m)any wants for him, but did flirt (and woohoo) with him all the time). Now, though, I absolutely love them together. I like how they just decided everything without me interfering. And they do make a lovely couple!

The first thing to be done after they woke up was paying the taxes, which was $1900 for this household. I then realised Amin had a job (in Politics) so I made him quit it.

Angie played and cuddled with Mittens while Amin was in the shower. I (and she) still love that cat, so I want it to keep getting face time, even if the family expands.

After Amin’s shower, the couple went to Angie’s Animal Emporium. Before opening up, however, they first went on a date to get their aspirations up.

This is also when I found out Amin has a silver cashier badge!

They were able to purchase a dog display and a cat display with the money Amin brought with him when moving in. Now the sims on Blueberry Island can get pets! (I won’t allow them to adopt pets until the population is over 500)

Because of the bad review the store got last season, business was a little slow, but they managed to get the store up to level 4!

Angie got her silver sales badge and also got a networking gift from someone for cheaper furniture! That’s always a nice one.

When they got home, Amin had the want to marry Angie, so I let him propose! 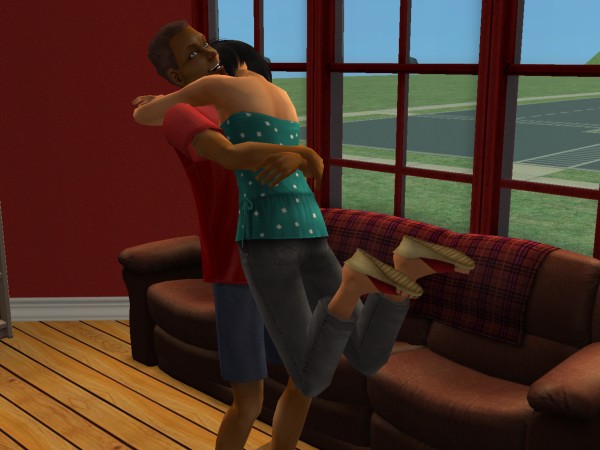 And then they both went outside at the same time to put down a bunch of roses for each other! Must be true love. 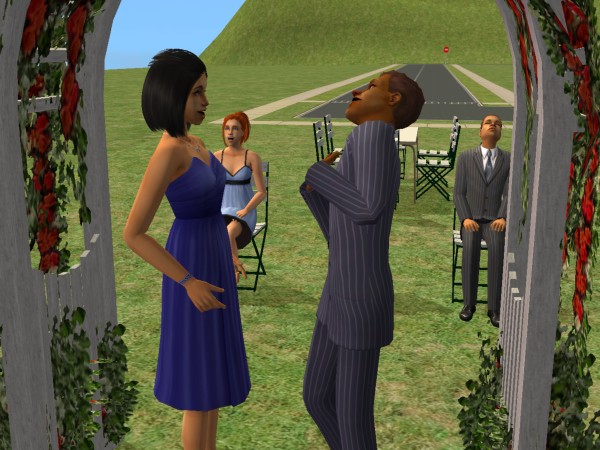 I decided to let them get married straight away, with a small party since they’re both Popularity sims. Also, summer is perfect for a nice outdoor wedding.

In the picture you can see Julia (Robinson) and Angie’s friend Sinjin. Christy Walker is inside eating chips… 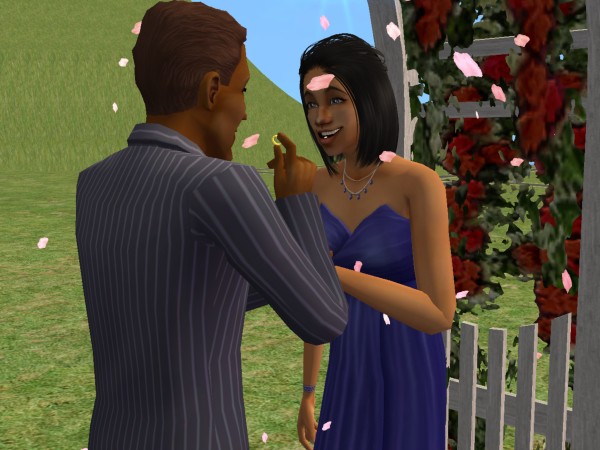 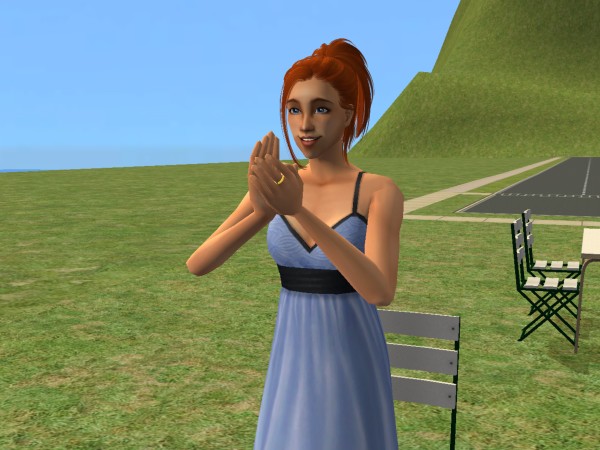 Julia was really excited to see her friend get married. She was also glad she, as the founder, was invited to attend the first wedding party on Blueberry Island.

Amin is not a cake shover! I like the cake shoving, but I find the gently placing a bit of cake in mouth with fork a bit more romantic.

Amin started smustling, and I found out his OTH is Music and Dance. A minute later Angie joined in, and her OTH also turned out to be Music and Dance! Man, these two just keep making me love them more!

The party was a roof raiser, and Angie and Amin greatly enjoyed themselves.

I let Amin take a job in Music. I found it fitting because of his OTH, plus the only other available job was Criminal and I don’t want him in that track.

The two love birds spent their wedding night as it should be spent. ;-) 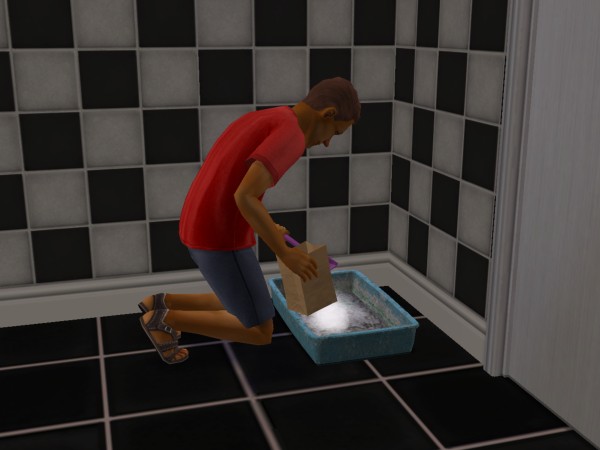 The next morning Amin proved himself to be awesome once more by cleaning out Mittens’ litter box.

Then, the match maker stopped by to give them a magic lamp! This was a big surprise, since is still a very new household, and the Robinsons and Walkers haven’t even gotten a lamp yet.

ACR happened, as always seems to be the case for these two. Risky woohoo got Angie pregnant! I was actually really happy about this, since I’d been doubting whether or not to get her pregnant so soon after the wedding. And, once again, they decided for me! 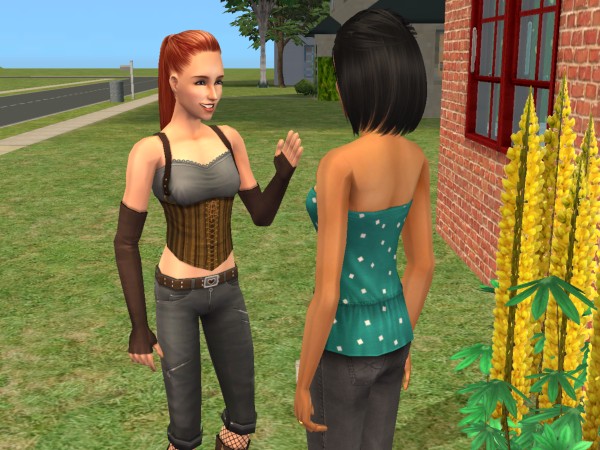 Angie greeted Kaylynn Spitzig and they got along great!

Amin rolled Grilled Cheese as his Secondary Aspiration, and he only had GC wishes, so he made some for Angie and Kaylynn.

They all enjoyed it together, while talking about babies. It seems like Angie is excited to become a mother!

Angie and Kaylynn became friends, but they said goodbye soon after lunch becauseAngie was feeling quite tired.

She took a nap, together with Mittens.

I love how well Amin and Mittens get along together!

In the night from Sunday to Monday I realised I forgot to put in alarms, so I quickly did.

The next morning, Amin lectured Angie on clogging the toilet…

I thought that wasn’t very nice, so I made him unclog it himself. :-)

I also think it’s kind of nice they have little arguments like that – makes it more like a real relationship. 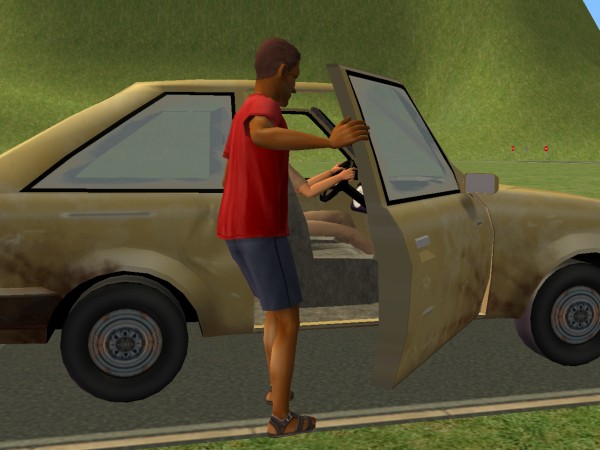 After unclogging the toilet, Amin left for his first day as a Record Store Clerk.

And Angie puked all over the toilet he just cleaned, haha. 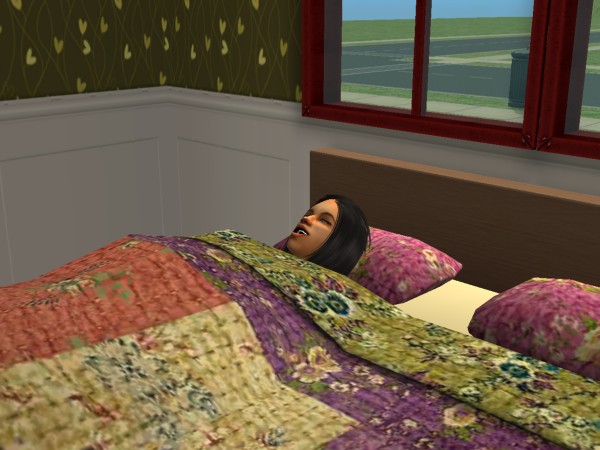 She gets tired pretty fast, so she mostly spent the day napping.

She also played some chess, since she’s very low on skill points.

Amin got promoted to Piano Tuner! 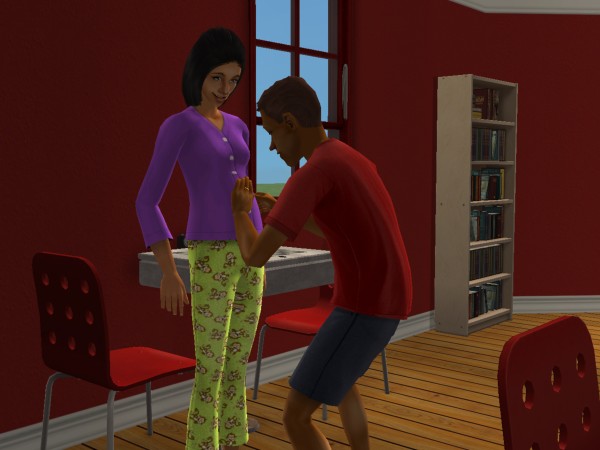 He was excited to see Angie had gotten her first baby bump, and the litte argument they had in the morning was completely forgotten.

He had a wish to dance with someone, so the slow danced together. I love this couple! I think they’re my favourite couple in the neighbourhood. They’re just so meant to be. :-) 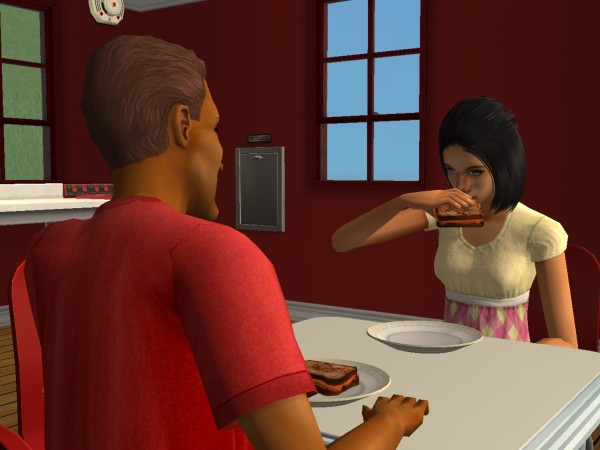 The next morning they had grilled cheese for breakfast. I think that will happen quite often… 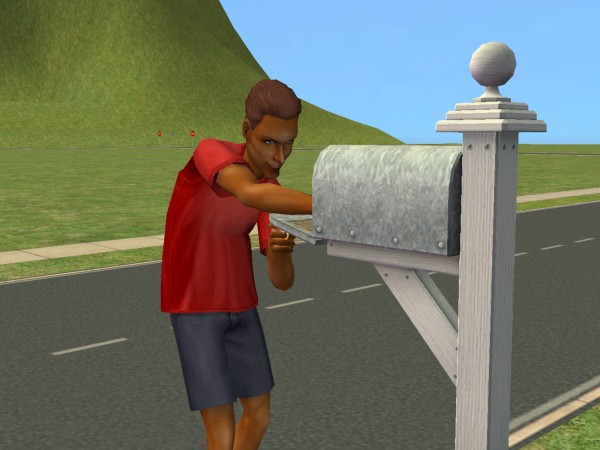 His LTW is to have 20 best friends, so I let him call some of  the friends he already had, and had a life time relation over 50 with. Most of them were at work, but later on he managed to reach them all. Instant best friends! 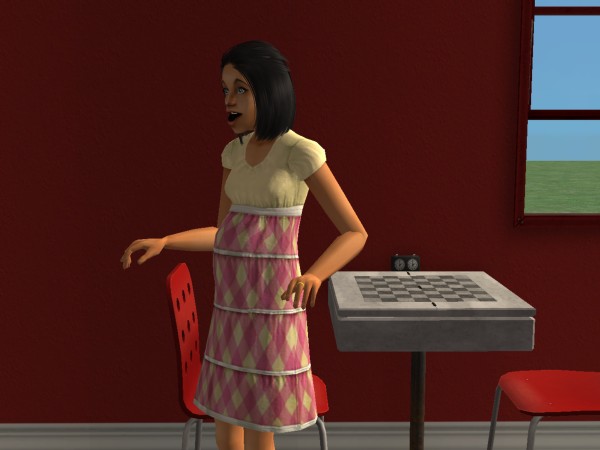 Mittens being cute with his little toy mouse :-)

Nothing much happened that day; this picture is from the next morning. Early morning cuddles for Angie and Mittens.

Amin went to work, feeling a bit anxious, since Angie might go into labour at any moment.

Angie took a midday nap. This pregnancy really took it out on her.

But then, halfway through her nap, she was rudely awakened by labour pains!

It’s a baby girl, called Madison! She has her father’s skin colour, both their eye colour and I can’t really make out if those eye brows are red or brown (anyone else got a clue?). They look pretty red, which would mean Amin has recessive genes as well. :-)

Angie cuddled with Madison for a little bit, while I quickly built an addition to the house. 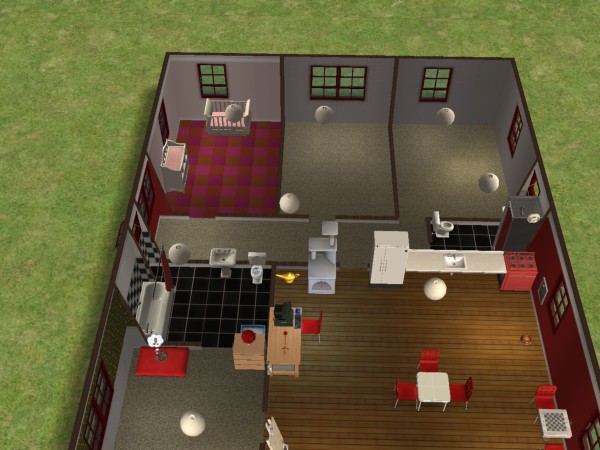 They got enough room for the family to expand further!

Angie put Madison in her crib, and decided to take a nice bubble bath in the new bath tub.

When Amin got home he immediately went over to Madison’s nursery to meet and cuddle her, over the moon to finally meet his little baby girl.

“We have a great life here on Blueberry Island, don’t we?” Amin said that night before they went to sleep.

“Yes, we do. And a wonderful little family.”

And that’s all for the Burke family, and for Summer 2! I hope you enjoyed, and Happy Simming!